Nancy Pelosi may be back holding the gavel with a vengeance wanting her crumbs back from the taxpayers. 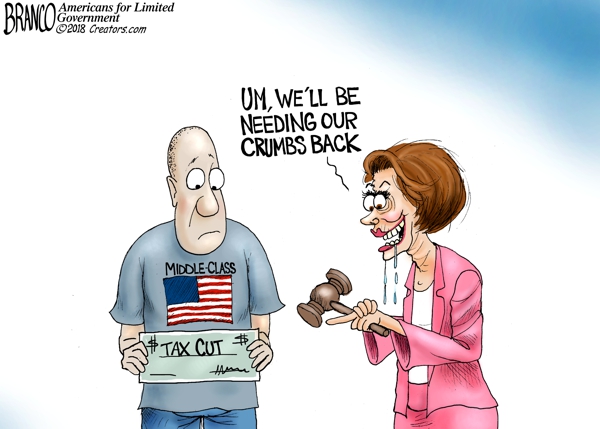 Economists Credit Trump For Booming Economy, Growth Will Continue In 2018 Thanks To Trump’s Tax Bill

CNBC’s economic survey released prior to Christmas showed that for the first time in over a decade a majority was optimistic about the economy, and there was a shift as to who should receive credit for it: Donald J. Trump. The economic growth for the fourth quarter was near four percent. Over 100 companies gave bonuses of at least $1,000 or more to over a million workers, even some part-timers got a piece of that action. The GOP tax bill, which the Left said was going to be a prelude to Armageddon, was exactly the opposite for the American worker, who the Democratic Party decided to bet against to try and undercut Trump. Over 90% of middle class Americans will be receiving a tax cut. The Democratic Party is going to have to explain that move, especially when this tax bill becomes more popular.

As for the economy, economists said we should expect to see unemployment continue to go down and the economy to grow in 2018. Economists credit two things: President Trump and his tax bill. For Obama, his polices received good grades for providing financial stability, though they led to anemic economic growth and job creation  (via WSJ):

Economists surveyed by The Wall Street Journal say President Donald Trump has had generally positive effects on U.S. economic growth, hiring and the performance of the stock market during his first year in office.

The professional forecasters also predicted 2018 would see solid growth and a continued decline in the jobless rate. One factor: the tax cuts signed into law by Mr. Trump in December, which most economists say will boost the economy for several years at least.

More broadly, most forecasters surveyed by the Journal suggested Mr. Trump’s election deserves at least some credit for the economy’s recent strength.

Asked to rate Mr. Trump’s policies and actions to date, a majority of economists said he had been somewhat or strongly positive for job creation, gross domestic product growth and the stock market. Most also said he had been either neutral or positive for the country’s long-term growth trajectory, while his influence on financial stability was seen as largely neutral.

“There is definitely a sense in the business community that the president’s actions on taxes and regulations have led to a more pro-growth environment for them to operate,” said Chad Moutray, chief economist at the National Association of Manufacturers.

A year ago, President Barack Obama got mixed grades as he prepared to leave office after eight years. Most economists surveyed by the Journal in January 2017 saw his policies as positive for financial stability, positive or neutral for job creation, negative or neutral for GDP growth and negative for long-term potential growth.

Democrats are confident about the 2018 midterms. With the current numbers now, they should be—but we’re 10 months away from the midterms elections. Anything can happen.

The truth about Robin Hood is that he stole the people’s money back from the Government and returned it. Much in the way Trump is doing with tax cuts.

Obama and the Democrats say a rotten economy with no job growth is the new normal, but President Trump is proving them wrong. 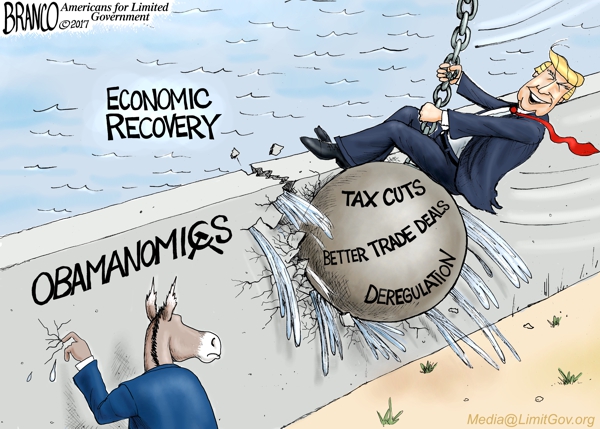 WSJ: The Tax Cuts Will Grow the Economy by Much More than Expected


Tax cuts are going to grow the economy by much more than expected.

That’s the verdict of the Wall Street Journal‘s prestigious “Heard on the Street” column. Importantly, Heard on the Street is run by the news side of the WSJ, not its tax-cut loving editorial page. So there’s no particular pro-tax cut or pro-Republican bias at work here.

There were several surprises for investors when Republicans unveiled their final tax bill Friday, but the most significant is that they add up to a bigger boost to economic growth next year.

The bigger stimulus could fundamentally change how the market behaves in 2018. Sales and profits will be stronger than most investors expect. But with the unemployment rate low, wage pressures will mount faster, and inflation should pick up more. If the tax plan passes, as seems likely, it could lead the Federal Reserve to raise rates faster, putting the bond market at risk.

The tax plan was always expected to juice the economy, but the Senate version, which passed after the House approved its bill, had relatively modest short-term stimulus. While the stock market kept rising in anticipation of a cut, the bond market hardly budged. The bill unveiled Friday front-loaded more than $200 billion in stimulus for next year. Economists had been penciling in a boost of about a third of a percentage point next year. Now that is looking way low.

Some of the pro-growth changes include eliminating any delay to the corporate tax cuts, lowering of the top individual rate, lowering rates for most taxpayers, and increasing the child tax credit. The latter is particularly important because middle-class households are “more likely to spend extra income than the rich.”

The tax bill could increase GDP by 1.3 percent, Lahart writes.

That’s an additional full percentage point gain from what economists had been expecting based on earlier bills.

(Full disclosure: I used to work for Heard on the Street and consider Lahart a personal friend. He’s had me over to his apartment for fish.)

This. Could. Be. HUGE. President Trump’s Treasury Secretary, Steve Mnuchin, broke some big news during a speech to the Washington forum on Wednesday afternoon. Mnuchin told the audience that the Trump administration would soon be proposing, and then hopefully passing, the “biggest tax cut” and “largest tax reform” in American history.

“This is going to be the biggest tax cut and the largest tax reform in the history of our country,” Mnuchin said, as administration officials prepare to outline Wednesday afternoon what he described as “principles” of their tax plan.

Mnuchin, speaking at a Washington forum, would not reveal many specifics but confirmed that they want to lower the business rate to 15 percent.

“I will confirm that the business tax is going to be 15 percent,” he said. “[Trump] thinks that’s absolutely critical to drive growth.”

Mnuchin also said the administration wants to “do the whole thing,” and not pursue tax reform piece by piece.

While there are concerns that such a large package would hurt government “revenue,” Mnuchin did not seem concerned by the possibility. He argued that economic growth would more than cover the possible shortfalls. Sadly, such a response (while probably right) won’t help the administration get the tax cuts (and reform) passed the Democrat minority, particularly in the Senate.

Speaker of the House Paul Ryan (R-WI) agreed with Mnuching that growth would increase exponentially if the GOP reforms are passed.

Larry Kudlow explained on CNBC that the tax cuts would pay for themselves.

Earlier in the day, the Nasdaq  seemed to presage Mnuchin’s comments as it soared past 6K for the first time. Ever.

ABOUT THE AUTHOR: Onan Coca

Onan is the Editor-in-Chief at Liberty Alliance media group. He’s also the managing editor at Eaglerising.com, Constitution.com and the managing partner at iPatriot.com. Onan is a graduate of Liberty University (2003) and earned his M.Ed. at Western Governors University in 2012. Onan lives in Atlanta with his wife and their three wonderful children. You can find his writing all over the web.

I guess I could tell you that Scott Walker inherited a huge deficit and in the middle of the Obama depression, he cut Corporate taxes, survived Democrats efforts to throw him out of office, listened as liberals said he did know what he was doing and promptly turned things around with a Reagan-esque flair.

Wisconsin Governor Scott Walker is proposing $800 million in tax cuts, representing most of the state’s $912 million revenue surplus. Half of the cuts will be achieved through property tax reductions, and the other half will consist of lower payroll taxes, as well as lower income tax rates for the lowest state bracket.

“What do you do with a surplus?  Give it back to the people who earned it.  It’s your money,” Walker will tell the state legislature in his annual “State of the State Address,” according to an excerpt released to the press. The tax cuts will be a core part of Walker’s new budget for the state, entitled the “Blueprint for Prosperity.”

Walker has presided over a remarkable turnaround in Wisconsin’s finances. When he took office in 2011, the state was running a $3.6 billion deficit. One of his first acts was to pass a corporate tax cut, which Democrats derided as a giveaway to the rich, but which helped grow the local economy and attract businesses and jobs.

The collective bargaining reforms that Walker subsequently enacted, over vehement Democrat and union opposition, also helped state and local governments save money while preserving public sector jobs. To that achievement, Walker can now add a tax cut–something few other governors, even Republicans, have achieved.

Wow – shocker of shocks! Tax credits stimulate the economy and Democrats call you names when you don’t do what they want? Even when Barack Obama is trying to destroy the nation, you can prosper, it turns out. These Dems are not long for the country, because unlike their predecessors, they’re not helping at all. They’re working against us.

One group of potential candidates for president probably won’t be shuffling off to Iowa, New Hampshire or other early campaign spots in the new year. They’ll be hunkered down in statehouses across the Midwest, pushing bills through their legislatures. Few outside their home states will notice, but these governors and their policies could wind up in the national campaign picture. Scott Walker of Wisconsin, Mike Pence of Indiana, Rick Snyder of Michigan and John Kasich of Ohio were all elected after Republicans began taking political control of the middle of the country back in 2010. Since then, they have offered a glimpse of what some conservative policies would look like if put into wider effect. Should any of these governors join the race for the White House, their state records would become their chief qualification for higher office and might provide some distance from partisan battles in Washington. The governors could also benefit from being in a region rich with swing states.