To Infinity and Beyond

For the sake of bipartisanship, 2018 government spending will be through the roof to its highest level yet. 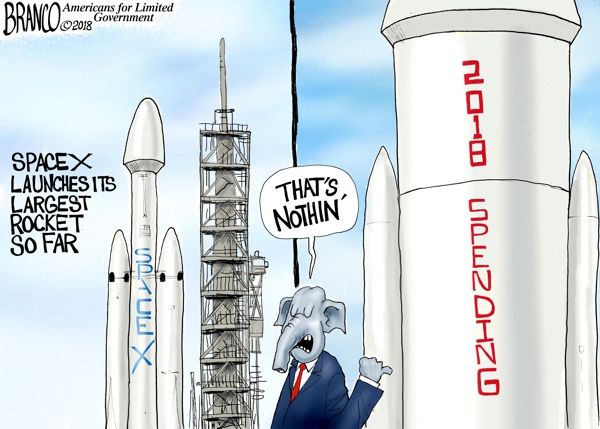 The media and North Korea have a lot in common, they both hate Trump and want to see him gone. 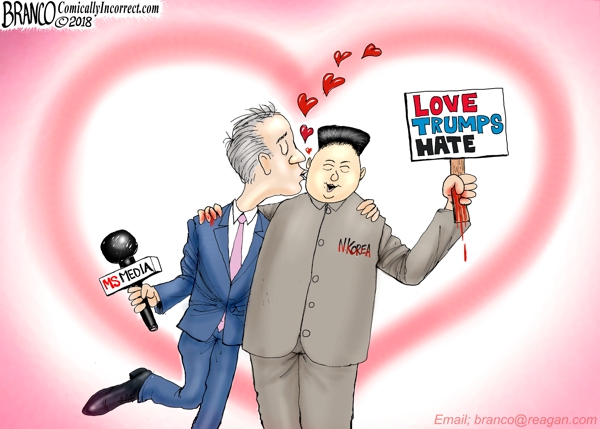 State of the Union Addresses are usually full of carefully-crafted platitudes presenting the president’s agenda in a unifying tone from a position of strength. Typically, no new ground is plowed at these events. In recent years, they have fallen flat for presidents of both parties. But given that Trump is such an unconventional president, a conventional policy speech — carefully crafted with a serious but upbeat tone — is exactly what he needed in order to recover his stalled momentum.

In many ways this was the best speech he has given to date. In fact, it was a perfect presentation of his agenda. To be clear, not all of his agenda is conservative, but that is already baked into the cake. Amidst a month of endless muddled messaging, ramblings about the media, Republican infighting, and competing factions within his own administration, last night was his only opportunity to take his message directly to the American people. It was also a time to move beyond campaign rhetoric and embrace the reality of his party controlling all of government and the need for a forward-looking message.

Here are my quick observations on the policy aspects of the speech, divided into what conservatives should consider good and bad..

Coming into the speech, rumors were swirling in the media that Trump would embrace some sort of amnesty. Not only did that not occur, but Trump reclaimed the term “immigration reform” and used it to describe what the word truly means: finally restoring our immigration system to its historical values before Ted Kennedy destroyed it. That means only admitting immigrants who love our values, do not become a public charge, and do not threaten our way of life. It also means implementing a sane legal immigration system that is not based on chain migration. He put Democrats on defense so that they will have to explain why they oppose merit-based immigration.. For those of us who’ve worked on this issue for years, this speech was just what the doctor ordered.

Trump spoke to the morality, not just the legality, of his immigration moratorium, which we called on him to do earlier this week. As Trump said,

“It is not compassionate, but reckless, to allow uncontrolled entry from places where proper vetting cannot occur. Those given the high honor of admission to the United States should support this country and love its people and its values.” He also charted a completely new path on the entire premise and goal of refugee policy: “The only long-term solution for these humanitarian disasters is to create the conditions where displaced persons can safely return home and begin the long process of rebuilding.”

Earlier today, I laid down the gauntlet for Trump to finally speak directly to the problems of Obamacare. I argued he needed to call for full repeal and hold Democrats accountable for creating this disaster but then blocking its solution. Trump did not disappoint in the macro-messaging. The guiding principles he laid out on health care were sound. He actually touched on the central point missed by GOP congressional leadership — that we should focus on lowering costs rather than expanding coverage as an end to itself, saying: “The way to make health insurance available to everyone is to lower the cost of health insurance, and that is what we will do.” Unfortunately, he contradicted that messaging by hinting at a pre-existing condition mandate and refundable tax credits — two elements of the establishment plan that will actually keep prices high. Nonetheless, the overall plan was as good as we can hope for from any Republican at this moment and needs to be bolstered by allies in the administration.

Although the details were a little sparse for a speech this long, he made it clear that the era of nation building is over. “My job is not to represent the world. My job is to represent the United States of America,” said Trump in a very effective punchline. At the same time, President Trump spoke to defending American security without apologizing and waging an unflinching war against radical Islamic terror. And thank God, as this is the first time in years a president has mentioned our alliance with Israel without pushing the odious “two state solution.”

Although crime is a policy mainly dealt with on a state level, I’m glad Trump used his “job” as ‘citizen in chief’ to address rising crime rates. This is one area of Trumpism that is actually more in line with traditional conservatism, even though it deviates from the current dogma among “right-leaning” policy elites. The same is true for the drug epidemic. He let the liberal open borders crowd own the disaster that is taking place in our communities thanks to drugs pouring over the border.

1. No mention of life and religious liberty:

While we’ve come to expect social conservatism to take a back seat, it’s a shame that these issues didn’t even receive the traditional obligatory mention, especially given the persecution that is taking place at the hands of the sexual identity lobby and the courts. He could have easily woven in respect for the conscience and private property decisions of others into this unifying speech and would have been a good ambassador for the cause. He won with overwhelming support from evangelicals and other faith-based groups in this country. It’s a shame they were left out tonight. Then again, the rest of the party is just as bad on this issue, so it’s not as if Trump is changing the party’s true position. Nonetheless, conservatives need to fight harder to address fundamental rights and judicial reform.

Let our policies stand on their own merits and the media’s desire to destroy them will be that much harder.

As always, there was no mention of balancing the budget, the threat of debt, or the need to cut spending. In addition, President Trump promoted “Ivankacare” and the full blown $1 trillion porkulous he calls an infrastructure rebuilding package. Conservatives should not back down in their opposition to these bad ideas. We don’t need another massive entitlement; we need to repeal Obamacare so that mothers don’t have to work more to pay for a second mortgage. Likewise, the talk of “crumbling infrastructure” is a dubious left-wing talking point. And to the extent there are problems with our infrastructure it’s because of the inefficient, failed federal monopoly on highway spending. Trump said, “the time has come for a new program of national rebuilding.” He is right, it’s time to devolve transportation and education spending to the states in order to improve those important functions.

Moreover, Trump must remember that we cannot have economic growth with such long-term debt. Also, the trade deficit he speaks of is only a problem because of our fiscal deficit and the misallocation of investments pouring into this country.

Nothing new here, but still very problematic. Much of the appeal of “buy America” and “stopping companies from going overseas” stems from the general feeling that we have lost our economy and sovereignty. But were Trump to really propose a solid agenda ending venture socialism — taxation, regulation, and subsidization — along with his virtuous immigration ideas, those problems would go away over time and trade won’t have to be the bogeyman. Furthermore, enactment of true free market policies is the best way to keep companies in America.

Overall, there was really nothing new regarding Trump’s non-conservative views, and I believe they were overshadowed by the solid parts of his speech on immigration and Obamacare. It’s something we must continue to work on as we fight to defend his good policies.

President Trump must now harness the energy from this successful speech and deliver specific policies to Congress on taxes, immigration, and health care. He must whip GOP leaders into shape, get everyone in his administration on the same page, stay on message, and let his policies speak above the rancor of the media. Trump should focus relentlessly on his policies (hopefully the more conservative ones) and back them up with a series of policy speeches while simply ignoring the media. Yes, the media is the enemy, but we must not be our own worst enemy. Let our policies stand on their own merits and the media’s desire to destroy them will be that much harder.