IF YOU MISSED IT, HERE IS THE BEST COMMENTARY SO FAR IN 2020

I’VE TOLD YOU SO, AND HERE IS MORE PROOF. Of course, Tucker Carlson says it better. – Jerry Broussard

In case you do not watch Tucker Carlson on FOX NEWS Cable, then you missed his report about this extraordinary horrid Bill by AOC and gang. Please watch and share.

On Tuesday night FOX News host Tucker Carlson reopened the case using information from a CHINESE study on the origin of the novel coronavirus.

The coronavirus came from either the Wuhan Center for Disease Control and Prevention or Wuhan Institute of Virology in Wuhan, China.

The study concluded the deadly virus came out of local laboratories in Hubei Province. The smoking gun in the study is the link to horseshoe bats which are not sold in local markets and not native to Wuhan. In fact the closest colony is 900 kilometers away. There is no evidence horseshoe bats were sold in the Wuhan wet markets. The local labs used this bat specimen and the virus came from a lab in Wuhan.

Reports linking bats to the coronavirus started making the rounds back in January.

But a recent paper published in the Wuhan Centre for Disease Control and Prevention found the source of the coronavirus is a laboratory near the Huanan Seafood Market in Wuhan.

Scientists from South China University of Technology in Guangzhou wrote and published a paper speculating that a centre for disease control near a Wuhan seafood market may be ground zero for the virus. Botao Xiao and Lei Xiao wrote that the Wuhan Centre for Disease Control and Prevention was the possible source because it “hosted animals in laboratories for research purposes”, including bats, and was “within 280 metres of the Huanan Seafood Market where a number of early infections were reported”.

In the paper, titled The possible origins of 2019-nCoV coronavirus, researchers explained that “41 people in Wuhan were found to have the acute respiratory syndrome and 27 of them had contact with Huanan Seafood Market”.

They wrote: “According to municipal reports and the testimonies of 31 residents and 28 visitors, the bat was never a food source in the city, and no bat was traded in the market.”

The research facility was also adjacent to the Union Hospital where the first group of doctors were infected.

This report was published in February.

Tucker Carlson reported on this tonight.

As the time until the next presidential election draws closer and the Democratic candidates start dwindling down, the question that sits in the back of everyone’s mind is, who will be the Democratic nominee?

Most people are thinking Joe Biden, Elizabeth Warren, or now at this point, it could even be Pete Buttigieg. But Tucker Carlson weighed in on the matter and said not to count this person out…and it’s someone who isn’t even in the race…yet.

That person is Michelle Obama.

According to the Washington Examiner,

“If you’re wondering who the Democratic nominee will be, don’t bet against Michelle Obama,” he said on Monday’s Tucker Carlson Tonight. “Last week, the former first lady issued a statement claiming she has no interest in being president, but there are signs that’s not true.”

Carlson then pointed to several examples that have made him suspicious about a potential Obama bid, including David Axlerod’s attacks on 2020 front-runner and former Vice President Joe Biden, former President Barack Obama’s refusal to endorse Biden in the race so far, and reports that the former president tried to convince his No. 2 not to enter.

Carlson continued, “If Obama had endorsed Biden, the race would be over … Obama hasn’t endorsed Joe Biden because he doesn’t want to. Why? Maybe he’s got other plans. Obama’s presidential memoir was also supposed to come out this year. Now, its release has been delayed until the middle of the Democratic primaries. In other words, at exactly the moment when Democrats will be thinking deeply about how to beat Trump, America will be talking about the Obamas. Coincidence? Maybe.”

“Maybe it’s also a coincidence that Michelle Obama just released yet another book last week, one that will require her, of course, to get on the road and talk to crowds … The Democratic Party is ripping itself apart over race, and gender, and class. Michelle Obama, let’s be honest, is one of the only people who could unite its warring factions.” 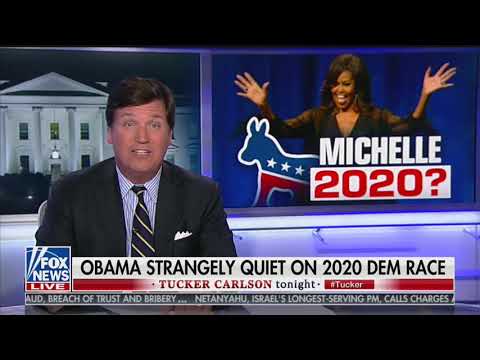 “I was one of the founders of – sort of – the first Green New Deal back in 2003, 2007,” Shellenberger, the founder of Environmental Progress, began. “People don’t remember President Obama – we spent about $150 billion on renewables between 2009 and 2015, and we just kept encountering the same kind of problems.”

“They just depend on when the sun is shining and when the wind is blowing, which is 10 to 40 percent of the year,” he said, demonstrating how the intermittent energy production of wind and solar makes them unreliable sources of power. “Something people are not as aware of, the low energy density of sunlight and wind. Basically what we’ve been finding is that the lower the energy density of the fuel … the bigger the environmental impact.”

Because solar and wind produce such small amounts of energy, according to Shellenberger, they require a much larger amount of land to generate electricity.

Instead, the Environmental Progress founder touted the benefits of nuclear energy — a source of power that can generate large amounts of reliable energy while emitting zero carbon emissions. However, Shellenberger said the public has yet to fully embrace nuclear energy because they associate it with nuclear bombs, past nuclear accidents and a desire to use energy that harmonizes with the natural world.

“That turns out to be a bad idea because the more natural resources we use, the worse it is for the natural environment,” he said.

As environmental activists become more alarmed about the threat of climate change, many are reevaluating how they perceive nuclear. The U.S. nuclear industry currently supplies about 20 percent of the country’s total electricity, but it provides roughly 60 percent of its zero-carbon electricity. A growing number of climate change-oriented lawmakers are now passing subsidies and support programs to keep nuclear plants in operation.

Content created by The Daily Caller News Foundation is available without charge to any eligible news publisher that can provide a large audience. For licensing opportunities of our original content, please contact licensing@dailycallernewsfoundation.org.

Founded by Tucker Carlson, a 25-year veteran of print and broadcast media, and Neil Patel, former chief policy adviser to Vice President Dick Cheney, The Daily Caller News Foundation is a 501(c)(3) non-profit providing original investigative reporting from a team of professional reporters that operates for the public benefit.

As both parties scrutinize the vote count in Florida’s Broward County, with the state’s gubernatorial and senatorial races closing in on a tie, Sen. Marco Rubio said the county’s elections office has a history of malfeasance.

“This is at a minimum a pattern of incompetence. Voters deserve better,” the Florida Republican said Thursday on “Tucker Carlson Tonight.”

“This is not even a partisan thing. This is a county that apparently cannot even count votes as well as a county that just got wiped out by a hurricane.”

The state’s Republican Gov. Rick Scott filed a lawsuit Thursday against Broward election supervisor Brenda Snipes for allegedly refusing to tell them about votes she has not yet counted. The vote totals Snipes tabulated two days after the election would have readers believe that more people cast votes for agricultural commissioner than for U.S. Senator.

Additionally, lawyer Marc Elias of Perkins Coie — who hired Fusion GPS for the Democratic National Committee to investigate Donald Trump during the 2016 presidential election — has been hired to litigate a recount on behalf of Democrats.

The Republican National Committee also pointed out 12 times news stories using its own headlines where Snipes has “been outright incompetent and possibly criminal”:

3 — Fellow Democrats accused her precinct of individual and systemic breakdowns that made it difficult for voters to cast regular ballots (Miami Herald, November 4, 2014)

6 — Claiming to not have the money to notify voters when their absentee ballot expired (Sun Sentinel, November 8, 2018)

11 — Slow results and piles of ballots that cropped up way after Election Day (The Capitolist, November 8, 2018)