Source: AP Photo/Chris Pizzello
The only people surprised that the special counsel’s investigation of Russian collusion did not confirm a lunatic conspiracy theory are consumers of the modern American media. For two years, our constitutionally protected guardians of the truth put out a stream of misinformation, promising viewers that Robert Mueller was going to reverse the outcome of the 2016 election.

Everyone at fake news MSNBC, marginally less fake news NBC, and totally fake news CNN — hosts, guests, legal experts and national security analysts — should be told, Clean out your lockers. Put all your things in cardboard cartons. If you need to go back, you will be escorted by security.

Instead, they are adamantly refusing to take back their years of lies about Trump and Russian collusion. This is not a time to let bygones by bygones. The boot should not be lifted from the media’s throat.

In case you’ve forgotten what needs to be taken back, here is a random selection, from a single network for simplicity:

“Well, this demonstrates that Robert Mueller is focusing on exactly what he is supposed to be focusing on, and that is Russia … We already have clear evidence of collaboration between the Trump campaign and Russian agents.”

“We have the most immoral president perhaps in American history particularly because of the foreign influence of Russia … it is hard to believe that a prosecutor of Mueller’s testing and experience would come to the end of this and not have something to say about these terrible offenses.”

“I’ll tell you something, if (Russia’s ‘inside man’ is) not George Papadopoulos, then we’ve got a mystery person inside the Trump campaign who theoretically could still be in place.”

“I believe that what we have here is a very broad-based criminal conspiracy. … And Donald Trump is a walking example of how any intelligence officer can turn someone against their own nation. As John Brennan said, most of the time, they don’t even know that they’re committing treason.”

“This is the linkage between Donald Trump and Russia in crimes.”

“Were these gun rights folks potentially a conduit for Russian money alongside other forms of Russian government influence on our 2016 campaign?”

“And what about Trump’s ring leadership of his people, including family members and their efforts to win this award of a foreign power, Russia, to win the presidency?”

“And the Russians’ investment in (Trump) goes back decades. … It may have been the situation where (Trump) decided, look, what Russia is giving us in terms of political help here and undermining Hillary Clinton’s candidacy may be way bigger than any deal we could ever get in Russia.”

“So, with this whole real estate deal and the claws that the Russians had into (Cohen), and what he was doing with that in terms of dealing with the Russians was all part and parcel of this conspiracy that resulted in their assistance in the campaign.”

“An American president who has been compromised by the Russians faces the world.”

According to the Mueller report, the investigation was a big nothing burger but a very expensive one. Some figure it cost taxpayers around 30 Million dollars. 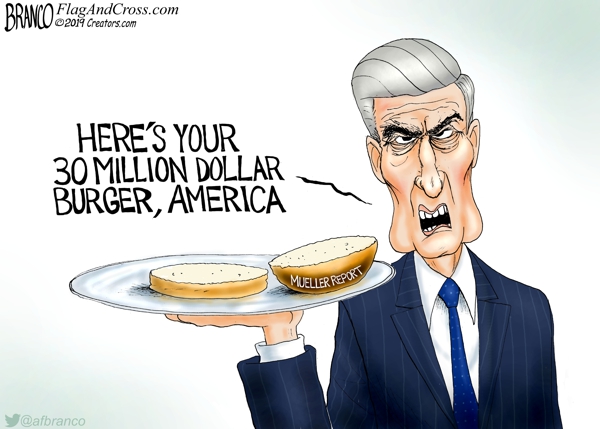 It’s evident that the main reason for the Mueller investigation is the guard the D.C. Swamp from outsiders like President Trump.

Many NFL Fans watch football to escape politics and the daily grind, but now days it’s right in your face, thanks to some.

Mueller Investigating Trump with no evidence of a crime, while Hillary, with a mountain of evidence is totally ignored.