Rep John Ratcliffe went into attack mode today as the House Intelligence Committee, headed by a man with no intelligence but loaded for bear with lies, were to holds hearings on the next round of hoaxes Democrats hope will bring the president down.

He took apart the whistleblower, the committee and the Democrats in general. While RINOs who are NeverTrumpers like Mitt Romney and Ben Sasse attacked the president, it’s nice to know some Republicans fight for the American people.

Rep. Ratcliffe pointed out numerous errors, conjecture and lies in the whistleblower report on President Trump’s July conversation with President Zelensky from Ukraine.

Rep. Ratcliffe:  Chairman Schiff wrote a letter on September 13th accusing you of being part of an “unlawful coverup” and then the Speaker of the House took it one step further. She went on national TV and said not once but twice that you broke the law… You were publicly accused of committing a crime and you were also falsely accused of committing a crime. You were required as you noted to follow the opinion of the Justice Department, 11 page report, on whether or not you were required to report the whistleblower complaint. Correct?… So you were publicly accused and you were wrongly accused and yet here today I have not heard an apology. Welcome to the House of Representatives with Democrats in charge… The whistleblower is in fact wrong in numerous respect… The Democrats are intent on impeaching President Trump for lawful conduct… The whistleblower then goes on to say, ‘I was not a direct witness to the events described’ … In other words, all of this is secondhand information. None of it is firsthand information. The sources the whistleblower bases his complaints on include the Washington Post, The New York Times, Politico, The Hill, Bloomberg, ABC News and others. In other words, much like the Steel Dossier the allegations in whistleblower’s complaints are based on third-hand mainstream media sources, rather than first hand information

Rep. Ratcliffe DESTROYED the liberal hack and whistleblower.
It was an incredible drubbing of this latest Democrat clown show. 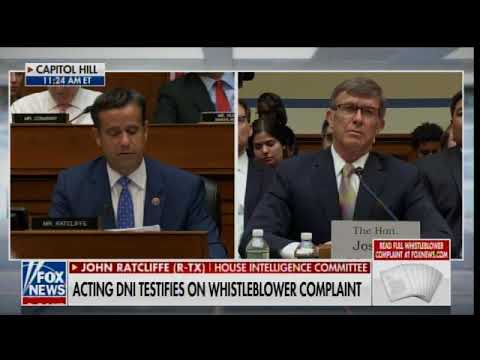 Those of you who have not been asleep for the past six years are painfully familiar with the never ending stream of lies that emanate from this president. It would take an entire column to even begin to scratch the surface, but I will mention a few to jog your memories:

“You can keep your current health insurance plan”

Benghazi violence was caused by an internet video & demonstrations – maintained despite the fact that the White House knew, and had been warned, that it was a terrorist attack, and in fact had a live TV feed from a drone during the attack.

I could go on forever, but you get the point. More recently he has been endangering the security of our nation with his lies. A current one is that ISIS/ISIL/IS/Khorosan Group or whatever Obama is calling them this week is a “JV” group that poses no threat to the Middle East, let alone America.

He famously told us in his second year of office that a fence on our Southern boarder was “nearly complete”. His own Department of Homeland Security, however, said it was only 5% completed. Recently we have seen illegals pouring into the country, and instead of turning them back, he is actually resettling them all over the country, making them somehow the financial responsibility of the US.

Reports from some of these sites confirm that these illegal aliens are bringing disease and pestilence with them. Naturally, as a human being, one has sympathy for these people and for the suffering peoples of nations all over the world, but where does it say that they have a “right” to come to this country and live off the few people who are still working?

Now, however, the illnesses and crime that are coming in with the illegals pales when compared with that of the ebola virus. Just weeks ago, Obama visited the CDC and assured us that the chance of ebola coming to this country was remote at best. He assured us that all precautions were being taken to ensure that the virus was contained in Africa, and that we would send a team of soldiers (?) over there to eradicate it. I guess they were going to shoot those pesky viruses. Well Pinocchio, ebola is here.

But what about all the measures we were taking? Turns out that the “measures” was a questionnaire at the airport. What happened was that a man who was completely knowledgeable of the fact that he had the disease, since everyone he lived with was sick or had died from it, decided to be less than candid on his questionnaire. He then took a plane, exposed the passengers, exposed people where he laid over in Brussels and at Dulles here in D.C., and then in Dallas.

He went to the hospital in Dallas, told them he was from Nigeria, told them he had been exposed to ebola, and that he had ebola-like symptoms, and they concluded that he had a simple case of the flu. They sent him home to infect his girlfriend and four children, who in turn very likely passed it on to their contacts.

He had such a fever that he literally soaked the bed, and such vomiting and bleeding that he couldn’t walk, necessitating calling 911 and exposing those people as well.

This man was the opposite of a hero. He knew he was sick, he knew that the virus had a huge mortality rate, and decided in an attempt to save himself that he would risk and probably kill untold numbers of people, perhaps beginning an epidemic or pandemic himself. He is laughingly being sought by the Liberian government for lying on his questionnaire, and will face prosecution if he lives that long.

Still, one can understand that a person who knows he will die if he doesn’t receive treatment (albeit there is none of the experimental drug remaining) can become desperate and do morally reprehensible things. What we cannot understand is how President Obama, ostensibly charged with the protection of the people of the United States, does nothing to stop the spread of this disease.

In an interview this morning on FOX News (which you can read here), Obama lackey CDC Director Tom Frieden told Brian Kilmeade, “I wish we could get to zero risk by sealing off the border. But we can’t.

The only way we are going to get to zero risk in this country is by controlling it in Africa. Until that happens, Americans may come back with Ebola. Other people who have a right to return or a visa to enter may come back. People will go to third countries and come from there. Sealing them off – first off won’t work.

Second off, it will backfire. Because if we can’t get help in there, then we’re not going to be able to stop the outbreak and ultimately we will end up at higher risk, not lower risk.”

I have heard some dumb statements from this administration, but this one has to top the list, and have the potential for killing the most people. Any soldier knows that in the case of a biological attack you identify the soldiers by their symptoms and then you isolate them.

This is a basic tenet of public health. In this case, the West African nations know that quarantine (isolation) is necessary to prevent the spread of disease and untold sickness and death, and are doing it themselves.

For us, the first thing we should have done, and should belatedly do, is to close the borders. Nobody  to or from West Africa. Would that absolutely prevent ebola from arriving here? Probably not, but it would sure go a long way. Frieden, however, is saying, “It won’t absolutely stop it, so we are not going to even try.”

Huh? That reminds me of abstinence education used to reduce the number of unwanted pregnancies and thus abortions. Abstinence works 100% of the time, whereas other methods of birth control for multiple reasons do not. Some 56 million aborted babies would attest to that if they could. But abstinence education is not a part of the administration’s plan for this problem, because controlling people’s sexual drives is not part of the liberal agenda. It is, in fact, anathema to it. So they don’t try it.

Obama will not stop flights to and from West Africa, and will not close the borders, because like abstinence education, it is not part of the liberal agenda. Open borders and free influx of anyone who decides they want to come to America is a keynote of the Obama presidency, from which he has backed off only slightly recently, temporarily pocketing his pen and phone until after the November elections.

Any idea the public might get that something could be accomplished by closing the borders would jeopardize his amnesty plans, and that cannot be allowed to happen. So, as with the problem with illegal immigration, he will not try closing the borders.

Their response to anything depends entirely on how that response fits into their agenda and how they think it will affect the welfare of the democrat party. For this administration, open borders for more democrat voters trumps public health and possible the worst pandemic in history.