Rosenstein’s Monster, the Mueller investigation, continues to haunt America with no end and no evidence the Trump campaign colluded with Russia to win the presidential election.

The scariest scenario going this Halloween season among many Democrats is the possibility of Hillary running for president in 2020. 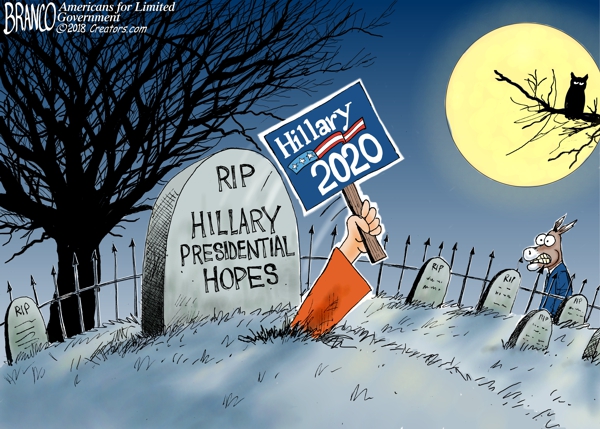 Funny, just when more about Hillary Russia collusion, Trump dossier, and calls for Mueller resignation we get a Manafort Indictment.

Finally, Hillary Clinton has beat Donald Trump at something. By popular vote, this prestigious costume award.

Remember the good old days when people just put razor blades in Halloween candy – at least according to the urban legend? Or how about the harmless religious evangelicals that produced Hell-themed Halloween shows? At least that faith-based fad put some effort into relating Halloween with their message. Evidentially, Muslims just want to destroy everything that isn’t them, according to what’s going on in Milford, Connecticut.   As previously reported, the Milford public schools officially cancelled all Halloween events to avoid “excluding people due to religion, cultural beliefs etc.” Apparently, the school leaders decided it was just easier to exclude everybody. In fact, Milford isn’t even the first Connecticut County to try this. Newington schools banned Halloween costumes by actually using “exclude everybody” as a justification.

We can thank Islam and its banning children from wearing costumes as the reason for this nonsense. I guess it’s not enough for Islamic law to include murdering anyone who isn’t Muslim, or enjoy the benefit of a President who literally ignores reality in order to defend Islam. Muslim’s gotta crush the fun stuff too. Remember how some Christians reject Halloween and everybody else just laughs at their beliefs and go trick-o-treating anyway? Funny how school leaders don’t worry much about exclusion then.

The good news is Milford parents were not taking this sitting down, according to “I don’t think we’re excluding anybody” stated Victoria Johannsen to local reporters. “I think they’re excluding themselves.” True that. The good news is after getting the spit kicked out of them in the backlash, the school system reversed their decision to resume Halloween festivities.

Obviously, it just proves that even Islam shouldn’t mess with suburban Soccer Moms. Muslim student pitches a fit over these awesome Halloween costumes

A controversy has broken out at Washington University in St. Louis over a Facebook photo apparently showing five students dressed up for Halloween as a Navy SEAL team capturing Osama bin Laden with garish neon water guns.

The photo was originally posted on Facebook on Oct. 30 with the title “Halloween ’13 Amurrica!!” reports the St. Louis Post-Dispatch. The photo shows three dudes in camouflage attire surrounding a kid also in camo garb who is sporting a long, fake beard and turban. There’s also a guy in the background holding up an American flag.

“As a Muslim-American who has been subjected to taunts of ‘dirty paki’ and ‘get the fuck out of WU and America’ on this campus, the reasons why this photo are offensive are painfully obvious and represent a broader, more aggressive (and apparently violent) Islamophobia rampant here at WashU and in the United States,” Jahangiri has explained on her Facebook page.

“This photo makes a costume of the lives of the thousands of civilian Muslim men who have been murdered during our ‘War on Terror’ and the countless others who have been mutilated, robbed, and stabbed to death in hate crimes across the United States,” she also rants.

“This is disgusting and cannot be tolerated on this campus. There are very few Muslim students on this campus, and our voice is not loud enough. For those of you who had not heard of this until now, now you have. What are we going to do to change this?”

School officials at Wash. U. have sided earnestly with Jahangiri.

No fewer than three high-ranking functionaries at the school including the chancellor, Mark S. Wrighton, signed a statement saying they are “disappointed and saddened” about the awesome Halloween stunt, notes the Post-Dispatch. The statement called the image “entirely inconsistent with who we are as an institution, our values and the way in which we engage in the world around us.”

Now the article gets really NSFW