In all the excitement among objective journalists for Joe Biden’s declared victory, reporters are missing how extraordinary the Democrat’s performance was in the 2020 election. It’s not just that the former vice president is on track to become the oldest president in American history, it’s what he managed to accomplish at the polls this year.

Candidate Joe Biden was so effective at animating voters in 2020 that he received a record number of votes, more than 15 million more than Barack Obama received in his re-election of 2012. Amazingly, he managed to secure victory while also losing in almost every bellwether county across the country. No presidential candidate has been capable of such electoral jujitsu until now.

While Biden underperformed Hillary Clinton’s 2016 totals in every urban county in the United States, he outperformed her in the metropolitan areas of Georgia, Michigan, Wisconsin, and Pennsylvania. Even more surprising, the former VP put up a record haul of votes, despite Democrats’ general failures in local House and state legislative seats across the nation.

He accomplished all this after receiving a record low share of the primary vote compared to his Republican opponent heading into the general election. Clearly, these are tremendous and unexpected achievements that would normally receive sophisticated analysis from the journalist class but have somehow gone mostly unmentioned during the celebrations at news studios in New York City and Washington, D.C.

The massive national political realignment now taking place may be one source of these surprising upsets. Yet still, to have pulled so many rabbits out of his hat like this, nobody can deny that Biden is a first-rate campaigner and politician, the likes of which America has never before seen. Let’s break down just how unique his political voodoo has been in 2020.

Holy moly! A lot of Americans turned out for a Washington politician who’s been in office for nearly 50 years. Consider this: no incumbent president in nearly a century and a half has gained votes in a re-election campaign and still lost.

President Trump gained more than ten million votes since his 2016 victory, but Biden’s appeal was so substantial that it overcame President Trump’s record support among minority voters. Biden also shattered Barack Obama’s own popular vote totals, really calling into question whether it was not perhaps Biden who pulled Obama across the finish lines in 2008 and 2012.

Proving how sharp his political instincts are, the former VP managed to gather a record number of votes while consistently trailing President Trump in measures of voter enthusiasm. Biden was so savvy that he motivated voters unenthusiastic about his campaign to vote for him in record numbers.

2. Winning Despite Losing Most Bellwether Counties

Biden is set to become the first president in 60 years to lose the states of Ohio and Florida on his way to election. For a century, these states have consistently predicted the national outcome, and they have been considered roughly representative of the American melting pot as a whole. Despite national polling giving Biden a lead in both states, he lost Ohio by eight points and Florida by more than three.

For Biden to lose these key bellwethers by notable margins and still win the national election is newsworthy. Not since the Mafia allegedly aided John F. Kennedy in winning Illinois over Richard Nixon in 1960 has an American president pulled off this neat trick.

Even more unbelievably, Biden is on his way to winning the White House after having lost almost every historic bellwether county across the country. The Wall Street Journal and The Epoch Times independently analyzed the results of 19 counties around the United States that have nearly perfect presidential voting records over the last 40 years. President Trump won every single bellwether county, except Clallam County in Washington.

Whereas the former VP picked up Clallam by about three points, President Trump’s margin of victory in the other 18 counties averaged over 16 points. In a larger list of 58 bellwether counties that have correctly picked the president since 2000, Trump won 51 of them by an average of 15 points, while the other seven went to Biden by around four points. Bellwether counties overwhelmingly chose President Trump, but Biden found a path to victory anyway.

3. Biden Trailed Clinton Except in a Select Few Cities

Patrick Basham, a pollster with an accurate track record and the director of the Democracy Institute in D.C., highlighted two observations made by fellow colleagues, polling guru Richard Baris of Big Data Poll and Washington Post election analyst Robert Barnes. Baris noted a statistical oddity from 2020’s election returns: “Biden underperformed Hillary Clinton in every major metro area around the country, save for Milwaukee, Detroit, Atlanta and Philadelphia.”

Barnes added that in those “big cities in swing states run by Democrats…the vote even exceeded the number of registered voters.” In the states that mattered most, so many mail-in ballots poured in for Biden from the cities that he put up record-breaking numbers and overturned state totals that looked like comfortable leads for President Trump.

If Democrats succeed in eliminating the Electoral College, Biden’s magic formula for churning out overwhelming vote totals in a handful of cities should make the Democrats unbeatable.

Randy DeSoto noted in The Western Journal that “Donald Trump was pretty much the only incumbent president in U.S. history to lose his re-election while his own party gained seats in the House of Representatives.” Now that’s a Biden miracle!

In 2020, The Cook Political Report and The New York Times rated 27 House seats as toss-ups going into Election Day. Right now, Republicans appear to have won all 27. Democrats failed to flip a single state house chamber, while Republicans flipped both the House and Senate in New Hampshire and expanded their dominance of state legislatures across the country.

Christina Polizzi, a spokesperson for the Democratic Legislative Campaign Committee, went so far as to state: “It’s clear that Trump isn’t an anchor for the Republican legislative candidates. He’s a buoy.” Amazingly, Biden beat the guy who lifted all other Republicans to victory. Now that’s historic!

In the past, primary vote totals have been remarkably accurate in predicting general election winners. Political analyst David Chapman highlighted three historical facts before the election.

Third, Trump set a record for most primary votes received by an incumbent when more than 18 million people turned out for him in 2020 (the previous record, held by Bill Clinton, was half that number). For Biden to prevail in the general election, despite Trump’s historic support in the primaries, turns a century’s worth of prior election data on its head.

Joe Biden achieved the impossible. It’s interesting that many more journalists aren’t pointing that out.

The 2018 election did not reveal the long-anticipated “Blue Wave” but it did reveal a Blues Wave by “Cyin’ Chuck Schumer in the Senate. 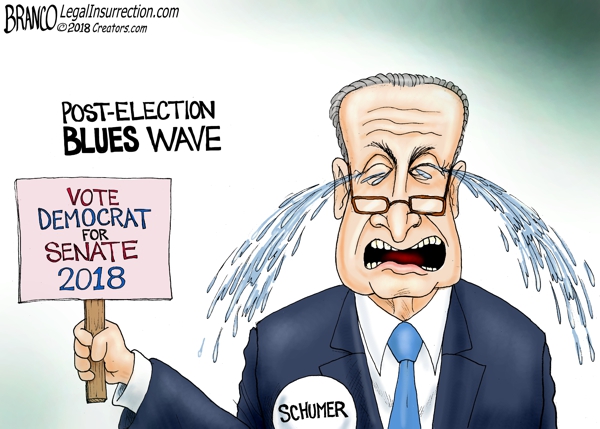 Republicans added reliable conservatives in the U.S. Senate and picked up several Freedom Caucus members in the House according to a post-election analysis by a conservative activist.

Ken Cuccinelli, the former Virginia attorney general, shared his views Wednesday morning with the “Sandy Rios in the Morning” show on American Family Radio, where he said conservatives should be pleased with the midterm results because conservative views will be well-represented when those winners take office next year.

One example he gave is the Tennessee race for U.S. Senate, where Rep. Marsha Blackburn defeated Phil Bredesen to keep that seat in GOP control. But her win also moves the seat more to the right, he said, because she replaces Bob Corker.

Blackburn is likely the most conservative female lawmaker to ever be elected to the U.S. Senate, he told the program.

Cuccinelli oversees the Senate Conservatives Fund, a PAC that supports tea party conservatives, and he is openly no fan of the GOP-led Senate under Majority Leader Mitch McConnell. In fact, Cuccinelli told Rios it’s likely that McConnell will fail to push back against the Democrat-led House next year.

“Mitch McConnell is a natural surrenderer,” he complained, “and we will see that reassert itself as the Democrats come into the House.”

If McConnell proves Cuccinelli and other critics wrong, he added, it would represent a “monumental shift” among unreliable GOP leaders John Cornyn, John Thune, and Roy Blunt in the Senate.

That is why fresh Senate faces, such as Missouri’s Josh Hawley and Indiana’s Mike Braun, are important for conservatives who want the Senate to fight, he said.

Asked by Rios about the U.S. House, which flipped to Democrat control on election night, Cuccinelli said the House Freedom Caucus picked up enough freshman members on Election Day to increase its influence to approximately one-fifth of Republicans. That influence will prove important, he said, when the push comes for Rep. Jim Jordan to be Minority Leader.

“They did nothing in the House except for the tax bill,” he said of Rep. Paul Ryan, the outgoing Speaker of the House, and his lieutenants.

See latest updates below from Fox News and The Associated Press

All times are Central time

Democrat Bennie Thompson of Mississippi cruised to his 13th full term in the U.S. House of Representatives.

Republican John Barrasso of Wyoming and Democrat Kirsten Gillibrand of New York re-elected to the Senate.

Re-elected: Democratic Sens. Warren of Mass., Murphy of Conn., Cardin of Md., Carper of Del., and Whitehouse of R.I.

Vermont’s Bernie Sanders has cruised to re-election for his third term in the Senate, easily outpacing eight candidates. Sanders, the independent who has long been one of the state’s most popular politicians, spent little time campaigning ahead of Tuesday’s election.