The Centers for Disease Control’s Lies Have Destroyed Its Legitimacy

On August 6, 2021, the Centers for Disease Control released a report that the agency claimed showed “Vaccination Offers Higher Protection than Previous COVID-19 Infection.” This assertion came amidst a public battle with Sen. Rand Paul, as the CDC released this data from Kentucky, Paul’s home state.

Yet after indisputable scientific evidence continued to pile up in favor of natural immunity, the CDC finally capitulated on January 19, 2022, recognizing the superiority of natural immunity over vaccination alone: “Between May and November 2021, people who were unvaccinated and did not have a prior COVID-19 infection remained at the highest risk of infection and hospitalization, while those who were previously infected, both with, or without prior vaccination, had the greatest protection.”

The CDC’s reversal came after its previous discounting of natural immunity caused mass layoffs, nursing home resident isolation, and hospital staffing shortages. It must not be forgotten or overlooked, and the CDC must be held accountable.

Who is harmed the most by health misinformation produced by our president and his agencies? Those with low health literacy. Our rich-poor gap is growing in this country and lying about health issues only exacerbates it.

A deeper dive into the August natural immunity study reveals methodology that can be recognized as illogical, even to those without medical experience. The CDC researchers created two groups. The case group included people who tested positive in 2020 and then tested positive again during a two-month window in 2021. The control group included people who had a positive test in 2020 without another positive test during this artificial two-month window.

The study observed that non-vaccinated group registered a positive test 34.4 percent of the time, compared to 20.3 percent of fully vaccinated individuals. The CDC falsely defined the case group’s second positive test as a “reinfection.” This is the central lie of the study. This data conveniently omitted data on people actually becoming symptomatic or what a common person would call “reinfected.”

To illustrate this point, consider if a Covid-recovered person comes into contact with Sars-Cov-2 in their community. They might test positive on a PCR test. Their body can remember the virus, fight it off, and the person never becomes ill. However, shortly after the exposure, a PCR swab can detect bits of genetic material (even if it’s unviable virus). Therefore, this study could be more of a reflection of people’s likelihood of re-exposure to Sars-Cov-2, not reinfection, as the CDC claimed.

By conflating exposure and reinfection, the CDC misled the public. CDC Director Rochelle Walensky stated, “This study shows you were twice as likely to get infected again if you are unvaccinated. Getting the vaccine is the best way to protect yourself and others around you, especially as the more contagious Delta variant spreads around the country.”

This guidance came when mounting evidence indicated Covid vaccines quickly lose their effectiveness against infection and transmission, which the CDC loathed to admit. Unfortunately, Walensky’s guidance undermined the credibility of the CDC for generations to come.

As a physician, it’s frightening that a public health official made a policy recommendation based on such a flawed study. We should encourage critical thinking and scientific skepticism, but such a blatantly flawed study design should not be tolerated in our leading health institutions.

Not an Isolated Incident for the CDC

This isn’t the only time the CDC has been caught misleading the public. Drawing ire from the medical community, the was an uncontrolled study of students in Arizona that Walensky referred to in discussing the CDC’s mask guidance for schools. This study defined a “covid outbreak” as “two or more” positive lab tests among students or staff. So, if your school had two asymptomatic third graders, you’ve got a “covid outbreak” on your hands. Even worse, the study weighted such an “outbreak” equally to a school with dozens of symptomatic teachers or students. According to the CDC, two equals 50—at least for “covid outbreaks.”

In a Georgia study that actually had a sufficient control arm, the CDC minimized the fact that there was no statistically significant difference between masked and unmasked student groups. They’ve also minimized the importance of diet and exercise during the pandemic. They failed to effectively communicate evidence-based, life-saving outpatient treatment protocols. The list goes on.

Why This Matters So Much

How does minimizing natural immunity cause harm in the real world? There are at least three deadly repercussions.

First, many hospitals following the CDC’s guidance mandated that only vaccinated health-care workers be allowed to work at their facilities. This means naturally immune health-care workers were wrongly excluded from the workforce. Based on a toxic lie fabricated by the CDC, hospitals continue to experience staffing shortages, contributing to the hospitalization overcapacity narrative they’ve used to demonize the unvaccinated.

Second, the same problem arose for nursing homes, where seniors were denied visitation rights from unvaccinated, naturally immune family and friends, even though less protected vaccinated people were allowed in. Lack of care workers also prevents patients from being discharged from hospitals to care facilities.

Third, the natural immunity lie also stripped countless Americans of their health coverage and livelihoods. During the delta wave, for example, a worker at Los Alamos National Laboratories was fired from his job for religiously objecting to vaccination, despite working entirely from home and having recovered from a previous Covid infection. The CDC now admits this worker’s immunity provides protection superior to that of his co-workers who had merely vaccine-induced immunity at that time. He lost his job while the less protected did not. By denying natural immunity’s superiority to vaccine-induced immunity, how many others have been fired and lost health-care access the moment we need our population to be at its healthiest?

Punishing People We Should Have Praised

Naturally immune people should have been identified early in the pandemic as the most protected, ushered into hospitals and nursing homes to serve our vulnerable, and certainly should have been allowed to keep their jobs. By refusing to acknowledge the harms of lockdowns, mask mandates, and vaccination, the CDC has brought everlasting shame to itself. There is clear evidence these types of interventions carry measurable risk. A better approach would have been to honestly discuss the risks and benefits with the public, much like I discuss surgical risks and benefits with my patients. This is the very tenet of informed consent, and better communication always results in a better relationship.

Americans need an unbiased, incorruptible, and credible CDC that provides reliable and scientifically sound public health guidance. These lies have de-legitimized and undermined public confidence in the institution of the CDC itself.

The consequences of lying about Covid-19 will spill into other areas of health care. Millions of Americans have lost trust in our hospitals and institutions and are now resorting to “under the table” health care. In health care, loss of trust equals lack of access. The CDC must return to the basics of evidence-based medicine to overcome its crisis of legitimacy. 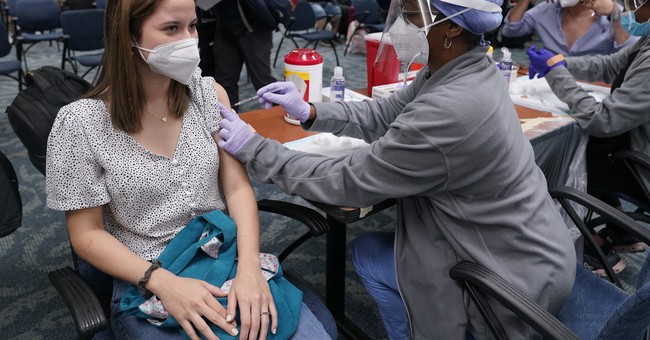 If I weren’t already staunchly pro-vaccination, the vaccine zealots would turn me against the COVID shot. The proof that they’re practicing religion and not science is their refusal to acknowledge the great heaping hunks of immunity a person gets from natural infection.

Obviously, you don’t want to contract COVID just to get all that boffo immunity, but lots of people have already been infected, so why can’t we count them the same as vaccinated?

The current research — and that’s all we have for the vaccines, too — indicates that natural immunity is not as good as vaccine immunity — it’s better! Study after study keeps finding that the previously infected have stronger, broader and longer-lasting immunity than people who’ve received the vaccine.

When the vaccinated, with their pipsqueak immunity, stop browbeating the already-infected, I’ll believe this is something other than a cult.

Nope. Your prior infection is no good here! We are accepting ONLY vaccination cards.

Whatever that impulse is based on, it’s not “science.”

Then in June, the Cleveland Clinic produced a gigantic, perfectly controlled study finding that people who’d already had COVID received no benefit from vaccination.

The clinic had tested its 52,238 employees throughout 2020. At one point or another, 2,579 tested positive. By mid-December, 46% of the recovered COVID patients had taken the vaccine, but more than half (54%) had not.

The authors concluded: “Our study … provid[es] direct evidence that vaccination does not add protection to those who were previously infected.”

NO! This was terrible news for the vaccination Karens! Their position is: Everyone must get the vaccine. Even if you live alone on a mountaintop and eat leaves and beetles to survive, even if you’re a burbling infant, even if you’ve had COVID, YOU MUST GET THE VACCINATION!

In short order, the Cleveland Clinic was bullied into submission. The authors of the report issued what sounded like a retraction, but, on closer examination, was just a lot of airy nonsense.

E.g.: “This is still a new virus and more research is needed. …”

Duh. Same for the studies showing how fantastic the COVID vaccines are.

“It is important to keep in mind that this study was conducted in a population that was younger and healthier than the general population. …”

This study SUCKS. It only applies to the entire working-age population of the U.S.!

“In addition, we do not know how long the immune system will protect itself against re-infection after COVID-19. …”

Ditto for the vaccine.

Presumably, it’s also “safe” to use Gwyneth Paltrow’s healing crystals if you have previously tested positive. The question is: Do you need to?

” … and we recommend all those who are eligible receive it.”

Just this week, a study out of the Emory University Vaccine Center, led by “world renowned immunologist” (as he is known) Rafi Ahmed, found “durable and broad immune memory after SARS-CoV-2 infection.” And get this: The researchers also found that a natural COVID infection protects against a range of other coronaviruses, too.

What’s so impressive about these studies is that they are going against the woke mob. After a year of seeing scientists and scientific journals irredeemably corrupted, any study that won’t be cited in Teen Vogue carries extra credibility. Worse, the results support Sen. Rand Paul! Nobody’s going to lie about that.

This isn’t just a matter of policy not catching up to the science. The vaccine Karens positively disdain the previously infected. Instead of being treated like the superhumans that they are, recovered COVID patients are scorned, treated like smokers or AIDS victims. (No, sorry — the latter were revered as “angels.”) We’re simultaneously told that COVID is WILDLY contagious and … it’s your own damn fault for not wearing a mask, socially distancing or getting a vaccine.

This abject refusal to acknowledge the existence of natural immunity proves that the vaccine Karens don’t care about the health of their fellow human beings. They just want to boss us around.