A GREAT “FEEL GOOD” REPORT: ‘If We Can’t Work, He Can’t Work!’: Fed Up Restaurant Owner Stands Up to California Health Gestapo A California restaurant owner blocked in a public health bureaucrat with his truck earlier today after the government thug gave him a citation for operating his business against Gov. Gavin Newsom’s unconstitutional edicts.

The owner of the Breda & Barley restaurant in Covina, a suburb of Los Angeles, used his truck to block in a public health official who fined him for serving customers in an outdoor setting. A viral video shows the restaurant owner telling a police officer about the situation.

The video can be seen here:

Big League Politics has reported on the tyranny in California where left-wing bureaucrats have exploited media-generated pandemic hysteria to enact totalitarian social controls, prompting a backlash from constitutional sheriffs:

People are getting fed up with surrendering to fear. Patriots are beginning to stand up to left-wing COVID tyranny.

WATCH: California health secretary admits that outdoor dining closures were to keep people home, and not because restaurants were spreading COVID

As the big tech tyrants tighten their grip, join us for more free speech at Parler—the anti-censorship social media platform.

California Health Secretary Dr. Mark Ghaly said in a video announcement on Wednesday that the lockdown rules in the state preventing outdoor dining are not a tool for safety, but rather a tactic to “keep people at home.”

“Turning to restaurants to deliver and provide takeout options instead really has to do with the goal of trying to keep people at home,” Ghaly said. “Not a comment on the relative safety of outdoor dining.”

Ghaly commented on the extensive steps which restaurants have taken with the government to make outdoor dining as safe as possible including “keeping tables farther apart, to ensuring masking happens as much as possible, to create opportunities for air circulation.” He pointed out “all of those factors make outdoor dining lower risk.”

“But right now,” Ghaly continued, “we advise against anything that you can do in another way, in a lower risk way, that avoids you either leaving your home, or only leaving your home in a way that doesn’t expose you and cause you to mix with others.”

California’s lockdown rules have come under extensive criticism by conservatives who have suggested that the restrictions put in place are arbitrary and draconian, while Democrats have mostly, although in Ghaly’s case not always, argued that they are necessary steps to prevent the spread of coronavirus.

Conservatives have also pointed the fact that some state officials and healthcare profession leaders, who have strongly supported lockdown measures, have flaunted the rules themselves. California Governor Gavin Newsom was photographed in November dining at a lavish restaurant in Napa, California with a small group of people even at a time when his own orders restricted such gatherings.

Orange County Sheriff Don Barnes announced Saturday that his agency would not enforce the new coronavirus-related lockdown enacted in California.

According to the Associated Press, Gov. Gavin Newsom (D) announced a plan last week for the most restrictive lockdown since the beginning of the pandemic if the state’s COVID-19 metrics met certain thresholds, which has now happened.

The vast region of Southern California, much of the San Francisco Bay area and a large swath of the Central Valley are about to be placed under a sweeping new lockdown in an urgent attempt to slow the rapid rise of coronavirus cases.

The California Department of Public Health said Saturday the intensive care unit capacity in Southern California and Central Valley hospitals had fallen below a 15% threshold that triggers the new measures, which include strict closures for businesses and a ban on gathering with anyone outside of your own household. The new measures will take effect Sunday evening and remain in place for at least three weeks, meaning the lockdown will cover the Christmas holiday.

What did the sheriff say?

Barnes did not mince words: He said that compliance with the new order is a matter of “personal responsibility,” so his agency would not be enforcing the “ever-changing” nature of Democrat-imposed restrictions.

“The Orange County Sheriff’s Department will remain consistent in our approach,” Barnes explained. “Orange County Sheriff’s deputies will not be dispatched to, or respond to, calls for service to enforce compliance with face coverings, social gatherings, or stay-at-home orders only. Deputies will respond to calls for potential criminal behavior and for the protection of life and property. Our actions remain consistent with the protections of constitutional rights.”

The sheriff also criticized the restrictions because they hurt Americans who are “already struggling through difficult circumstances.”

“To put the onus on law enforcement to enforce these orders against law abiding citizens who are already struggling through difficult circumstances, while at the same time criticizing law enforcement and taking away tools to do our job, is both contradictory and disingenuous,” Barnes said.

“At this time, due to the need to have deputies available for emergency calls for service, deputies will not be responding to requests for face-coverings or social gatherings-only enforcement,” Barnes said.

A.F. Branco Cartoon – On the Lookout

Gov Walz cares more about enforcing lockdowns for business than he does mobs burning them down. 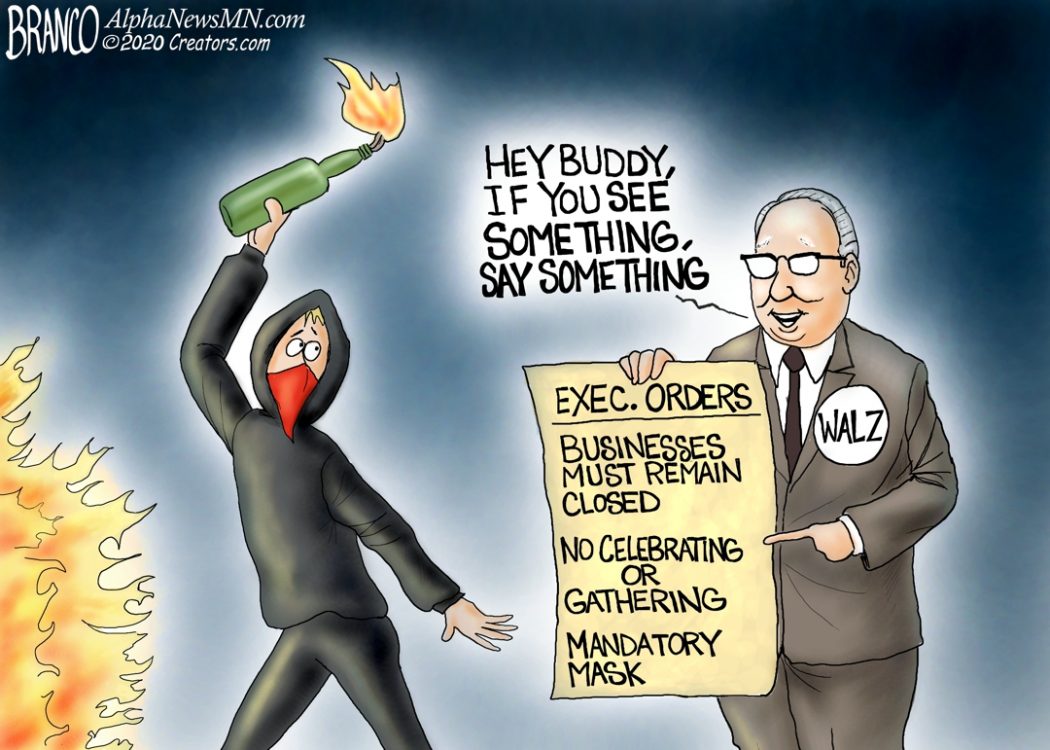 Some folks are more concerned about mean Trump tweets than handing the country over to Biden’s tyrants. 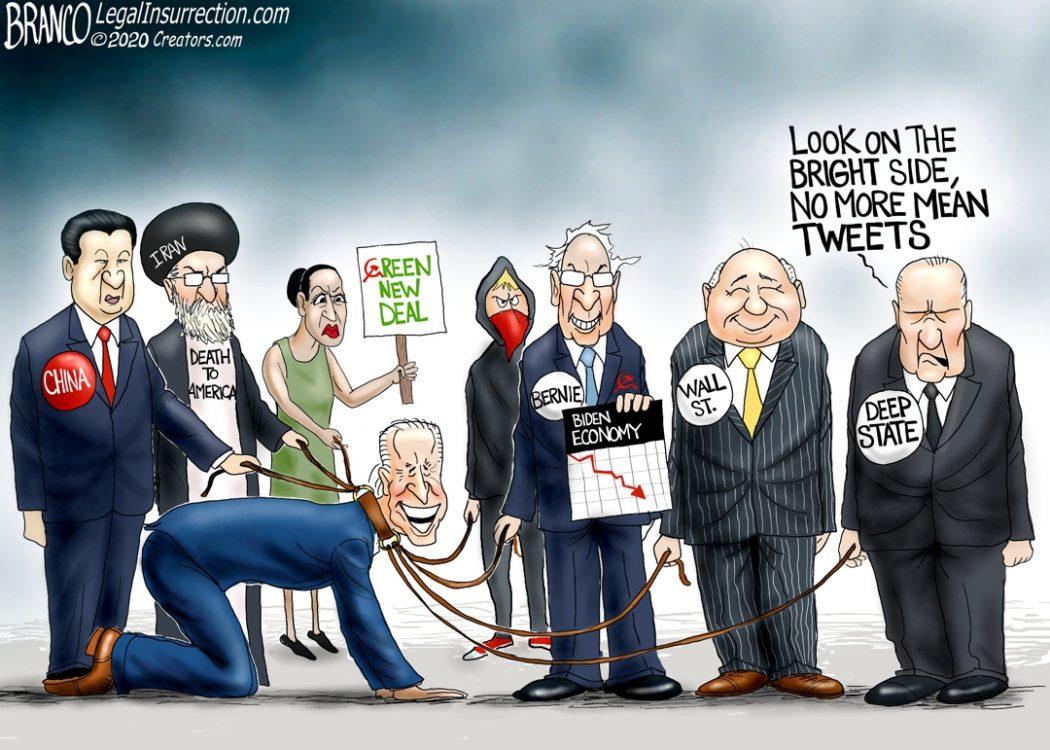 
A new survey reveals that the American public is much more accepting of churches defying coronavirus lockdowns than they were when the pandemic first broke out in March.

Paul Djupe, an affiliated scholar with the Public Religion Research Institute, and Ryan Burge, a political science professor at Eastern Illinois University, collaborated on a survey asking 1,750 Americans for their views about the coronavirus pandemic in October. They had previously collaborated on a coronavirus-related survey in March, when they spoke to 3,100 Americans.

When asked if they agreed with the statement, “If the government told us to stop gathering in person for worship I would want my congregation to defy the order,” 34% of respondents who participated in the October survey agreed (with 16% strongly agreeing). By contrast, 21.8% of Americans surveyed in March said that they agreed (with 10.7% strongly agreeing) with their congregation defying in-person worship restrictions.

The survey also analyzed the responses to the question based on political party affiliation, finding that support for defiance of coronavirus worship restrictions had increased among all party identifiers. “Our data suggest defiance is growing across the board. Even strong Democrats are urging a more defiant stance, though the growth among Republicans is much greater,” Djupe and Burge wrote.

According to Djupe and Burge, another factor explains the increased support for churches defying worship restrictions: adherence to the prosperity gospel, which teaches that “religious belief is a quid pro quo, returning a wide range of benefits for believers, especially health and wealth.”

“Prosperity gospel belief is also linked to opposition to state health orders, and the connection is easy to see: if the church is the instrument of personal health, then shuttering the church is a direct threat to personal safety during a pandemic,” they said.

They attributed the increased support for lockdown defiance among prosperity gospel believers to “the messaging they are hearing from religious and political sources,” including Republican politicians who “continue to take a freedom-first approach.”

“Agreement with prosperity gospel views has grown about 3 percent since March,” they said.

Other findings show a drop in the percentage of adults who believe “the government should tell churches and houses of worship that they should stop meeting in person to prevent the spread of the coronavirus.” While 66.1% of Americans agreed with that in March, 56% said the same in October.

As the idea that churches should defy in-person worship restrictions has gained ground since March, the idea that “hysteria over the coronavirus is politically motivated” has become less popular. In October, 22.5% of Americans strongly rejected that idea, an increase from the 14% who strongly disagreed with that assessment in March. The share of Americans who either agree or strongly agree with the idea that hysteria over the coronavirus was politically motivated dropped from 42.5% in March to 40% in October.

In their analysis, Djupe and Burge offered two theories to explain Americans’ changes in views about the coronavirus over the past seven months. The first theory contended that “people are responding to an elite messaging that combines with unorthodox Christian beliefs to promote an individualistic, go-it-alone style response,” an idea that they argue is “widespread enough to spell doom to efforts to inspire collective action against the behaviors that are spreading the virus.”

Their other explanation rests on the premise that “Trump’s gross mismanagement of the pandemic soured Americans on Trump as well as on government efforts to curtail the pandemic, which, strangely enough, redounded to the benefit of Republicans opposed to state action.” They concluded that “a bit of both explanations are in play.”

The survey comes as more states returned to strict lockdowns after reporting another surge in coronavirus cases since October.

After the Roman Catholic Diocese of Brooklyn and Agudath Israel of America sued, the Supreme Court ruled 5-4 on Wednesday to temporarily block New York’s restrictions on houses of worship, saying that the rules “cannot be viewed as neutral” and appear to violate the Free Exercise Clause of the First Amendment.