Please contact your California State district Senator and urge them to vote NO on AB 1102.

Find your rep here:  Find Address (ca.gov)
You may say something along the lines of the following:

I urge you as my representative to vote NO on AB1102.  Vaccines should never be mandated, as it goes against our freedom.  Many people do not want or cannot get the vaccine for many reasons.  The government has no right to regulate our health.  It’s my body and my choice what to put in it. VOTE NO on AB 1102. Thank you

Make sure to end the call by letting the office know that you are a constituent of your legislator. Feel free to leave your name and address if requested.

Here are some articles about the bill:

Democrats Replicating Nazi Germany and Jews With AB 1102—This Time it is the Unvaccinated (capoliticalreview.com)

Los Alamitos votes to opt out of California sanctuary law 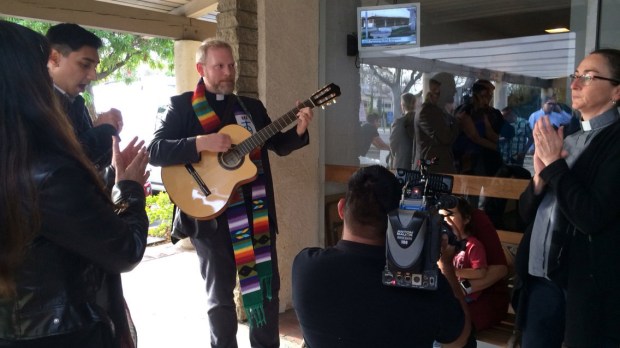 While the crowd had dwindled both in and outside the chamber when the vote came, people erupted in cheers after the vote and began chanting “USA.” But on the pro-immigrant rights side, there was this chant: “The people united, will never be divided.”

Someone shouted out to Councilman Warren Kusumoto, who introduced the legislation, “great American patriot!” while someone else screamed out “America first.”

Kusumoto said the issue was not about immigration. “This council is looking out for the constituents in our city,” Kusumoto said.

Mayor Troy Edgar said he hoped mayors in other cities consider similar local legislation. And his message was clear: “As the mayor of Los Alamitos, we are not a sanctuary city.”

The council went one step further. The majority also voted to direct the city attorney to write an amicus brief to a federal lawsuit filed earlier this month against California, alleging that three of the state’s laws are unconstitutional. One of those laws was the same one the Los Alamitos council looks to opt-out of:  the “California Values Act,” which limits cooperation between law enforcement agencies and federal immigration authorities.

Kusumoto and Edgar joined council members Shelley Hasselbrink and Richard Murphy in support of the new local law. Councilman Mark Chirco voted against it, saying adopting the new law would lead to litigation.

“I cannot see how passing this ordinance would be good for our city,” Chirko said.

Throughout the night, many in the crowd of more than 150 people from Los Alamitos, Long Beach and other communities engaged in heated debate – sometimes in front of the dais, other times with each other.

To those who oppose the ordinance, the vote was a disappointment.

“There’s been a real shift to a national, xenophobic acceptability in our society that is heartbreaking,” said Rabbi Jonathan Klein, executive director of the Clergy & Laity United for Economic Justice group. “We’re in an era of open bigotry.”

Council members in the majority said that California’s so-called sanctuary law, SB-54, puts them at odds with the U.S. Constitution.

While the state and many California communities have passed resolutions and taken other measures in support of all immigrants, regardless of status, Los Alamitos may be the first city to pass an ordinance saying it wants out of the sanctuary movement.

The council chambers, built for a town of less than 12,000 people, was at standing-room only and saw an overflow crowd listening to the hearing from outside. Though many waited patiently, emotions flew high with shouting matches erupting between those who wanted the council to vote for the ordinance and those who opposed it.

“I believe in the law. I live here and I couldn’t be prouder,” said Chris Cornell, 57, one of the residents waiting outside quietly while a screaming match ensued nearby.

Rev. Melinda Dodge, of Los Altos United Methodist Church in neighboring Long Beach, said the proposal goes against everything the community believes in and values.

Kusumoto said he introduced the ordinance because he feels the state is forcing local elected officials to violate the oath they took to uphold the U.S. Constitution.

“California legislators are bullying local elected officials into violating our oath of office,” Kusumoto explained in an interview.

A long line of speakers – 53 in all – lined up to address the council Monday night, their comments greeted with cheers and applause from different individuals, depending on where they stood on the issue. At times, the exchanges got testy.

One woman hailed the council  members as “pioneers” and urged them to pass the ordinance. Two young children pleaded they vote against it.  Others protested the proposal and said it doesn’t represent the values of the community. Some, including a representative from the ACLU, warned the council that if approved, the new local law would lead to a lawsuit.

“If you could build a big, beautiful wall along the 605 (Freeway,) even though that would inconvenience me tremendously, I would give you a thumbs up,” Long Beach resident Janet Wess told the council.

Samantha Reed, 19, a UC Irvine freshman who graduated from Los Alamitos High, told the council that she won’t forget election-time if members vote for the proposed ordinance.

“You do not represent me by passing this ordinance,” Reed said.

One long-time resident, Javier Mejia, choked up as he described that he’s proud of his Mexican heritage but is “100 percent American.” He urged the council to vote for the proposed ordinance.

The new local law is not yet a done deal. Before it becomes law, council members must vote for it a second time, which is expected. That vote is scheduled for April 16.