Unreal: Young Girl Expelled After Defending Herself from Males in School Bathroom

It’s a strange case out of a small Alaska town that’s attracted national attention — all because of what it says regarding school bathrooms and transgender access.

According to The Washington Post, a female student was expelled from North Pole High School in North Pole, Alaska, after she kneed one of several boys who had entered the girls’ room in an incident on April 4. The male students had allegedly entered the bathroom, The Post reports, as a protest against a transgender student transitioning from female to male who had taken a selfie in the boys’ room.

Fairbanks North Star Borough School District Superintendent Karen Gaborik said the boys had entered the bathroom “as a form of protest.” When the seven boys entered, however, the protest was swiftly ended when one of the girls kneed one of the boys in the groin. Now, her family says she’s been expelled.

The case went national when state Rep. Tammie Wilson, a Republican who hails from North Pole, commented on it during a House Majority news conference on Friday.

“We had an incident last week to where some boys entered the girls’ bathroom, and a girl kneed a boy, feeling threatened. They were blocking her way. And she was suspended from school because she used too much force,”Wilson said, according to KTUU-TV.

Wilson said that the girl had been prevented from leaving the bathroom by the boys and had defended herself.

“If you ever feel threatened, for your safety, whatever force you think you have to go give, I will stand by you and so will your community, and not for those boys who were where they didn’t belong,” Wilson said.

The representative told the station the girl was suspended and missed her prom — the boys were allowed to attend, she said. But the student’s sister took to Twitter to say the girl had actually been expelled. The school wouldn’t confirm what happened to the female student, merely stating that the boys had also been disciplined for “attempting to enter the girls’ bathroom.”

“Gaborik said that in her Fairbanks-area school district, which is geographically ‘larger than the state of Connecticut,’ transgender students can choose to use a gender-neutral, single-stall bathroom that corresponds with the student’s gender identity, or the one that corresponds with the student’s gender at birth,”Meagan Flynn reported in The Post on Monday.

“The decisions are made on an individual basis for each student based on whatever is most comfortable, she said. At North Pole High School, about 16 transgender students have attended the school in the last three years, she said.” 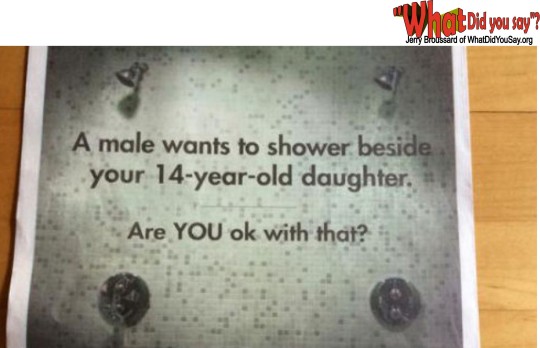 She told The Post that students are encouraged to seek out school staff when they feel threatened, not to act out themselves.

“We do not advocate physical or psychological violence as a means to attain safety,” Gaborik said.

“The entire school community needs to work together to ensure that all students feel welcomed, safe and are able to learn and thrive. We recognize that parents, students and members of our community feel strongly about these issues, but advocating for the use of violence does not contribute to a safe learning environment.”

As for the threat, Gaborik told The Post that an investigation by school administrators found that there was “not evidence that the boys were threatening any student or using any type of force toward students.”

Leaving aside the initial question of the transgender student taking a selfie or the reaction of the boys to it, exactly what wouldn’t make seven males in the girls’ room threatening to the girls inside? Yet the school apparently wants us to pretend nothing threatening happened and that this girl’s reaction was somehow worthy of an expulsion.

“She did the right thing, and we should be backing her, not having her sitting at home wondering whether she made the right decision or not,” Wilson told KTUU.

In another interview with the Fairbanks News-Miner, Wilson framed the question as self-defense.

“Was she supposed to not protect herself?” she said. “She was where she belonged. They were not.”

Meanwhile, Gaborik told The Post that all students disciplined in the situation have the right to appeal any measures taken in the incident. The girl’s family says that they will — and we can only hope that sanity prevails.

C. Douglas Golden is a writer who splits his time between the United States and Southeast Asia.