He was asked to kneel today, and this was his response. 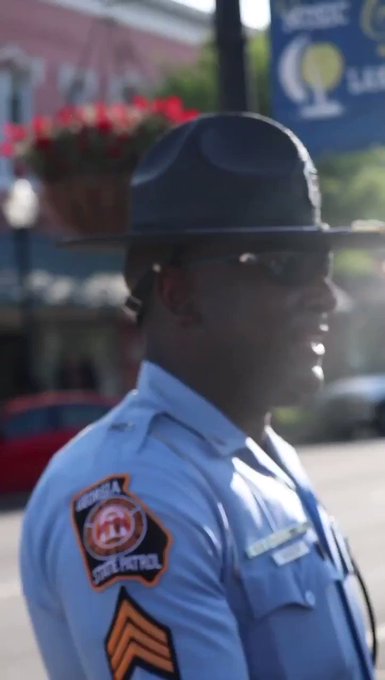 This is the kind of officer we need nation wide, much to respect this man.

99 people are talking about this

God bless that state Trooper and his family. That’s an American I am very proud of him.

32 people are talking about this

This is a true hero!

That’s the best answer ever.

Of course, there were a few liberal knuckleheads ready to jump in with irrelevant jibes (there was at least one mocking comparison to President Donald Trump’s visit to St. John’s Episcopal Church in Washington, D.C., for instance).

But the overwhelming majority of comments were approving — and grateful.

At a time when Americans are being assaulted daily with lies about the nation’s supposedly “racist” police forces based on the actions of the tiniest sliver of their membership, and watching as liberal politicians attack the men and women who actually protect law and order, a statement of quiet dignity and faith like the one out of Georgia carries weight.

In the over-inflated, and clearly manipulated reactions to the death of George Floyd in Minnesota on May 25, protesters across the country have screamed for police to kneel with them as a gesture of conciliation, as Fox News has reported. (Bizarrely, even that peaceful move is drawing heat from progressives now, according to ABC News.)

But one state trooper, with a respectful demeanor and gentle logic that only added strength to his words, gave the answer that every law enforcement officer — and every American — should take to heart.

For free Americans, kneeling is reserved for one power only — and that’s not the rabble of Black Lives Matter movement.

Joe Saunders
Story Editor
Joe has spent more than 30 years as a reporter, copy editor and metro desk editor in newsrooms in Pennsylvania, West Virginia and Florida. He’s been with Liftable Media since 2015.
Facebook