Move Oregon’s Border for a Greater Idaho, a group of conservatives in rural Oregon, are fed up with not being represented in their state’s government and have started a petition to leave the state by moving the border with neighboring Idaho westward. Mike McCarter, Chief Petitioner for Move Oregon’s Border for a Greater Idaho, says those in his group feel they are not being heard by their representatives in the state legislature.

A group of frustrated Oregon conservatives, who have tried everything from voting out Democratic state officials they consider too liberal to recalling the state’s governor and appealing to their Washington representatives, now want to leave the state – by moving the border with neighboring Idaho westward, a published report Monday said.

The group, Move Oregon’s Border for a Greater Idaho, has secured initial approval from two counties and has set a goal of getting enough signatures to put the proposal on local ballots in November, USA Today reported.

Barring a setback, voters in southeastern Oregon could see a question on a redrawn state border with Idaho, the newspaper reported.

“Rural counties have become increasingly outraged by laws coming out of the Oregon Legislature that threaten our livelihoods, our industries, our wallet, our gun rights, and our values. We tried voting those legislators out but rural Oregon is outnumbered and our voices are now ignored. This is our last resort.”

However, Valerie Gottschalk, another petitioner, said she hopes the proposal will gain traction similar to how the petition to recall Gov. Kate Brown did last summer. 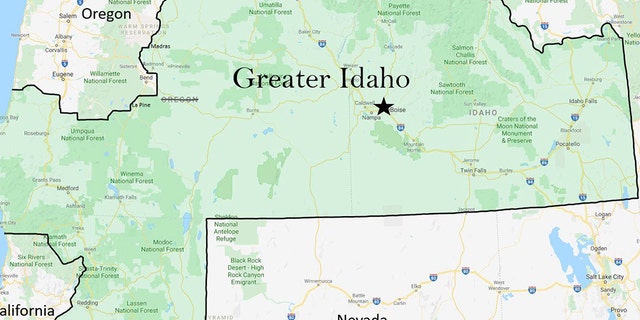 A group of frustrated Oregon resident fed up with the state’s liberal policies in state government are proposing a petition to leave the state and join neighboring Idaho (Greater Idaho Group).

Proponents were unsuccessful collecting the 280,000 signatures for a recall election, but Greater Idaho said it only needs to collect about 2,400 signatures from Josephine County and about 3,000 from Douglas County to appear on the ballot, USA Today reported.

“People here would prefer Idaho’s conservative governance to the progressive/liberal current Oregon governance. Every time I look at the Facebook group Greater Idaho, the group has gotten bigger,” Gottschalk said in a news release.

Of Oregon’s 36 counties, only 14 in the Willamette Valley area would remain if the group succeeds, the newspaper reported. Moving the border would require approval from the U.S. Congress as well as the Idaho and Oregon state legislatures, however.

The proposal to join Idaho isn’t the first effort Oregonians have made to leave the state. In 1941, residents of residents of southwestern Oregon tried to secede by creating a state of Jefferson with northern Californians.