Blue State Governors like Tim Walz have removed the turkey and put Civil Liberties on the chopping block. 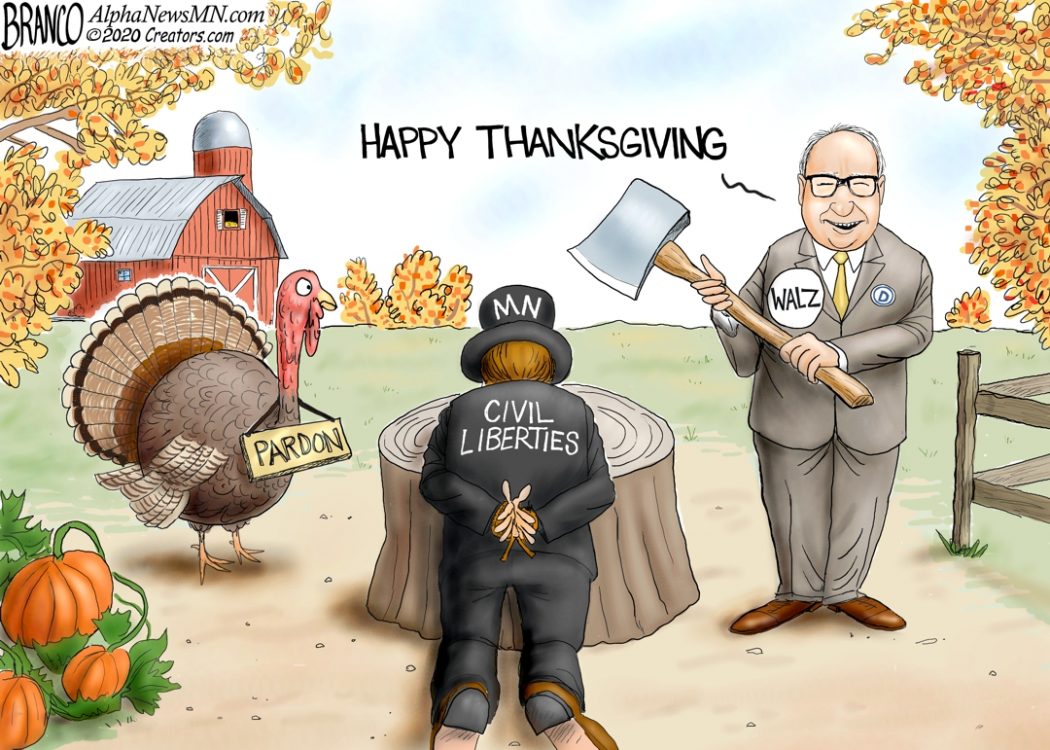 Folks who attended a Trump rally in Washington DC were violently mobbed as they were leaving by Antifa and BLM. 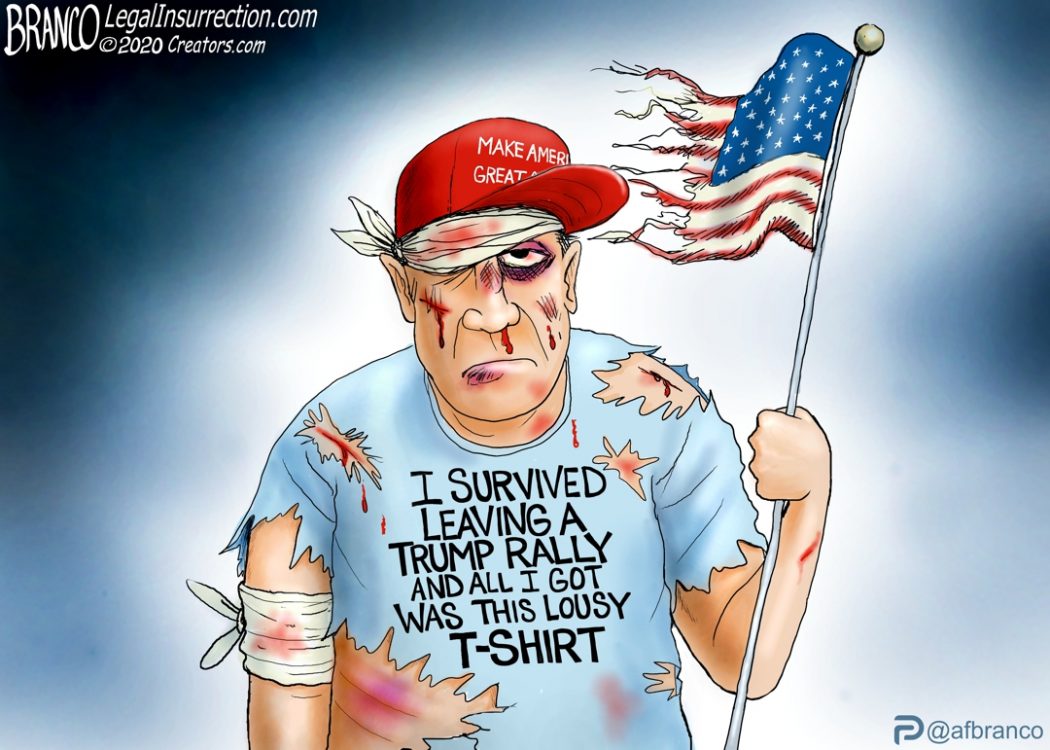 It was another HIGH ENERGY rally.

Following the rally last night Trump 2020 Campaign Manager Brad Parscale posted this on the attendees.
This ought to keep the radical socialists running the Democrat Party up late at night!

Protests outside a Trump rally in Minneapolis went completely disrespectful once again when some left-wing extremists attacked Trump’s supporters as they were walking by.

In a video captured by journalist Andy Ngo, you can clearly see one woman assault a female Trump supporter who was leaving the rally. The woman was walking with what appears to be her boyfriend who is wearing a “Make America Great Again” hoodie

Thank goodness for Andy Ngo and his journalism in these dangerous protests full of violent liberals.

After the @realDonaldTrumprally in Minneapolis, his supporters were attacked by left-wing extremists. An unprovoked assault on a woman was caught on camera by @AlphaNewsMN. Mayor @Jacob_Frey defends charging Trump campaign $530k for public safety. #antifa https://youtu.be/5viO3shoJyw

This isn’t the only thing that happened. Prior to the rally, another older man Trump supporter was spat on by a leftist protester.

Before the same rally, a far-left protester spit on an older gentleman wearing a MAGA hat. The moment was caught on video by Vice News; the Trump supporter was mid-interview with the outlet when he was victimized.

“Dave Carlson, a salesman in Minnesota, was sharing why he donates to President Trump’s campaign when a protestor openly spat in his face and kept walking by,” reported Vice’s Elizabeth Landers.

“That’s not how people really feel, that is f***ing disrespectful,” another anti-Trump protester told the victim. “On the other hand, that s*** is disrespectful as f***, too,” he added, pointing to the Trump hat. “So there’s a difference.”

The Trump supporter told him he “respects” his “opinion.”

If this isn’t a wake-up call to Americans everywhere then what will be?

If you’re adjoined to the political party that is spitting, cussing, and hitting people for having a different opinion, you may want to reevaluate things.

PLEASE NOTE: No RIOTS At Trump Rally In Texas … Is THIS The Reason?

Trump’s rally in Texas seemed to go very differently than the ones that took place in California, and none of his supporters were harmed or attacked. Do you think there’s a reason for this? Short answer: Yes; and it’s a big one. The fact that Texas is an open carry state might have been the reason:

Do you think Anti-Trumpers were SCARED to riot in Texas?Protesters massed outside, but so did pro-Trump ‘open carry’ activists legally toting rifles as they watched.

A group of pro-Trump activists from the ‘open-carry’ movement brought their rifles to Trump’s event, a practice that is legal in Texas – but Secret Service wouldn’t allow the weapons inside.

One anti-Trump protester did attack by throwing a rock at a reporter’s head. That protester is lucky he didn’t hit an open-carry Trump supporter:

Donald Trump landed deep in the heart of Texas on Thursday and asked for a ride on a mechanical bull – or some other hooved animal – as he curried favor with Lone Star Republicans by pledging to embroider ‘Make America Great Again’ on cowboy hats.

Speaking to about 4,000 people inside Gilley’s, a honky-tonk music hall in Dallas, the presumptive Republican presidential nominee joked that he couldn’t see the joint’s signature prop – the mechanical bull made famous by the 1980 John Travolta-Debra Winger movie ‘Urban Cowboy.’

Only in Trump’s world, the test of drunken manhood that tosses bar patrons in the air was a horse, not a bull.

‘I’ve read about this place for a long time! Where’s that horse? I want to go on the horse!’ he boomed. ‘Hey, you wanna hit the papers tomorrow? Let’s get that horse. I’ll ride that horse.’

He did eject a half-dozen protesters, including one pasty, bearded 40-something man wearing a white cowboy hat.

‘I love that idea!’ he yelled. ‘Thank you, mister protester! Boy, that’s going to sell well in Dallas, let me tell you.’

Things are getting more and more violent in California. How bad do you believe it is going to get? Will this cause a war to break out?

The Los Angeles Police Department is bracing for a long weekend of political demonstrations following the California arrival of GOP presidential front-runner Donald Trump and boisterous protests in Orange County. In the aftermath of clashes at an appearance by Trump in Costa Mesa on Thursday evening, thousands of unionized janitors took to the streets of downtown Los Angeles on Friday afternoon to demand higher wages and expanded rights.

The janitors, whose contract expires Saturday, began their rally at Grand Park at noon. Janitors say they could strike as early as next week against what they say are unfair labor practices by major janitorial companies.

On Saturday, supporters of Democratic presidential candidate Bernie Sanders are expected to converge on downtown L.A. for a march and rally tied to International Workers’ Day, or May Day, on Sunday.

But the largest crowds are expected to gather downtown Sunday to demand equality for immigrants and protest Trump’s controversial statements about people from Mexico and Muslims.

“We have a very active three days with the Janitors for Justice today at midday, Bernie Sanders on Saturday and May Day march Sunday,” said LAPD Assistant Chief Michel Moore. “We’ll be using the play book that we have successfully used for a number of years.”

The janitors’ march is unpermitted and may disrupt the city’s downtown core, but police will accommodate the protest, Moore said.

Demonstrations in Costa Mesa on Thursday resulted in 17 arrests and damage to several police cars as large crowds of Latino protesters vented outrage at Trump’s claim that Mexico was sending rapists over the border.