Many people, organizations and countries have made their disapproval of Russia’s invasion of Ukraine very clear since it began last week.

Companies have stopped working with Russia. The royal family, generally quiet on political matters, has publicly condemned the invasion. Even Switzerland has moved to sanction Russia.

Plenty of celebrities have used their social media platforms to decry Russia’s actions. Tim Allen has joined their ranks, stating in no uncertain terms how he feels about the situation.

“My mind and body are full of anger and disgust at the coward putin ghouls that have attacked a sovereign country,” he tweeted on Thursday.

“This is the definition of wrong. My head, heart and soul pray for the people of Ukraine.

Allen also shared his sentiments last week as news of war began circulating, asking for prayer for the Ukrainians under attack.

“‘Appeasement’ is the policy of feeding your friends to a crocodile, one at a time, in hopes that the crocodile will eat you last. – Franklin D. Roosevelt,” he tweeted on Feb. 24.

“Pray if you will for all those attacked today by the Russians.”

While many in the replies pointed out that the quote was misattributed to FDR and actually comes from Winston Churchill, Allen’s point remains.

Other celebrities have posted in solidarity with Ukraine and pointed followers to charities that will help where the need is greatest.

Actress Mila Kunis, who is Ukrainian, and her husband Ashton Kutcher have started a GoFundMe for Ukrainian refugees, pledging to personally match up to $3 million.

The celebrity couple hopes to raise $30 million to help those fleeing the country through Airbnb, which is offering free temporary housing to refugees, and Flexport, which is “organizing shipments of relief supplies to refugee sites in Poland, Romania, Hungary, Slovakia and Moldova,” according to the GoFundMe page.

“While we are witnessing the bravery of Ukrainians, we are also bearing witness to the unimaginable burden of those who have chosen safety,” the page reads.

“Countless amounts of people have left everything they know and love behind to seek refuge. With nothing but what they could carry, these Ukrainian refugees are in need of housing and supplies right away.”

Amanda holds an MA in Rhetoric and TESOL from Cal Poly Pomona. After teaching composition and logic for several years, she’s strayed into writing full-time and especially enjoys animal-related topics. 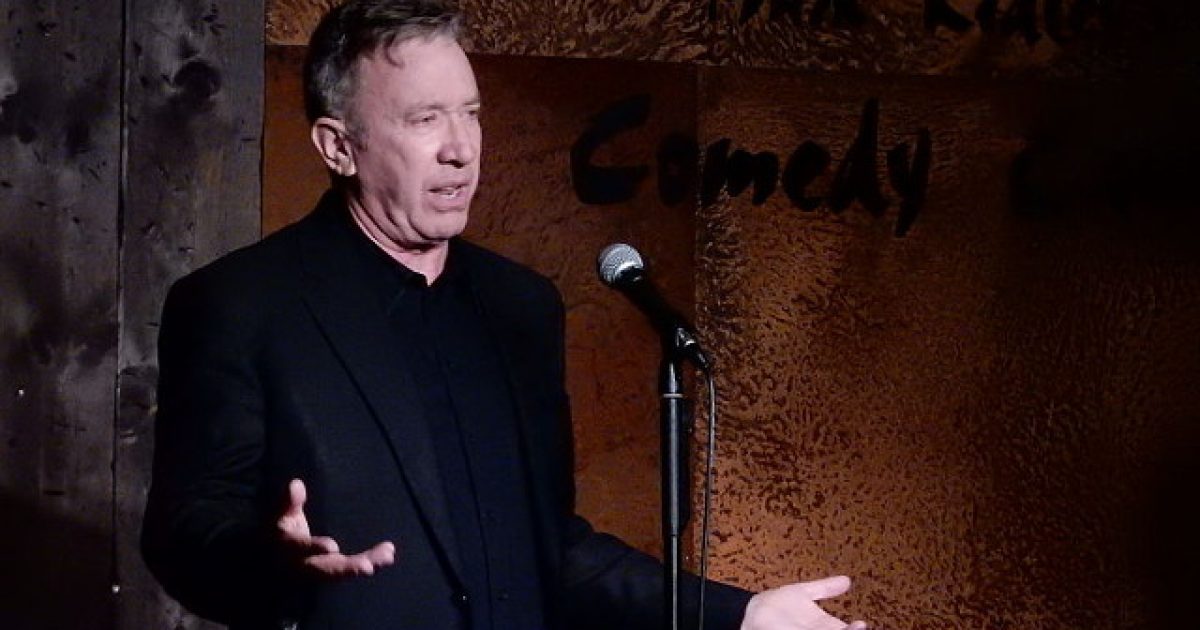 Tim Allen’s sitcom, Last Man Standing, was canceled by the liberals at ABC even though it was a ratings leader on the network. But now that Fox has picked the show up, Allen is having the last laugh as his show becomes one of Fox’s ratings leaders.

ABC cancelled Last Man Standing after its sixth season, even though it was still among ABC’s top rated shows. There was only one reason for its cancelation. It wasn’t because the show was failing. It was because ABC executives hated the fact that Allen’s show often featured conservative subject matter.

But only a few months after it was unceremoniously dumped by ABC, Fox TV picked the show up for a seventh season. Now, much to ABC’s dismay, Last Man Standing has become a new ratings leader for Fox.

According to CinemaBlend, LMS has proven Fox executives right for having taken on the show.

What’s especially exciting is that Last Man Standing has only increased in its dominance since returning at midseason to a 1.0 rating in the 18-49 demographic and 5.66 million viewers. During the January 11 airing, the show actually did a 1.2 rating and increased to 6.21 million total viewers, per TV By The Numbers.

If you look back over Season 7, that’s the highest the show has done in total viewers since the November 9 episode, which brought in 6.3 million total viewers. But forget total viewers, because in total viewers Last Man Standing often loses to its CBS competitors like Blue Bloods and MacGyver. Where Last Man Standing really shines is the coveted advertising demographic, and that’s where Fox should be clapping backs–all the way to the bank.https://lockerdome.com/lad/10817563773098342?pubid=ld-7985-7177&pubo=https%3A%2F%2Fflagandcross.com&rid=&width=740

In one of the series’ most recent episodes earned the highest ratings of any network TV show on Friday.

“This Friday, Last Man Standing pulled a 1.2 rating, which just so happens to be a number that is a whole lot higher than everything else network TV aired on Friday night,” CB reported. “It’s closest competitors were Fox’s own The Cool Kids, with a 1.0 rating, and CBS’ Hawaii Five-0, with a .9 rating.”

Fox execs are now reaping the rewards and dancing on ABC’s grave.

In any case, the show is still a hit and has maintained its audience despite ABC’s attempt to destroy it because it is a conservative show.

Though airing at 8 p.m. Friday nights, Last Man Standing pulls only slightly fewer viewers than ABC’s No. 1, socially liberal, comedy Modern Family — airing at 8 p.m. on Wednesdays — which ABC did renew. The Live+7 viewership (those who watch the program live or within seven days on DVR) total is 8.1 million for Last Man Standing compared to Modern Family’s 8.7 million.

Despite being in its sixth season, the program only saw a modest 5 percent decline in viewership, in comparison to other shows which are normally down as much as 20 or 30 percent at this point in their television life, according to Deadline.

Variety reports, “Last Man Standing was ahead of the curve in the cultural sense as Allen played a conservative-minded patriarch who runs a sporting goods store and opines about the modern world, including political topics such as Obamacare and environmental policy.”

Appearing on Jimmy Kimmel Live in March, Allen said it is dangerous to be politically conservative in Hollywood, as he recounted attending President Donald Trump’s inauguration.

“I’m not kidding. You gotta be real careful around here. You get beat up if you don’t believe what everybody believes,” Allen said.

“This is like ‘30s Germany,” he added. “I don’t know what happened. If you’re not part of the group, ‘You know what we believe is right,’ I go, ‘Well, I might have a problem with that.

The actor, who describes himself as a fiscal conservative, endorsed fellow Midwesterner and Ohio Gov. John Kasich during the presidential primaries. Allen did not endorse Trump during the general election, but did speak out last November against Hollywood liberals trying to bully others who supported him.

As reported by Western Journalism, Disney CEO Bob Iger defended his corporation, which is the parent company of ABC, against charges of being liberally biased during the annual shareholder meeting in March.

Iger was questioned whether Disney would continue to cater to “liberal coastal elites or make your company welcoming to all Americans?”

The CEO denied Disney was only focused on producing programming agreeable to liberals.

Iger, who co-hosted a Beverly Hills fundraiser for Hillary Clinton last August, has agreed to be part of the president’s Business Advisory Council.

“I don’t believe my membership in that group in any way endorses or supports any specific policy of the president or his administration,” Iger told shareholders, who opposed his participation.

Fans of Last Man Standing are hoping the show will be picked up by Netflix or some other outlet. The first five seasons of the show are currently offered on Netflix.

Tim Allen Compares the Clintons to Herpes: ‘Just When You Think They’re Gone, They Show Up Again’

Actor-comedian Tim Allen blasted Hillary Clinton in a recent interview, comparing her and her husband Bill to a venereal disease while praising Donald Trump as a candidate who “might be able to do the stuff that really needs fixing.”

In an extensive interview with The Hollywood Reporter to discuss his sitcom hit Last Man Standing, Allen weighed in on the state of the 2016 presidential race, telling the outlet that the Democrat party of

“Unearned responses, unearned praise, unearned income: I have opinions about it,” the 62-year-old actor told THR when asked what “riled” him up the most.

“When you watch the debates, on both sides you see clowns who say sh*t that ain’t ever gonna happen, but lately one party is the free sh*t party,” Allen explained. “When you say you’re going to get free education, free health care, f— free brown loafers — of course everybody’s going to say yes to that. But you don’t mean it. That’s how you rack up debt, and debt is killing us. Whatever party is going to get us out of debt is my party.”

Allen also lit into both Clinton and Sanders, specifically: “Bernie Sanders, as nice a guy as he is, none of that sh*t’s going to happen,” he said.

But the comedian saved his sharpest barbs for Clinton. When asked why the writers at Last Man Standing have skewered Hillary and not Trump, Allen compared the Clintons to a venereal disease.

“We have a very liberal writing staff, so I’m surprised they haven’t taken a shot at [Trump],” he told THR. “But we’re not sure he’s going to last, whereas the Clintons are like herpes: Just when you think they’re gone, they show up again.”

On Last Man Standing, Allen stars as Mike Baxter, a conservative-leaning “man’s man” who finds his worldview challenged in a home with three daughters and a successful wife. Allen told THR that he “definitely” feels the line between himself and his character has blurred over the course of the show’s five-season run:

“If you go see my stand-up at the Mirage in Vegas — I’m on a concert tour this year, as I have been for 30 years — it tends to be very angry about self-reliance. I’m not going to say it’s conservative, but it certainly is not left. For most of my life, I’ve been taxed above 38 percent. When you’re a young guy working the road and literally close to half of what you make goes to people who don’t help you at all but just bitch about it the whole time, that’s where I come from. I come from “no taxation without representation,” and it manifests itself in very peculiar points of view.”

Allen also knocked Trump, saying the Republican front-runner “can’t send everybody to Mexico or whatever the f–k he said.”

“But give that guy the roads, bridges, infrastructure, power grid — just have him fix that sh*t for four years. He’s good at that,” added Allen. “And he’s a businessman so he understands how debt load works. Forget the stupid sh*t he says about immigrants. That’s just ignorant. But he might be able to do the stuff that really needs fixing.”

Check out the rest of Allen’s interview with The Hollywood Reporter here.

“You see the world is kinda opposite of Hillary Clinton.”

It’s not every day that a Hollywood actor comes out as a conservative, but Tim Allen is no stranger to controversy.  In the 1990s, Allen became an A-list actor when he played Tim Taylor on the hit show Home Improvement.

Now, in the fifth season of Last Man Standing, Allen is playing Mike Baxter, a “very smart Archie Bunker” character who pokes fun at sensitive issues without the scandalous comments Bunker often made.

On Thursday, Allen was a guest on Fox News’ Hannity, discussing his fiscally conservative ideas.

Host Sean Hannity showed a clip of the show in which Allen’s character made the comment: “You see the world is kinda opposite of Hillary Clinton. It actually gets less scary the better you know it.”

Hannity followed up with a question: “How close to Tim Allen is Mike Baxter?”

“I’m what they call fiscal conservative,” he said.

Allen made fun of politicians who think they can “spend their way out of debt.”

Hannity and Allen talked about how easy it would be to balance budgets by taking one penny from every dollar, every year for six years, suggesting budget issues would be a thing of the past.