Posts tagged ‘The Constitution of the United States of America’

A.F. Branco Cartoon – Ashes, Ashes We All Fall Down

COVID-19 has revealed that Democrat’s quest for power overrides their oath to protect the constitution. 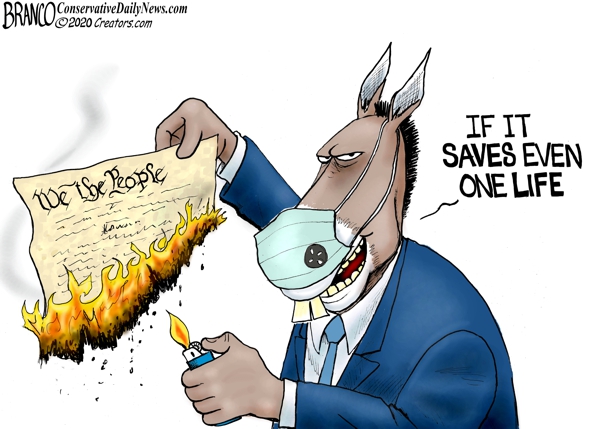 An Arkansas mom was disturbed to learn her sixth grade daughter’s homework was to “prioritize, revise, prune two and add two” amendments in the Bill of Rights. The homework, part of the controversial Common Core curriculum, said that the Bill of Rights is “outdated and may not remain in its current form any longer.”

A copy of page 1 of the assignment: And page 2 here.

Lela Spears was particularly disturbed because her daughter’s Sixth Grade History class “had received no prior training in civics or how to amend the Constitution, which may lead those children to incorrectly believe that it can be changed by a ‘special committee’ as suggested by the assignment,” Digital Journal reported:

“After she brought it home and explained her assignment to me, it made me question exactly what she was being taught. Where I can see a class using critical thinking skills to modernize the words, as to help them better understand the Amendments, giving an assignment to remove two then add two with little explanation as to why is upsetting,” Lela Spears said.

The first ten amendments to the Constitution, also known as the Bill of Rights, contain amendments that guarantee the right to free speech, assembly, the right to bear arms, due process, trial by jury, no cruel or unusual punishment, and limits to Federal power.

This homework was part of the Common Core curriculum which parents have been clamoring to replace in several states. Jeb Bush and Hilary Clinton are very public fans of the curriculum.

CNSNews.com contacted Devin Sherrill from Bryant Public School District for comment, who provided a statement (Facts Regarding Bill of Rights Assignment (1).pdf) by the district on the incident explaining:

“In cases like this, it’s necessary to look at the curriculum as a whole. When taken out of context, it’s difficult to find the intent of the assignment. Seen as a unit of study, it should be clear that students discussed the process of writing the Constitution, were given instructions on the Bill of Rights and asked to apply that knowledge to a project based assignment…”

The press release does not explain why curriculum writers felt part of learning about the Bill of Rights included asking children to remove two of them.

Are any of the rights unnecessary? Which is more important to you: freedom of speech, or freedom of religion?

“Guns are a lot like parachutes  If you need one and don’t have one, you’ll probably never need one again”

This is the best presentation on gun control yet. Even if you don’t like guns, watch this! Should be required viewing by both sides of the issue of gun control/legislation. Although this is a spoof (The Virtual President) this man knows the constitution.  Watch the faces on some Senators in the audience.