Ron DeSantis broke those on the left to the point they are longing for Donald Trump back, and you love to see it. Crowder recaps all of “Martha’s Vineyard-ghazi” and debunks all the mistruths peddled by the left. Also, a female cop got pummeled at a traffic stop. And Crowder discusses the trans shop teacher with the obscene fake boobs. That and more on Tuesday’s episode of “Louder with Crowder.”

Listen to the podcast here.

To enjoy more of Steven’s uncensored late-night comedy that’s actually funny, join Mug Club — the only place for all of Crowder uncensored and on demand.

Watch: Undercover Video of Abortion Patient Will Turn Your Stomach


There has been a lot of discussion in recent months about the legislative push from Democrats in a number of states to expand the “right” of abortion up until the moment prior to birth — even as the left routinely denies that late-term abortions are a thing — so a conservative pundit used hidden cameras to try and find out more about how a woman would go about getting a late-term abortion.

Steven Crowder, who is typically known for his hilarious takedowns of leftist absurdity, abandoned any pretense at humor for this grave topic. Instead, he paired up with two women who would wear hidden cameras to obtain undercover footage inside an abortion clinic in Boulder, Colorado, where late-term abortions are legal.

Those two women were Muriel, who was 25 weeks pregnant with a baby named “Rose,” and her friend Kat, who would accompany her as “moral support” as she pretended to be in search of an abortion procedure at the clinic.

While the goal may initially have been to catch damning evidence on video about the clinic and late-term abortions, the two women were instead relegated to the clinic’s waiting room for quite some time, where they engaged in a shocking and heartbreaking discussion with another woman identified only as “Patient X,” who was waiting to receive a late-term abortion.

Patient X revealed that she was somewhere between 28 and 32 weeks — 8 months — into her pregnancy. At 32 weeks, an unborn baby is all but fully-formed and completely viable outside the womb, presuming there are no serious life-threatening deformities or serious health issues. Indeed, Patient X further revealed a short time later that there was absolutely nothing wrong with her unborn baby, as had been revealed by prior checkups, specific tests, sonograms and ultrasounds.

In the meantime, the patient quietly explained to the two women what she had learned was involved in the late-term abortion procedure, which began with an injection into the womb of a lethal cocktail of chemicals that would stop the unborn baby’s heartbeat within ten minutes to a few hours.

She then noted that the recipient of the procedure had to walk around for the next few days still carrying the dead baby, and worried about the possibility of contracting sepsis, or an infection of the bloodstream, from the dead infant still being carried in the womb, not to mention other risks the procedure posed, such as a damaged or perforated uterus.

Patient X mentioned that she had attempted to ask the doctor about her concerns, but he had “Kind of shoved it off like it was no big deal.” She further revealed that this was her third attempt at obtaining an abortion, as two previous efforts — first at 10 weeks, again at 18 weeks — had been unsuccessful for one reason or another.

It is worth pointing out that Patient X, who admitted to having already birthed two children, was far from gung-ho about getting the abortion, as she was obviously struggling with the choice to terminate her pregnancy, and she thought it was “not right” to end a pregnancy so late and suggested it all boiled down to money.

She further revealed that her husband largely disagreed with her choice to get an abortion and worried how it would impact their relationship going forward. She also expressed her own indecision on the irrevocable choice she was on the verge of making, as it was counter to everything she had believed and learned in her Catholic upbringing.

The video later showed that, after the two women had left the clinic, they prayed on behalf of Patient X, that God would intervene and prevent her from obtaining the abortion that day in order to save the innocent unborn baby’s life.

Unfortunately, it is unknown whether Patient X followed through on getting that abortion or not, and Crowder pointed out in his video that, even if late-term abortions were as rare as abortion advocates claim it to be — purportedly only about 1 percent of all abortions — there would still be more than 10,000 such late-term abortions every year, a monstrous and horrifying figure.

Sadly, far too many elected Democrats — including many of the prominent candidates running for president — see nothing wrong with murdering innocent babies, as they are all-in with a party and movement that has rejected God and is increasingly anti-life and anti-women … pretty much the opposite of what they claim with a smile when speaking to average Americans who abhor the practice of late-term abortions. 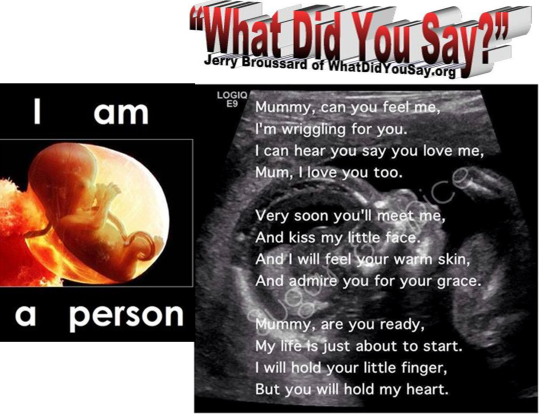 Ben Marquis is a writer who identifies as a constitutional conservative/libertarian. His focus is on protecting the First and Second Amendments. He has covered current events and politics for Conservative Tribune since 2014.
Facebook

Posted on September 12, 2014 by Conservative Byte

Steven Crowder is at it again. Showing the facts of the lie of the “moderate Muslim” with a little humor mixed it.

It is amazing how liberals can’t come to grips with the idea of an evil religion.