A member of the Norwegian parliament has nominated the Black Lives Matter movement for a Nobel peace prize, citing its demands for a systemic change to law enforcement around the globe. Petter Eide, a member of the of the Socialist Left Party of Norway, credits Black Lives Matter with bringing attention to the worldwide issues of racism and inequality, reported The Guardian on Friday.

“They have had a tremendous achievement in raising global awareness and consciousness about racial injustice,” Eide said. “They have been able to mobilize people from all groups of society, not just African-Americans, not just oppressed people, it has been a broad movement, in a way which has been different from their predecessors.”

In terms of whether or not the movement has actually been peaceful, Eide claimed that “studies have shown that most of the demonstrations organized by Black Lives Matter have been peaceful. Of course there have been incidents, but most of them have been caused by the activities of either the police or counter-protestors,” according to The Washington Examiner.

However, the Insurance Information Institute reported on Property Claim Services (PCS), a company that tracked insurance claims during the Black Lives Matter riots that took place from May 26-June 8, 2020, caused the most costly damage of any civil disorders in U.S. history. According to PCS, the riots amassed an enormous amount of damage that caused between $1-2 billion in insurance claims from property owners. Despite claims of few “incidents,” the facts show that several of these protests, namely the ones that took place in Minneapolis, MN, and Kenosha, WI, resulted in massive damages and financial losses.

FOX news commentator Katie Pavlich pointed out the apparent disconnect between Eide’s claims of peacefulness and the level of destruction during the riots of 2020 in a tweet.

The winner of the Nobel peace price will be decided by the committee in October, and the prize itself will be awarded this December.


President Trump was nominated for a Nobel Peace Prize earlier this month. It should have happened years ago.

A member of the Norwegian Parliament, Christian Tybring-Gjedde, nominated President Trump for the Nobel Peace Prize after Trump successfully accomplished a peace deal between Israel and the United Arab Emirates (UAE).

And then President Trump was nominated a second time for the Nobel Peace Prize, this time by Magnus Jacobsson for his historic Kosovo-Serbia Peace Agreement.

Magnus Jacobsson: I have today nominated the United States :s administration and the governments of Kosovo and Serbia to the Nobel Peace Prize for their joint work for peace and economic development, through the cooperation agreement signed in the White House. Trade and communications are important building blocks for peace.

Magnus Jacobsson is the Second Deputy Chairman of the Transport Committee in the Swedish Parliamant (Riksdag).

And on Monday President Trump was nominated for his THIRD NOBEL PEACE PRIZE for his “Trump Doctrine.”

President Trump will be nominated for a third Nobel Peace Prize by for his extraordinary peace doctrine. It was expounded upon last night by Secretary of State Mike Pompeo.

Sky News Australia reports:
Eminent law professor David Flint is among four Australian law professors who are nominating US President Donald Trump for the Nobel Peace Prize on the basis of the “Trump Doctrine”.

Only members of a national parliament or law professors are able to nominate others for the Nobel Peace Prize with President Trump already receiving two nominations for his promotion of peace in the Middle-East.

Professor Flint told Sky News host Alan Jones the Trump Doctrine is “something extraordinary” and is emblematic of the two things which guide the president. “He has, firstly, common sense, and he is only guided by national interest … and therefore an interest in the western alliance,” he said.

ABOUT THE AUTHOR:
Jim Hoft
Jim Hoft is the founder and editor of The Gateway Pundit, one of the top conservative news outlets in America. Jim was awarded the Reed Irvine Accuracy in Media Award in 2013 and is the proud recipient of the Breitbart Award for Excellence in Online Journalism from the Americans for Prosperity Foundation in May 2016.

Peace is the Prize

Most people know that although Trump’s policies would be responsible for a permanent peace solution with N. Korea, it’s doubtful he would receive any credit from the media. 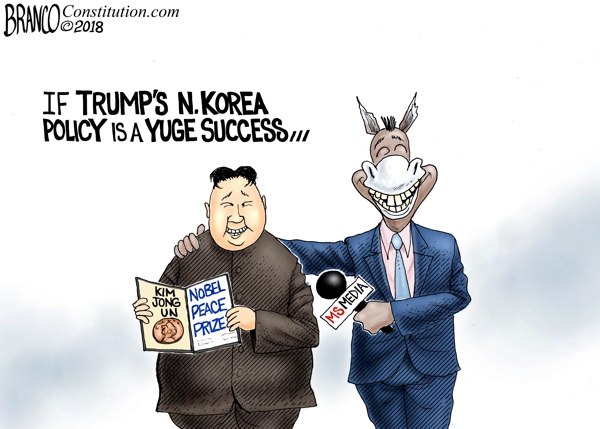