Teachers’ unions have a long history of political action, but now teachers unions are advocating for gender identity and Critical Race Theory (CRT) to be taught in schools. This recent push has come because of the support of the Biden administration, experts tell the Daily Caller News Foundation.

Teachers unions have been notorious for entering political races; in the 2021-2022 school year, the nation’s two largest teachers unions, the National Education Association and the American Federation of Teachers, poured millions into political funding. The belief that gender ideology and CRT should be in classrooms has long been present, but the Biden administration has empowered the beliefs to be embraced, experts told the DCNF. (RELATED: Major Teachers Union Goes On Strike, Delaying The First Day Of School For Thousands)

“I was a former school board member from 2016 and 2020 and we did not see this stuff like we’re seeing now,” Laura Zorc, director of education reform for Building Education for Students Together, a parental rights in education organization, told the DCNF. “I was not a school board member under the Biden administration. I’ve seen a radical change starting to take place in January 2021 when he took office. Underneath the school districts, you had people that had those beliefs in those feelings that we should be embracing this, but there was never that support and this is really where we see all this coming from, the Biden administration.”

As a part of a summer reading list in August, the National Education Association recommended students read “Why We Fly” by Kimberly Jones and Gilly Segal, a book that describes two girls who kneel for the national anthem. The book explicitly talks about marijuana use and is paired with discussion questions on activism.

In September, an Ohio chapter of the National Education Association provided Hilliard City Schools in Columbus, Ohio, with LGBTQ ally badges that featured a flag with the words “I’m Here.” The badges were for educators to wear in order to show their support for the LGBTQ community.

“The way that they’re bringing this in is through an inclusive, safe environment, you know, the mental health aspect,” Zorc told the DCNF. “‘If our kids don’t feel safe, then they’re not going to be able to learn so we have to fix that because that helps us improve the quality of academics if our kids are feeling more safe at school.’ When I look at this, it’s hard to separate. It’s not one group of LGBTQ teachers. It’s not one group that’s wanting the Critical Race Theory ideologies. It’s really coming from that Democratic teacher union leadership like these Randi Weingartens and people like that.”

Weingarten is the president of the American Federation of Teachers.

The New Jersey National Education Association ran an ad ahead of the 2022-2023 school year that depicted parents who speak out against gender identity and CRT as “extremists.” The ad cites two articles, one describing groups working to remove books featuring LGBTQ and CRT imagery from school libraries and the other discussing a New Jersey state senator’s bill which prohibits lessons on gender identity for kindergarten through sixth grade.

About a year ago, the National School Boards Association sent a letter to the Biden administration comparing parents at school board meetings to “domestic terrorists.” Attorney General Merrick Garland called on the FBI to “use its authority” on the parents who disrupt school board meetings and pose a threat.

“The current administration actions also show they are on board with making politics and ideologies the priority in the classrooms,” Parents Defending Education Director of Community Engagement Mailyn Salabarria told the DCNF, “instead of addressing the historically low proficiency scores of our students and the learning loss they’ll suffer for generations to come. And this has emboldened teachers unions and activist teachers to push for even more ideology instead of the basics of academic instruction.” 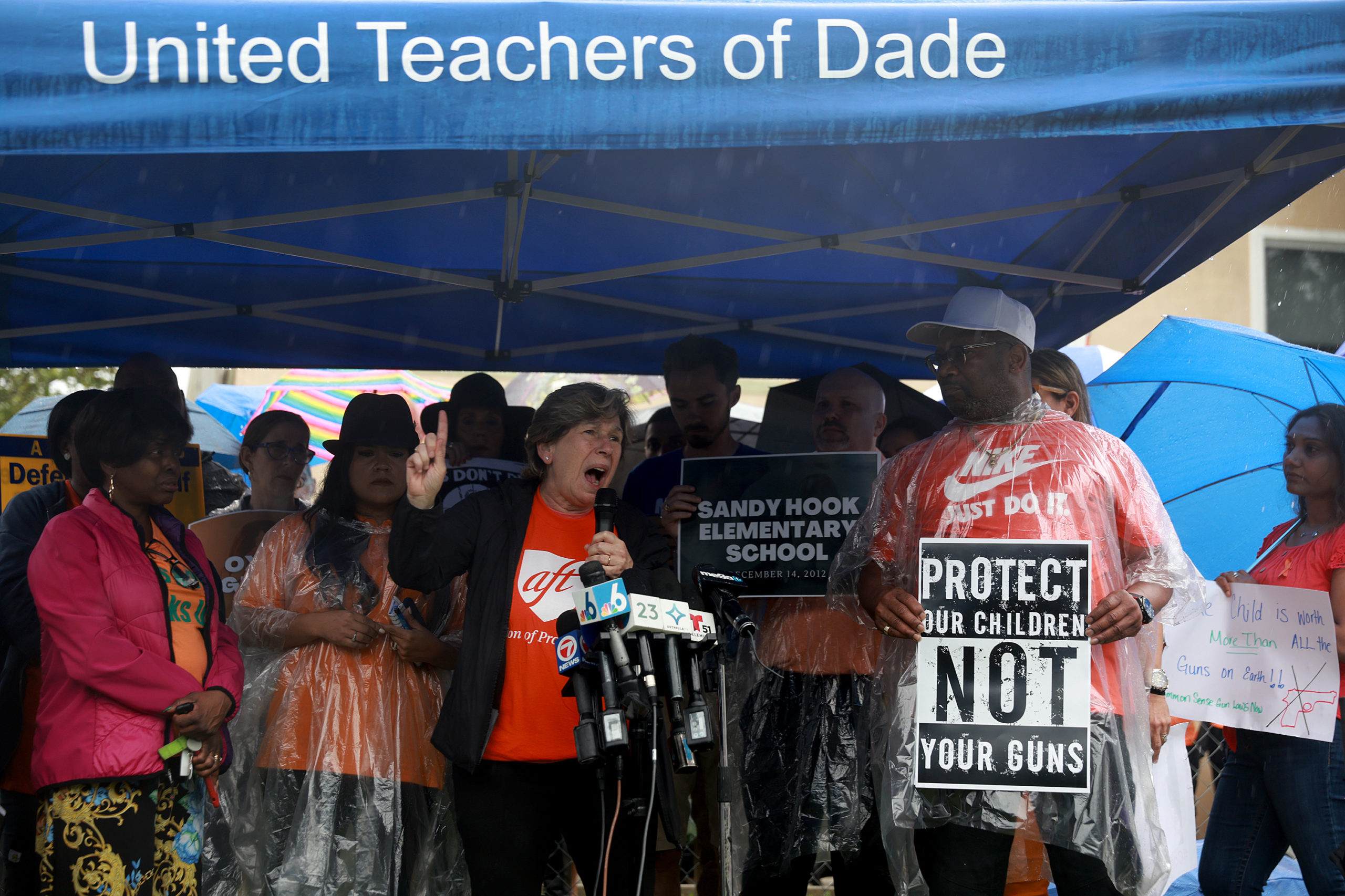 Randi Weingarten, president of the American Federation of Teachers, speaks during a protest near the office of Sen. Marco Rubio (R-FL) to ask him to work on gun-safety legislation on June 03, 2022 in Miami, Florida. (Photo by Joe Raedle/Getty Images)

Ahead of the 2022-2023 school year, the Department of Education (DOE) called for action to address a nationwide teacher shortage. The DOE announced partnerships with schools across the country to address the problem they say was brought on during the pandemic.

“They’re saying that we have a teacher shortage,” Zorc told the DCNF. “We do not have a teacher shortage. Teachers are moving to other environments where they’re not forced to teach this stuff. So when it comes to Critical Race Theory, when it comes to this gender ideology, it is really being spearheaded from the top down. That’s why we’re seeing this massive exodus of our public school teachers, because they were waiting on retirement, but a lot of them are like, ‘I cannot even I can’t do this anymore.’”

The push from the teachers unions for CRT and gender identity curricula comes as students across the nation post record learning losses; K-12 reading levels have dropped to where they were in 1990, the largest ever drop in the scores, while math levels saw their first ever decline.

“Teachers unions are certainly embracing ‘wokeness’ and showing their true self: their actions show they don’t care about the academic success of our kids, they only care about money and furthering their own political ambitions,” Salabarria told the DCNF.

The National Education Association, American Federation of Teachers and the DOE did not immediately respond to the Daily Caller News Foundation’s request for comment. An Indiana teacher released a viral video this week giving riveting testimony about her dismissal from a public school because of her activism efforts against left-wing educational schemes.

“My name is Jennifer, and I am a public school teacher who is also the founder of Purple for Parents Indiana,” she said. “I started Purple for Parents here to expose the truth about Red for Ed, the NEA and the radical agenda behind it.”

She believes that the National Education Association (NEA) is involved in a scheme to not only elect Democrats, but also indoctrinate and brainwash young minds through a sneaky overhaul of the curriculum in public schools.

“One of these hot topic issues is a push to change school culture through social emotional learning programs,” she explained.

“My school is currently in the third year of its SEL program called ‘Leader in Me.’ It is used to educate what they call the whole child through language manipulation, role playing, and influence of morals and values. As a teacher and a parent, I find this program to be very disturbing because these things should be taught by parents,” she said.

Jennifer said she was fired last Friday from her school as a result of exposing this agenda, based on a Facebook post she made the previous Monday exposing the agenda. Jennifer said that the school claimed she was “making them look bad” and being “untruthful” with her post.

“I want everyone to know that everything that I said was the truth. I believe parents should be aware of what’s going on, and my concern is truly because I care about children and parental rights,” she said.

Jennifer’s main concern with the SEL program is that it is being administered without parental consent, and parents have no ability to opt their children out.

“After being fired for speaking the truth, I immediately realized I can no longer trust the school to care fairly for my daughter, and I immediately unenrolled her,” she said. “I am deeply worried about what is going on in the public schools, and the measures that they will take to silence the truth.”

Jennifer had to choke back tears in the video when recalling how she was fired without being able to say goodbye to the students she cared for so much.

“I am an extremely hard-worker who is always kind and professional. It hurts me that I had to leave without saying goodbye to my students, and I have no idea what reason they will give for my absence,” she said.

Jennifer urged people to share her video to help raise awareness of what is going on in the school system, as leftists become more bold in their exploitation of the youth.

Her entire video address can be seen here:

IF VIDEO DOES NOT APPEAR, HERE IS THE URL: https://youtu.be/IGFOrQhTmVg

Educational experts refer to SEL programs as “government-sponsored personality manipulation” and note how they cannot be tested for effectiveness due to their total subjectivity. While Education Secretary Betsy Devos claims that Common Core is dead, the underlying principles behind the standards remain firmly in place. Exposing the agenda can have serious consequences.

…Says Laws are A “License to Discriminate”

The National Education Association’s annual representative assembly, meeting this week in Orlando, will vote on Friday or Saturday to take a stand against religious freedom in America.

It’s just the latest in radical leftist political action by the nation’s largest union with approximately 3 million members. In many states, teachers are compelled to join the union in order to hold a job, so the NEA is already well acquainted with strong-arm tactics.

New Business Item A, submitted by the NEA Board of Directors itself, states:

“The NEA will develop educational materials for its state affiliates and members about the potential dangers of so-called ‘religious freedom restoration acts’ or RFRAs, which may license individuals and corporations to discriminate on the theory that their religious beliefs require such actions.

The materials will describe the current legal landscape at the federal and state level, provide model state legislative amendments to modify existing laws to prevent such discriminatory applications, provide talking points for advocacy, and link to existing resources for members and state affiliates to use in efforts to prevent the use of such laws as a license to discriminate.”

An accompanying rationale repeats the charge that First Amendment freedoms are a “license to discriminate,” and that this resolution is part of NEA’s efforts on “social justice.” It was submitted by a Michigan delegate, Paula Herbart, who can be contacted at pherbart@mea.org

ACTION: Call your local school and leave this message: ” I am stunned and heartbroken that the National Education Association believes Americans don’t deserve religious freedom, and that we should be compelled to violate our consciences. How tragic that the millions of dollars in teachers’ dues are funding such anti-American, fascist policies here on Independence Day week-end. I suggest all of the teachers at our school disaffiliate from this destructive organization.”

And be sure to tell all the teachers and parents you know.