Trump received 1,871,515 total votes in the Texas Republican primary on Tuesday, with 99.5 percent of the vote reporting. That’s more than the top four remaining Democrats combined, as currently former Vice President Joe Biden, Sen. Bernie Sanders, Michael Bloomberg, and Elizabeth Warren have earned a total of 1.7 million votes in Texas, with 91.3 percent of the vote reporting, although the Democrat votes are still being counted.

Trump received the most votes ever for an incumbent president running in Texas.

Texan Republicans did have a Senate primary in the state in 2020, but Sen. John Cornyn was the easy winner with 74 percent of the vote.

Former New York City Mayor, Michael Bloomberg is obviously back in the news again after his recent declaration that he is joining the rest of the crowded Democratic field and running for president in the upcoming election.

It’s already looking bad for the billionaire for a number of reasons, one of them being that he’s a billionaire and liberals hate billionaires…well, in theory anyway. But the thing is that liberals will make the same statement about Bloomberg that we’ve made about Trump and even Democrats have said the same thing, “He can’t be bought.”

Another reason is that he is a tyrant who wants to limit your freedoms. The guy doesn’t even want to let you drink soda or use plastic straws.

Just when you think he couldn’t be any more of an elitist or any more arrogant, he goes on to say something completely absurd.

But recently Bloomberg has found himself in an uncomfortable situation after something he said back in 2014 resurfaced.

Bloomberg said, “I am telling you if there is a God, when I get to heaven I’m not stopping to be interviewed. I am heading straight in. I have earned my place in heaven. It’s not even close.”

First of all, he doesn’t even believe in God. Notice he said, “if there is a God…” This demonstrates that he has nothing to base his claim off of because he doesn’t even know what God requires. There isn’t some large cosmic scale in the sky where you put all your good deeds on one side and all your bad on the other.

I hate to break it to Judge Judy, but Bloomberg isn’t going to be the savior of the United States that she thinks he is. Liberals are the only ones dividing this country right now by refusing to accept anything besides 100% compliance with their wants. 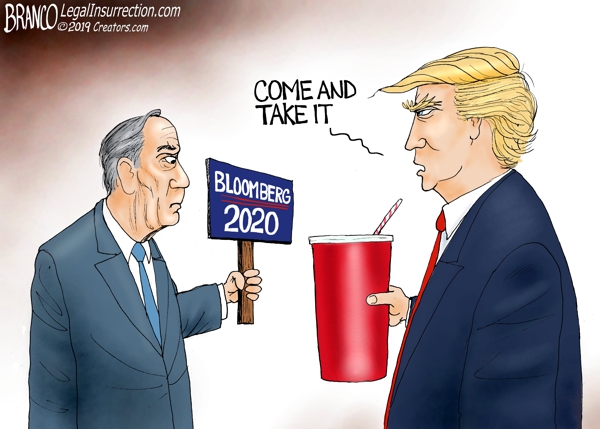 Nanny President – Hold on to your Big Gulp folks, A Nanny Bloomberg Presidency could be just as bad as a Hillary or Bernie presidency.

“This spring, it has been disturbing to see a number of college commencement speakers withdraw — or have their invitations rescinded — after protests from students and — to me, shockingly — from senior faculty and administrators who should know better,” Bloomberg said.

The billionaire former mayor cited an October speech during which his ex-police commissioner, Ray Kelly, was shouted down by students at Brown University. The university canceled Kelly’s speech when protesters opposed to the police department’s stop-and-frisk policy shouted down and interrupted Kelly.

Bloomberg noted other universities have had speakers back out. He pointed to Rutgers, where former U.S. Secretary of State Condoleezza Rice withdrew amid protests, and Smith College, where International Monetary Fund chief Christine Lagarde withdrew after a student petition.

“In each case, liberals silenced a voice — and denied an honorary degree — to individuals they deemed politically objectionable. This is an outrage,” Bloomberg said to applause.

An even more glaring example of failing to listen to the opposing side, Bloomberg said, was the longstanding impasse between Republicans and Democrats in Washington, where every major question facing the nation is decided “not by engaging with one another but by trying to shout each other down.”

Bloomberg, who in April pledged $50 million to gun control groups he helped organize, spoke about Washington politicians’ handling of gun issues, noting Congress has barred the national Centers for Disease Control and Prevention from conducting studies of gun violence, a prohibition that was recently extended to the National Institute of Health.

“What are they afraid of?” he asked.

“Do you really want an answer Mr. Bloomberg, or is all this a prelude to your campaigning for President? If in fact you really want an answer, I’ll give you my perspective; Unless you’re a “die-hard” Liberal Leftist, the very idea of the national Centers for Disease Control and Prevention conducting research about gun violence screams bias. The Leftist/Marxist/Socialist tyrannical force has already determined the outcome of that study. All they want is to get their deceptive hands on the money to do the research. You see, Mr. Bloomberg, most of America is smarter than you and your Leftist comrades think we are. Any more questions?” JB

The Senate this year delayed a vote on President Obama’s nominee for surgeon general, Dr. Vivek Murthy, because the Harvard physician “had the audacity to say gun violence is a public health crisis that should be tackled,” Bloomberg said to applause.

“Let’s get serious: When 85 Americans are killed with guns every single day, and shootings regularly occur at our schools and universities, including last week’s tragedy at Santa Barbara, it would be almost medical malpractice to say anything else,” Bloomberg said.

“Mr. Bloomberg sir? Please show us the FACTS that back up your quote of 85 Americans being killed with guns everyday?” JB

The former mayor, who received honorary degrees from Harvard along with seven others — including former President George H.W. Bush and music icon Aretha Franklin — spoke of the role of universities as places where people of all backgrounds and beliefs can freely debate ideas without that “sacred trust” being threatened by the “tyrannical tendencies of monarchs, mobs and majorities.”

He recalled when protesters came out several years ago against the development of a mosque a few blocks from ground zero in lower Manhattan.

“We protected their right to protest,” Bloomberg said. “But they could not have been more wrong. And we refused to cave in to their demands. The idea that government would single out a particular religion, and block its believers — and only its believers — from building a house of worship in a particular area is diametrically opposed to the moral principles that gave rise to our great nation, and the constitutional protections that have sustained it.”

“BECAUSE IT IS AN INSULT TO EVERY PERSON THAT WERE MURDERED THAT DAY, AS WELL AS THEIR GREIVING FAMILY MEMBERS. Islam ALWAYS erects a Mosque on, or near the grounds of any of their conquest. THAT’S WHY, sir!” JB

He added, “If you want the freedom to worship as you wish, to speak as you wish, and to marry whom you wish, you must tolerate my freedom to do so — or not do so — too. What I do may offend you. You may find my actions immoral or unjust. But attempting to restrict my freedoms in ways that you would not restrict your own leads only to injustice.”

“There is hope for you yet, or is that the last smoldering vestiges of your one time conservative beliefs?” JB

Bloomberg compared the intolerance of ideas prevalent in the country today to “McCarthy’s Red Scare” in the 1950s and its destruction of thousands of lives. In the 2012 presidential race, he said, the overwhelming majority of campaign contributions from Ivy League faculty went to Barack Obama.

“Today, on many college campuses, it is liberals trying to repress conservative ideas, even as conservative faculty members are at risk of becoming an endangered species,” he said. (“AGREED!” JB)

After the speech, Sarah Surrain, who completed her master’s degree in education, said Bloomberg was bold to criticize universities as too liberal.

“I thought it was really thoughtful,” she said of the speech. “It was nice that it wasn’t just platitudes.”

Harvard Law School graduate Jared Nicholson said the speech was “a great message … about tolerance of different ideas and diversity of opinions.”

“He gave some interesting perspectives on conservative views in universities that I hadn’t heard before coming from a liberal undergraduate institution myself,” he said. “It was eye-opening for a lot of people.”

Before the speech, Cary Williams, president of the Association of Black Harvard Women, questioned why Bloomberg was selected as speaker, because, she said, the NYPD’s stop-and-frisk program “disproportionately has targeted people of color in New York.”

“It’s basically racial profiling,” junior Keyanna Wigglesworth said of the New York policing policy under Bloomberg. “And so it’s unsettling to me, (for) someone to speak who advocates a racist policy when you want students of color on campus to feel comfortable. It’s confusing and I don’t think its what Harvard stands for.”

CNN’s Laura Dolan and Dana Garrett contributed to this report

If you are looking for an example of delusional people who have no idea Who God is, Who His Son, Our Savior is, or God’s expressed entrance requirements to enter His Heaven, you have found that example in this simple minded man, Former New York Mayor Michael Bloomberg.

Former New York Mayor Michael Bloomberg admits he’s started feeling his own mortality – but insists that if there is a God, he is going straight to heaven.

The reason for his free pass from the big man upstairs is that he’s done enough on earth to deserve his place up there while fighting for gun control, smoking bans, and drink restrictions, as well as against fattening foods, according to The New York Times.

“I am telling you, if there is a God, when I get to heaven I’m not stopping to be interviewed,” Bloomberg told the Times. “I am heading straight in. I have earned my place in heaven. It’s not even close.”

(Ephesians 2:1-9; 1 As for you, you were dead in your transgressions and sins, 2 in which you used to live when you followed the ways of this world and of the ruler of the kingdom of the air, the spirit who is now at work in those who are disobedient. 3 All of us also lived among them at one time, gratifying the cravings of our sinful nature and following its desires and thoughts. Like the rest, we were by nature objects of wrath. 4 But because of his great love for us, God, who is rich in mercy, 5 made us alive with Christ even when we were dead in transgressions-it is by grace you have been saved. 6 And God raised us up with Christ and seated us with him in the heavenly realms in Christ Jesus, 7 in order that in the coming ages he might show the incomparable riches of his grace, expressed in his kindness to us in Christ Jesus. 8 For it is by grace you have been saved, through faith-and this not from yourselves, it is the gift of God- 9 not by works, so that no one can boast. (NIV)

Bloomberg, 72, started thinking about how long he has left in this world while preparing for his upcoming 50th college reunion, and was shocked to learn how many of his former classmates had been appearing in the “in memoriam” pages of his school newsletter.

During his tenure, Bloomberg became known for attempting to run a “nanny state” in New York due to his many initiatives to help get overweight New Yorkers in shape.

Last year, he proposed legislation that would have encouraged city residents to forgo elevators and escalators and use the stairs. His get-fit measure followed his previous assault on smoking in public places and his battles against the consumption of oversize sodas, sodium, and trans fats.