Sen. Ted Cruz, Texas Attorney General Ken Paxton, and the attorneys general from 17 additional states should all be disbarred, according to the reasoning of the disciplinary complaint the State Bar of California filed Thursday against former Trump campaign attorney John Eastman. That detail is one of many buried in the 35-page, 11-count disciplinary complaint made public yesterday in the latest lawfare attack on attorneys who deigned to represent Donald Trump.

State Bar of California’s Chief Trial Counsel George Cardona announced on Thursday the filing of disciplinary charges against Eastman, allegedly arising from Eastman’s engagement “in a course of conduct to plan, promote, and assist then-President Trump in executing a strategy, unsupported by facts or law, to overturn the legitimate results of the 2020 presidential election by obstructing the count of electoral votes of certain states.” The press release announcing the disciplinary charges further claimed that Eastman “made false and misleading statements regarding purported election fraud,” that provoked a crowd into assaulting and breaching the Capitol on Jan. 6, 2021.

The 11 charges against Eastman prove troubling throughout, with the State Bar of California proposing to discipline Eastman for presenting legal analyses to his client, Trump, and for speaking publicly on his views about the election, with the bar even attempting to hold Eastman responsible any violence that occurred on Jan. 6. The disciplinary complaint also misrepresents numerous arguments Eastman and others made concerning the 2020 election, falsely equating claims of violations of election law with fraud.

But it is count two of the disciplinary complaint, charging Eastman with “seeking to mislead a court,” that exposes the California State Bar as a kangaroo court.

“On or about December 7, 2020, the State of Texas filed a Motion for Leave to File Bill of Complaint in the United States Supreme Court, initiating the lawsuit Texas v. Pennsylvania,” begins count two of the complaint against Eastman. The complaint then explains that in that lawsuit, Texas argued the defendant states of Pennsylvania, Georgia, Michigan, and Wisconsin “usurp[ed] their legislatures’ authority and unconstitutionally revised their States’ election statutes.” As a remedy, Texas sought an order from the Supreme Court to “enjoin the use of unlawful election results without review and ratification by the Defendant States’ legislatures and remand to the Defendant States’ respective legislatures to appoint Presidential Electors in a manner consistent with the Electors Clause.”

Eastman, on behalf of then-President Trump, sought to intervene in the Texas v. Pennsylvania case, and in that motion, Eastman “expressly adopted the allegations contained in the Motion for Leave to File Bill of Complaint filed by Texas.” In adopting the allegations Texas made, Eastman, according to the California State Bar, “misl[ed] the Supreme Court by an artifice or false statement of fact or law,” in violation of California’s “Business and Professions Code” that governs attorneys’ conduct in the Golden State.

Under the California State Bar’s reasoning, then, Texas’ attorney general who filed the motion likewise “misled” the U.S. Supreme Court, as did the attorneys general of the 17 other states that supported Texas’ motion for leave to file a bill of complaint. So too would have Sen. Ted Cruz, had the Supreme Court agreed to hear the motion, as he had agreed to argue the case on Trump’s behalf in that circumstance.

While count two represents but one of the 11 distinct charges levied against Eastman, it most clearly exposes the logical conclusion reached when state bars use disciplinary proceedings to conduct lawfare against political opponents.

To date, the bars have limited themselves to targeting just a few attorneys working for Trump, with the D.C. Bar pursuing Rudy Giuliani and Jeff Clark, in addition to the California State Bar’s attack on Eastman. But there is no limiting principle to prevent the bars in other states from pursuing any politician with a law license who happens to represent the wrong person.

That is an extremely dangerous precedent, which is why tomorrow at a press conference called by Eastman’s legal team, some big legal names will condemn the move. The hastily called conference is expected to bring together former U.S. Attorney General Edwin Meese III and John Yoo, a current professor of law at the University of California-Berkley, former general counsel to the U.S. Senate Judiciary Committee, and former deputy assistant attorney general. Former Wisconsin Supreme Court Justice Michael Gableman and former California Supreme Court Justice Janice Rogers Brown, among others, are also expected at the conference.

Whether the legacy media will cover Eastman’s detailed response to the State Bar of California’s disciplinary complaint or bother to report on his press conference remains to be seen. But if Cruz and the attorneys general impugned by the California State Bar speak out, the corrupt press may not have any choice but to report on the ridiculous theories underlying the disciplinary attacks on Eastman.

Margot Cleveland is The Federalist’s senior legal correspondent. She is also a contributor to National Review Online, the Washington Examiner, Aleteia, and Townhall.com, and has been published in the Wall Street Journal and USA Today. Cleveland is a lawyer and a graduate of the Notre Dame Law School, where she earned the Hoynes Prize—the law school’s highest honor. She later served for nearly 25 years as a permanent law clerk for a federal appellate judge on the Seventh Circuit Court of Appeals. Cleveland is a former full-time university faculty member and now teaches as an adjunct from time to time. As a stay-at-home homeschooling mom of a young son with cystic fibrosis, Cleveland frequently writes on cultural issues related to parenting and special-needs children. Cleveland is on Twitter at @ProfMJCleveland. The views expressed here are those of Cleveland in her private capacity.

“This radically pro-transgender legal advisory appears to encourage school districts to refrain from reporting child abuse and obscure information regarding children exhibiting gender dysphoria from their parents,” the four congressmen stated. “This document also makes a bold declaration that says young girls would have no law protecting them from having a school district permit a biological male to enter their restroom or locker room.

The TASB legal advice is “highly concerning” as it “may be effectively creating state policy,” they said.

The representatives want Paxton to inspect the new school board procedures and offer “further guidance” on issues regarding transgender students.

The school board association said that having a transgender child use separate gender-neutral facilities could make some students “feel that such an arrangement negatively singles them out and isolates them from their peers,” according to the document.

The decision on whether students should play on sex-specific sports teams is in murky waters, according to the TASB letter. Despite Texas law requiring students to play on teams separated by their biological birth, TASB advises school districts to “assess each request individually and determine the best course of action based on a thorough evaluation of all of the issues and potential risks, and in consultation with the district’s attorney.”

TASB also counseled schools on the legality behind preventing unsupportive parents from knowing about their child’s gender dysphoria and choosing a different name or pronoun.

“Texas educators typically work with parents to decide on appropriate accommodations for transgender students. Nonetheless, it is important to keep in mind that transgender students are at particular risk of harm, including self-harm, when a parent disagrees with the student’s gender identity,” the document stated.

“As such, a student may request that a district employee not tell his or her parent about the student’s gender identity. School officials should proceed with caution in this case, in accordance with district policy regarding student counseling, crisis intervention, and child abuse,” TASB added. 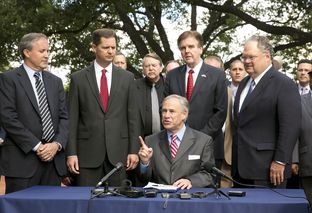 Gov. Greg Abbott, who signed a bill Thursday that allows clergy members to refuse to conduct marriages that violate their beliefs, said that “pastors now have the freedom to exercise their First Amendment rights.”

The signing ceremony for the so-called Pastor Protection Act, which goes into effect Sept. 1, was held outside the Governor’s Mansion. Abbott was surrounded by about two dozen clergy members at a news conference discussing the law. Others attending the signing ceremony included Lt. Gov. Dan Patrick, Attorney General Ken Paxton and Sen. Craig Estes, R-Wichita Falls, who authored the bill.

“Freedom of religion is the most sacred of our rights and our freedom to worship is secured by the Constitution,” Abbott said. “Religious leaders in the state of Texas must be absolutely secure in the knowledge that religious freedom is beyond the reach of government or coercion by the courts.”

With the signing of the bill, “Texas took a small but important step to further protect the religious freedom of clergy in the face of increasing hostility toward people of faith in all walks of life,” Paxton said in a statement. “No Pastor, Priest, Rabbi or other religious leader should be forced to perform or recognize a marriage that contradicts his or her sincere religious belief.”

Estes has said the bill is about protecting pastors “who have a strong religious belief “ against same-sex marriage.

State Rep. Celia Israel, D-Austin, said in a statement released Thursday that she believes it’s possible to support both equality and religious liberty.  “Texans are ready for equality, and if this measure gives pastors a peace of mind, I welcome it becoming law,” Israel said.

Critics had argued that Senate Bill 2065 attempts to make it difficult for same-sex couples to marry in Texas, in case the U.S. Supreme Court legalizes gay marriages.