All the Mainstream media can talk about is how Trump is politicizing Independence day while they politicize the 4th and everything else 24/7. 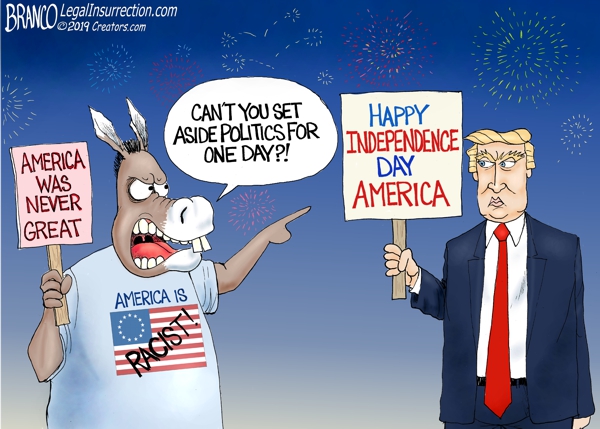 Nike shoe company has pulled its Betsy Ross flag shoe because of a washed-up ex-football player felt it was racist. Maybe it’s a shoe better fitted for Antifa. 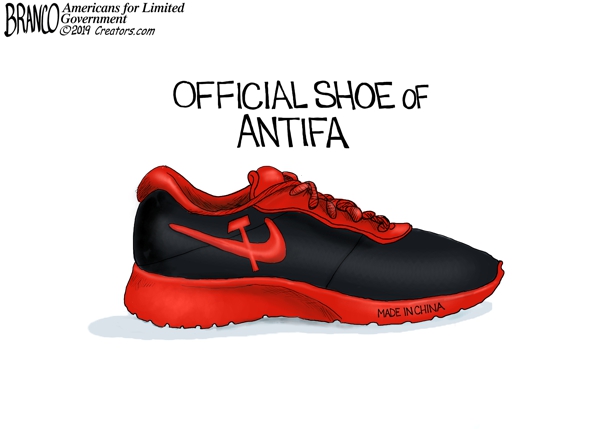 Iran continues to test Trump’s patients and though he has so far refused to take the bait, the media tries to blame him.

“That’s what they are,” Myers told me in a telephone interview on Friday. “I think they’ve amply demonstrated it is accurate.”

And he also doesn’t like The Morris North Star, a conservative student publication that routinely draws the ire of liberals at the University Minnesota at Morris.

After the professor’s diatribe was published, approximately 350 copies of The North Star were stolen from campus distribution bins, the Alliance Defending Freedom alleges. They estimate the theft cost the newspaper $1,750.

“I said it was a terrible, terrible paper and they university should not be endorsing it,” Myers said.

But attorneys for the student newspaper are alleging Myers broke the law when they say he wrote a blog post on his personal blog urging people to throw away the publication.

The Alliance Defending Freedom has accused Myers, an associate professor in the school’s biology program, of encouraging people to steal and throw away a copy of the November 22nd edition of the newspaper.

That particular edition included a satire on affirmative action. The professor said the paper was mocking minority students.

“I would advocate the disposal of their flyers if the Ku Klux Klan started papering our campus, and likewise, the North Star has worn out its welcome and must go,” the professor wrote. “Treat their scattered papers as hate-filled trash and dispose of it appropriately.”

Myers went on to call the student editors of the publication “wingnutty” and even took a swipe at Fox News.

“We do have conservative students here – I expect that the majority are more conservative than I am – but they also trend towards being more the reasonable, rational, educate sort of conservative,” he wrote. “Not the kind you’ll see on Fox News, and most unfortunately, not the kind who are likely to get elected to the Republican party.”

After the professor’s diatribe was published, approximately 350 copies of The North Star were stolen from campus distribution bins, the Alliance Defending Freedom alleges. They estimate the theft cost the newspaper $1,750.

Myers told me he had nothing to do with the disappearance of the newspapers.

“I suggested the university needed to get rid of them,” he said. “I have done absolutely nothing to squelch their ability to publish their terrible little rag.”

And last January, The North Star published an issue that included a pro-life story. As many as 100 copies of the newspaper were later found defaced.

The newspaper staff contacted university officials about both incidents –but so far – the university has remained silent.

ADF attorney Kevin Theriot is calling on the university to not only condemn the theft and destruction, but also investigate the incidents.

“The university must take steps to protect The North Star and all other student publications from such viewpoint-based censorship in the future,” Theriot said in a prepared statement.

Theriot also had some choice words to say about Professor Myers.

“Professor Myers has betrayed that public trust by his advocacy of censorship,” he said, accusing the professor of chilling free speech by “advocating that people steal the paper and throw it in the trash.”

For the record, no one has been charged with a crime. And the university sent me a two-sentence statement saying they were reviewing ADF’s claims and “will respond in due course.”

ADF said the most troubling aspect of the incident is UMM’s silence.

“A public university is supposed to be a marketplace of ideas, where free thought and discourse flourish,” ADF wrote in a letter to the university. “By failing to take swift action to denounce the theft and defacing of a newspaper, UMM is teaching students that the appropriate response to ideas you disagree with is to censor or destroy those ideas.”

One would think that a university campus would be a bit more tolerant of opposing viewpoints. It’s not much of a stretch to imagine UMM professors advocating for an old-fashioned book burning. They could use a copy of the First Amendment as fire starter.

ADF said Professor Myers may express his opinion about the newspaper. However, the First, Fourth and Fourteenth Amendments do not protect government officials when they incite illegal activity, “engage in viewpoint discrimination, confiscate property without notice, and seize The North Star’s property.”

Perhaps Professor Myers should remember that – the next time he decides to open his orifice.

Todd Starnes is host of Fox News & Commentary, heard on hundreds of radio stations. Sign up for his American Dispatch newsletter, be sure to join his Facebook page, and follow him on Twitter. His latest book is “God Less America”.

Wake Up America. This Type of Persecution is Growing Strength Here

The National Front chief risks being put on trial after members of the European Parliament’s judicial committee in Brussels voted to lift her legal immunity as an MEP.

Ms Le Pen sparked uproar among in France after a speech at a party rally in December 2012 when she denounced Muslims praying in the street in areas where there are no mosques.

France has a population of around five million Muslims, the highest of any European country.

‘There are no armoured vehicles, no soldiers, but it is an occupation all the same and it weighs on people.’

French prosecutors asked the EU last November to lift the her immunity as a lawmaker so she could be prosecuted for inciting racial hatred.

The European Parliament’s legal committee voted overwhelmingly yesterday that Le Pen could be charged and the full parliament is now expected to formally lift her protection in the coming weeks.

‘I, along with many other MEPs, today voted to drop Ms Le Pen’s immunity and I am confident that the majority of the European Parliament will follow our lead in July.’

A woman wears a burqa as she walks on a street in Saint-Denis, near Paris in 2010: France has a population of around five million Muslims, the highest of any European country

Le Pen, 47, is renowned for her outspoken views on immigration – but is also riding on a wave of popular support and would come second in another presidential election.

Last year she tried to prosecute pop star Madonna for screening an image of her with a Swastika on her head at a Paris concert.

She also recently had a news photographer banned from taking any more pictures of her – because he makes her look ‘ugly’.

Her father and former National Front leader Jean-Marie Le Pen was stripped of his legal protection as an MEP to face charges of holocaust denial in 1998.