The Democratic primary presidential debate was nothing more than a competition for who’s the best Marxist Santa Clause. Merry Marxism! Where everything is free but you! 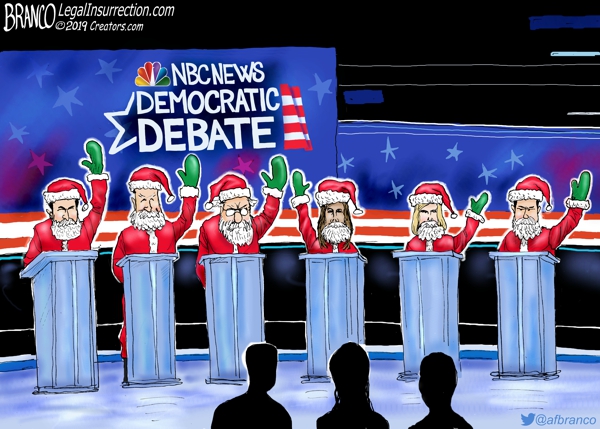 Authored by Tami Jackson | on February 12, 2018 at 5:12 pm | https://comicallyincorrect.com/bet-im-voting-democrat-want-free-stuff-see/ 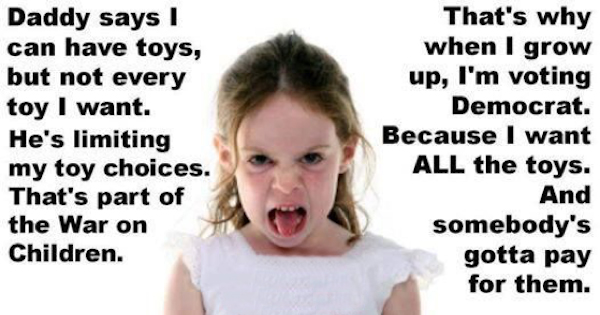 Worldview is a very big deal: each of us has a worldview, the lens through which we see the world. Our parents and grandparents, our teachers, our friends — they all contribute to the formation of our worldview.

As for me, I had conservative parents who taught me to think critically at a very young age. I had conservative, immigrant grandparents, teaching me to work hard and well from a young age. And on my own, I discovered the wonderful radio broadcasts of some fellow that made terrific sense. Mom caught me in my room, at age ten, listening and laughing at his great humor and wisdom.

Mom asked, “Tami, who in the world are you listening to?’

I responded with a smile, “Mom, this is some guy name Ronald Reagan and he’s GREAT! You guys would like him!”

Mom and Dad both laughed at that. Dad slapped me on the back and said, “That’s my girl!”

So you’ll excuse me for saying this, but I have no time for whiny babies with a big case of victim mentality who want lots of stuff without lots of hard work. Case in point. When I was a junior in college, and a French major, I was nearly fluent and the Dean of the French department told my father that IF I could live in Paris for three months I would be indiscernible from a native speaker. I promptly asked Dad if I could study in Paris for a term.

“Are you NUTS?! Your mother and I don’t go to France and I have a job and make good money. You need to finish school, get a job, and earn your own way to Europe.”

That was a glass of cold water on my plans, a dose of reality. I did manage to go to Guatemala as an interpreter for a short term mission: that trip only cost the folks $100 and I was doing some good.

But these young Lefties who decry Capitalism and whimper “Boo hoo! Capitalism is EVIL!! And don’t let any of those nasty conservatives near me and … oh wait. I’ll rant more after I recharge my iPhone at Starbucks” — I have zero patience for that.

The Dems are mostly big proponents of zero population growth — old Al Gore has convinced everyone we are the enemy of the planet. Consequently, Lefties are not breeding enough to replace their electorate.

First make sure the Gen-X and Gen-Z and Millennials are brainwashed with government school propaganda, which is essentially radical social experimentation and has nothing whatsoever to do with a classical education. Second, import an electorate, and what better group than any and all illegal aliens, preferably illegals who do not speak English and will readily believe every lie The Left tells them.

What we all know is that rewarded behavior is repeated, punished behavior typically is discontinued.

People that make it to America by any means possible — any means but legal channels that is — are quickly snatched up by Leftie do-gooders and told, in their language, where to find food and shelter, how to keep getting free food, free phones, free health care.

Dad used to tell me, “It’s a sin to give someone something for nothing.” Oh, he didn’t mean that we would never have birthday or Christmas presents, though even those were reasonable and modest. My father meant that it was wrong to have, or to foster in others, an entitlement mentality.

I tell folks, “God’s grace is free, everything else you better work hard for!”

So when I see a meme like this it brings all these emotions back, flooding my mind.

I’m not a violent person (though I am trained and do conceal carry, so don’t test that theory), but I just want to slap the person who has nothing good to say about my beloved country, America, and then turns around and moans and groans and wants more free stuff. These idiots have no understanding of basic economics: there is NO FREE STUFF! Someone always pays.

What they mean is, “I want free stuff. Let someone else pay.”

And that, my dear friends, is immoral. That’s also the Democrat mantra. Here in the United States of America we are all free to work hard and better ourselves. We LEGAL citizens are constitutionally guaranteed the right to “life, liberty, and the pursuit of happiness.”

Beyond that? Get off your backside and work and stop complaining. #NoFreeStuff

Too lazy to stand in line to get their welfare checks!

Now, don’t tell me that welfare recipients aren’t innovative! No reason to stand on your feet waiting to get your check. Just put your flip-flops next in line and go back and sit on your ass and play games on your free government issued cell phone! What a great country!

ARE WE THE DUMBEST NATION ON THE PLANET OR WHAT??

I AM PUBLISHING THIS EMAIL THAT I RECEIVED TODAY TO ALL THE “THINKERS” . IT REFLECTS THE FEELINGS OF A LOT OF PEOPLE.

I have never heard this said as simply or as well. Class war at its best.

Now understand this. All great democracies have committed financial suicide somewhere between 200 and 250 years after being founded. The reason?

A Nation of Sheep Breeds a Government of Wolves!

Culture: Constitution, and the Bill of Rights!

NO freebies to: Non-Citizens!