High Asian American turnout in races around the country could signal a mass exodus from the Democratic Party, much like what is occurring among Hispanics, CNN reported Sunday. The successful recall campaign against San Francisco District Attorney Chesa Boudin is one example, CNN Senior Data Reporter Harry Enten wrote, observing that Asian-Americans were a key factor in the vote. Boudin’s disapproval numbers were highest among Asian Americans and Hispanic voters prior to his recall. (RELATED: Asian Americans Are Helping Lead The Charge Against Woke School Boards)

Boudin was recalled with 55% of the vote, CNN reported.

“Asian American voters are sick and tired of Democrats hurting our families by causing the highest inflation in 40 years, defunding the police, and ending merit-based education,” RNC Spokesman and Director of Asian Pacific American Media Nainoa Johsens told The Daily Caller News Foundation. “From the election of Glenn Youngkin in Virginia to the recall of San Francisco’s Chesa Boudin, the numbers show that the AAPI community is leaving the Democrat Party behind in droves and the shift is only accelerating.”

“Joe Biden’s radical agenda is out of touch with Asian American voters and Republicans are poised for big gains because the GOP is on the ground months before November to listen to the AAPI community’s concerns and provide real solutions based on our shared conservative values,” Johsens said.

“That’s far greater than the drop he’s had with the electorate overall,” Enten added.

Some Republicans believe that reported discrimination against Asian Americans in academic admissions is one issue driving the shift. One notable case centers around Thomas Jefferson High School for Science and Technology in Fairfax County, Virginia, when the school board changed the admissions policy to pursue “equity.”

The Democratic National Committee did not immediately respond to a request for comment from The Daily Caller News Foundation.

With Democratic Sens. Joe Manchin of West Virginia and Kyrsten Sinema of Arizona refusing to eliminate the filibuster and pass a pair of election reform bills, Democratic politicians are claiming that Republicans will prevent fair midterm elections in November.

The two bills, the Freedom to Vote Act and the John Lewis Voting Rights Advancement Act, would effectively nationalize elections by preventing states and locales from setting limits on absentee ballots, prohibiting ballot harvesting and changing polling locations without federal approval, among other changes. Democrats claim that these changes are necessary to prevent local Republicans from engaging in voter suppression and throwing out validly cast ballots.

President Joe Biden cast opponents of the bills as the heirs of segregationists, and laws requiring voter ID and banning line-warming as “Jim Crow 2.0.” He also claimed that individuals who support the stricter ID standards “plan to subvert the election.”

“History has never been kind to those who’ve sided with voter suppression over voters’ rights, and it will be even less kind for those who side with election subversion,” the commander-in-chief said. “Do you want to be on the side of Dr. King or George Wallace? The side of John Lewis or Bull Connor? The side of Abraham Lincoln or Jefferson Davis?” he asked. 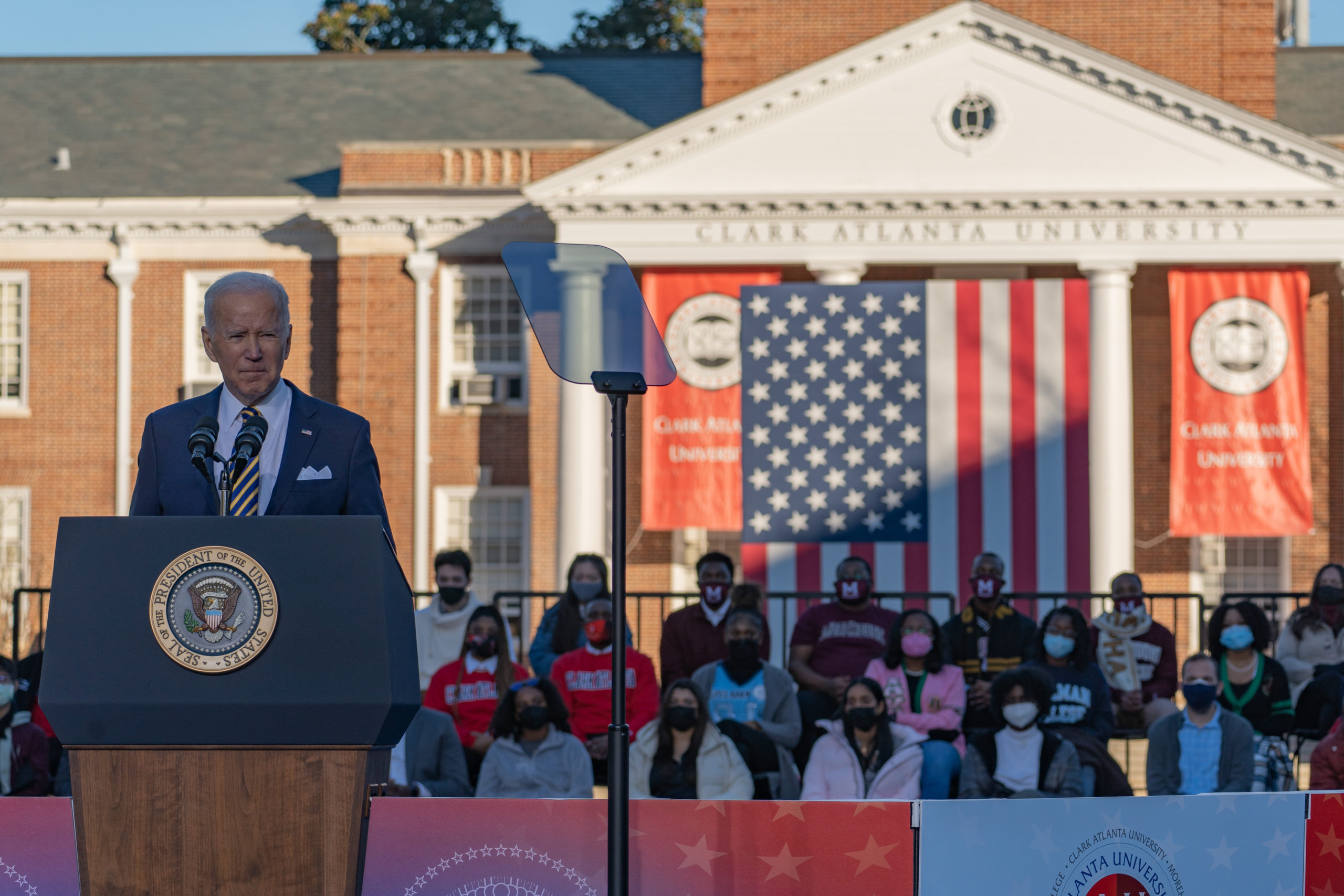 ATLANTA, GA – JANUARY 11: U.S. President Joe Biden speaks to a crowd at the Atlanta University Center Consortium, part of both Morehouse College and Clark Atlanta University on January 11, 2022 in Atlanta, Georgia. Biden and Vice President Kamala Harris delivered remarks on voting rights legislation. Georgia has been a focus point for voting legislation after the state voted Democratic for the first time in almost 30 years in the 2020 election. As a result, the Georgia House passed House Bill 531 to limit voting hours, drop boxes, and require a government ID when voting by mail. (Photo by Megan Varner/Getty Images)

“This is Jim Crow 2.0. That was one of the strongest points of the president’s speech that I agree with. So, this whole notion, when you walk around and no one has ever discriminated against you because of your skin color or you have never had to worry about having your vote counted, you can have those kinds of statements,” he said.

During her Martin Luther King Jr. Day address, Vice President Kamala Harris asserted that opponents of the legislation wish “to interfere with our elections, to get the outcomes they want and to discredit those they do not.”

Senate Majority Leader Chuck Schumer added that Republicans want to “rig the game and rig the count,” when it comes to elections, so a compromise position such as reforming the Electoral Count Act would be unacceptable to his caucus.

“If you’re going to rig the game and then say, ‘count the rigged game accurately,’ what good is that?” he asked during a Jan. 4 press conference.

Top Democrats have made these claims as polls and analysts suggest that Republicans are likely to take back the House and Senate by wide margins in the November midterms. A poll released Monday by Gallup found that Americans were more likely to support the Republican Party than the Democratic Party towards the end of 2021 than at any point since 1995, a year after the GOP netted 54 House and eight Senate seats.

Other polls have indicated that voters prefer generic Republican candidates to generic Democratic ones by as many as eight percentage points, with independents breaking sharply for Republicans.

Republicans need to pick up only five House seats and one Senate seat to win back both chambers, while the president’s party has on average lost 26 seats in the midterm elections conducted since the end of World War II, according to FiveThirtyEight. The only midterm elections in which the president’s party did not lose seats were 1998, as Republicans impeached former President Bill Clinton, and 2002, in the aftermath of the Sept. 11 terrorist attacks.

Many Democrats assailed Republicans for equally baseless claims about the 2020 elections, while saying that Americans should not question the security and fairness of elections.

After Republican Missouri Sen. Josh Hawley cited “allegations of voter fraud” in his announcement that he would object to the Electoral College certification of Joe Biden’s victory, Democratic Minnesota Sen. Amy Klobuchar accused him of “join[ing] a coup attempt.”

Biden accused Hawley and Texas Sen. Ted Cruz of being “part of the big lie” after they objected to the Electoral College certification.