Gov Abbott had a few things to say as he signed this into law.

You know, since some of our institutes of ‘higher learning’ still haven’t figured out the point of the First Amendment, Abbott spelled it out for them, in words even they would have trouble misunderstanding.

He signed it into law:

“I shouldn’t have to do it. First Amendment guarantees it, now it’s law in Texas.

The bill could force many Texas public institutions to make changes to their free speech policies, as only one public college or university in Texas has a “green light” distinction by the Foundation for Individual Rights in Higher Education, which measures how each school’s policy lines up with the First Amendment.

According to the Texas Tribune, the colleges and universities now have until August 1, 2020, to institute these changes.

“The Texas Senate just passed a bill mandating free speech on college campuses (including conservative speech). I look forward to signing it into law. But it’s crazy we have to pass a law to uphold the First Amendment,” tweeted Gov. Abbott in response to the incident.
Source: Campus Reform 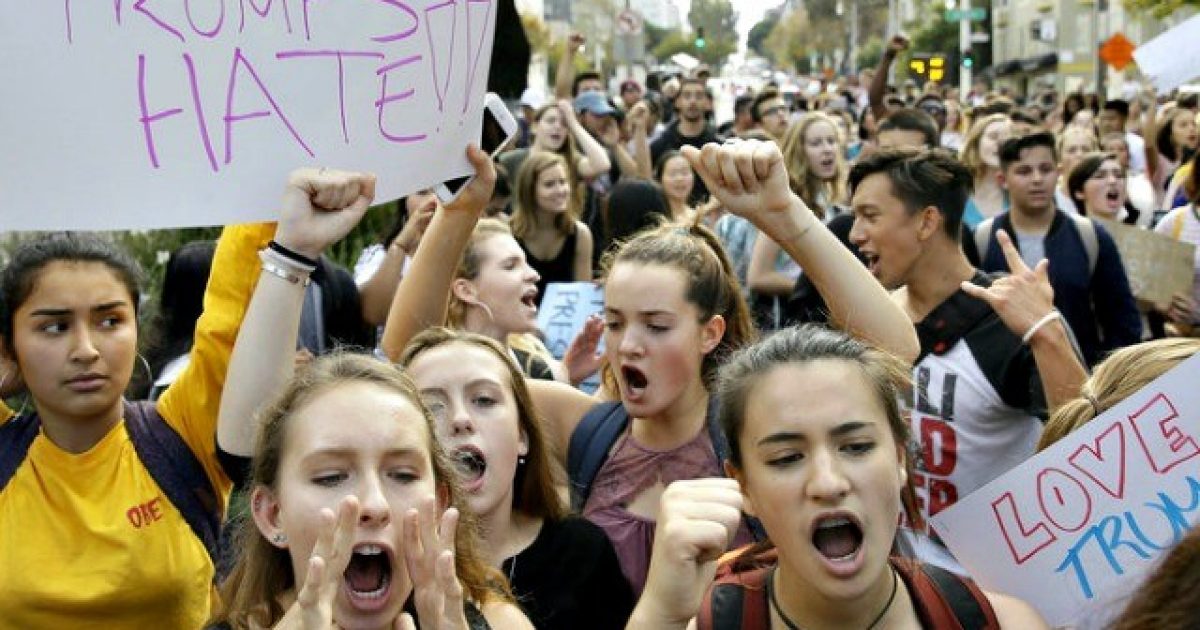 Liberalism on the university level has long-been out of control.

Instead of teaching young minds to be free thinkers, they are taught to follow-the-leader. Even when the leader is wearing a ridiculous vagina hat and hollering a bunch of socialist nonsense.

But hey, that’s what higher education is all about these days. We can’t say the downward spiral of Wackademia started with Trump’s Administration, because, frankly universities fell to leftism long ago. However, once Trump won the presidency, things escalated to a new level of ridiculousness.

Students on campuses across the country are being offered opportunities to prepare posters for next Saturday’s Women’s March events scheduled to occur in multiple cities, with one of those colleges even providing students with the supplies.

At Iowa State University, students are encouraged to stop by the union and be inspired by a playlist of Beyonce, Nina Simone, and Gloria Gaynor as they make posters with materials provided at no cost to the attendees. Students will also have the chance to pick up a feminist button or make their own for $0.50.

At the University of California, Berkeley, the Berkeley Art Museum and Pacific Film Archive will offer an opportunity to make posters with artist Masako Miki, who is currently a solo exhibitor there. Miki has already commissioned a print to commemorate the 2019 Women’s March. Miki’s art piece continues “the tradition of collaborating with artists and activists to create political poster art using the museum’s Risograph print resource,” according to the event’s webpage.

But don’t let the promises of political art give you some warm fuzzy 1960s peace rally feelings. Believe me, these aren’t your mama’s protests.

While there may be several coinciding Women’s Marches occurring across the country, not all of them will go on as originally planned. Organizers of the California Women’s March have decided to cancel their January event, citing “overwhelmingly white” participants as their reason.

Moreover, several Women’s March leaders — such as Carmen Perez, Linda Sarsour, and Tamika Mallory — have recently fallen under scrutiny for their association with the proud anti-Semite and Nation of Islam leader Louis Farrakhan.

But exactly what are these students protesting? Many of them can’t even tell the difference between an Obama quote and a Trump quote. In fact, liberals are so brain-washed to hate Trump, they automatically pounce on an idea that seems to be Trump-related. It doesn’t matter whether or not the issue has merit.

Students at American University reacted unfavorably to calls for increased border security to stem the flow of illegal immigrants, expressing shock that prominent Democrats have agreed with the idea in the past.

“Illegal Immigration is wrong, plain and simple. Until the American people are convinced we will stop future flows of illegal immigration, we will make no progress.” – Schumer, 2009

“We simply cannot allow people to pour into the United States undetected, undocumented and unchecked” – Obama, 2005

“I voted numerous times when I was a senator to spend money to build a barrier to try to prevent illegal immigrants from coming in. And I do think you have to control your borders.” –  Clinton, 2015

Students described the quotes as “dehumanizing,” “problematic” and “jingoist,” with one student dubbing it “hateful speech” and another claiming the comments contained “racial biases.”

These students were beyond shocked to learn their own party Gods were supporting Trump’s agenda before Trump was even elected. Maybe today’s college students should start learning a little more and protesting a little less. It seems leftism is costing them serious IQ points.