“We demand that Samuel Abrams’ position at the College be put up to tenure review to a panel of the Diaspora Coalition and at least three faculty members of color.” 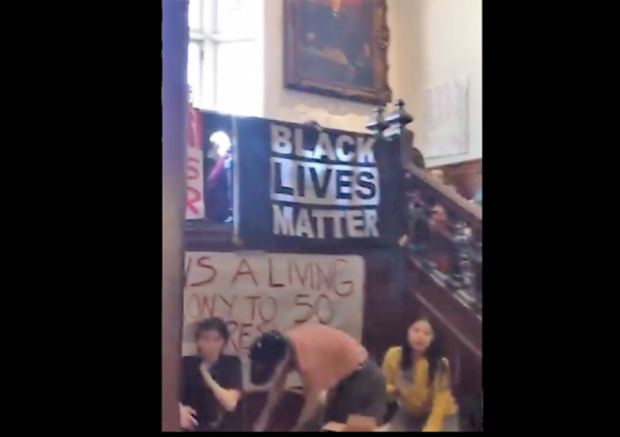 In early November 2018, we covered the story of a conservative Sarah Lawrence College professor Samuel Abrams who came under attack after writing an Op-Ed in The New York Times advocating for diversity of opinion on campuses. 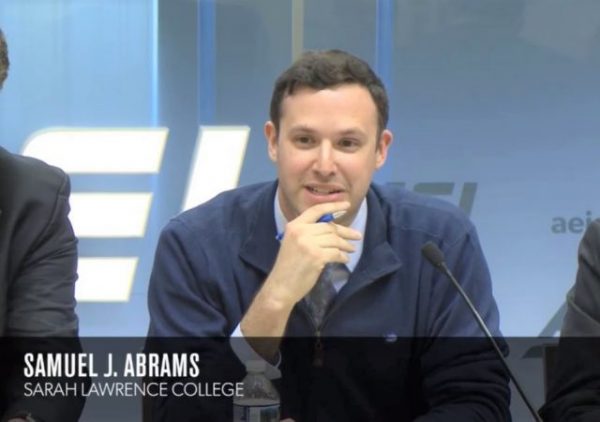 As detailed in that post, student protesters demanded Abrams be removed from campus, and his office door was defaced. Abrams wrote about his in experience at The Spectator, The dangerous silence in higher education:

Within hours, my office door and surrounding corridor was vandalized. Pictures of my family were taken and bumper stickers that I had placed on the door to create a welcoming environment for students were stripped off. The vandals covered my door and surrounding hallway area with hateful paraphernalia intended to intimidate me into leaving the school. I received subsequent threats, and an alumna I have never met claims to be actively working on ways to ‘ruin my life’ while many others are demanding that my tenure be stripped all because I wrote a relatively tame article with which they disagree.

Following the defacement of my door, I was disappointed by the lack of a clear stand against violence and intimidation, and the lack of support for academic freedom and diversity of thought I expected from the College administrators. In fact, a note I received from a College official described the act as ‘alleged vandalism.’

There is a culture at Sarah Lawrence College which is regularly reinforced by various students, faculty, and administrators: tacitly regulate what topics are open to debate and identify which questions should simply be overlooked for fear that asking them could lead to significant negative consequences. 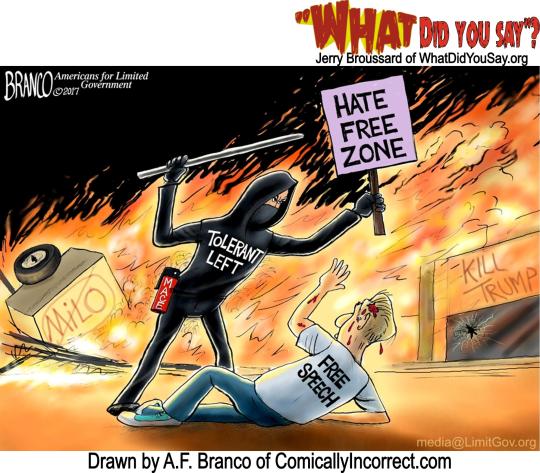 Abrams is under attack again by the campus social justice warriors.

There is a building sit-in/takeover going on at Sarah Lawrence by a coalition calling itself “the Diaspora Coalition” — an apparent reference to the African diaspora.

As part of the building takeover, the group has issued a 9-page list of demands (pdf.)(source)(full embed at bottom of post) of demands reminiscent of demand lists that were the rage a couple of years ago at places like Oberlin College.

… We, the Diaspora Coalition, are a group of students who can speak to the injustices imposed on people of color by this institution on a daily basis. The Diaspora Coalition was established this fall in order to address the pain of marginalized students as well as to advise the administration on how to best address this pain. Each of us has seen this administration repeatedly diminish the hard work of student activists who merely want a quality education and the personalized curriculum that SLC promises. We extend solidarity to all people of color in the Sarah Lawrence Community, including international students, graduate students, faculty, and staff….

On March 11, 2019, the Diaspora Coalition, along with our allied peers, will occupy Westlands, make calls to the board, and present demands that describe not only our ideal vision for the school but also what we see as the only acceptable terms by which Sarah Lawrence can remain for the students and against hate. If the College does not accept these demands, it will no longer be hailed as a progressive institution but instead remembered for its inability to truly embody its self-proclaimed progressive ideology and support all students against an international rising tide of white supremacy and fascism. Sarah Lawrence was not founded on racial or economic equality and has not implemented sufficient strategies to dismantle systematic oppression to be sustainable or safe for marginalized people in an increasingly dangerous political climate. Low-income students should not have to question if they belong at this institution. We have worked tirelessly to make our voices heard and demands met because we believe in a Sarah Lawrence that can be for the people, by the people.

“All campus laundry rooms are to supply laundry detergent and softener on a consistent basis for all students, faculty and staff.”

Among the other self-parody demands are:

“The College will designate housing with a minimum capacity for thirty students of color that is not contingent on the students expending any work or labor for the college. This housing option will be permanent and increase in space and size based on interest.”

“In addition to the expansion of the food pantry, we demand the College implement a 24/7 space in the Barbara Walters Center focused on providing food and necessities including pads, tampons, and detergent. Students should be able to obtain these items using with their meal plan or meal money.”

“We demand a mandatory first-year orientation session about intellectual elitism and classism.”

“We demand the College provide free storage to international students as part of the College’s commitment to student welfare.”

Then the Diaspora Coalition turned its attention to faculty, demanding hiring based on race (emphasis in original):

The group also demanded Sarah Lawrence “Reject Funding or Involvement from the Charles Koch Foundation and Koch-Affiliated Organizations” and then turned to Prof. Abrams (emphasis in original):

This just another attack on Prof. Abrams academic freedom. Peter Bonilla, Vice President of Programs for the Foundation for Individual Rights in Education tweeted:

2. NB: They’re arguing that students should be the arbiters of tenure on the basis of viewpoint. 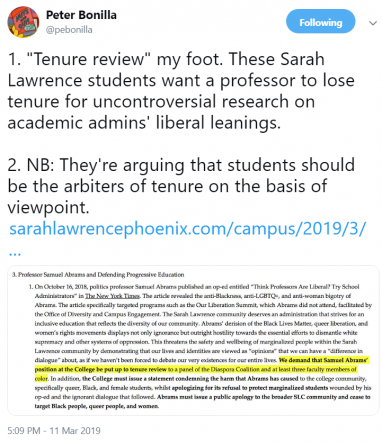 (added) In an email to me, Bonilla of the FIRE added:

“If Sarah Lawrence actually heeded the demands on his tenure “review,” or that Abrams be forced to make a public apology for his views, it would be hugely problematic from an academic freedom and due process standpoint. Tenure exists precisely to protect faculty from being targeted for their political beliefs, and its roots in American higher education are deeply intertwined with the persecution and scapegoating of progressive academics. I’d hope the Sarah Lawrence administration doesn’t need to be reminded of this, but we will be watching just in case.”