The opinions expressed by columnists are their own and do not necessarily represent the views of Townhall.com., and WhatDidYouSay.org 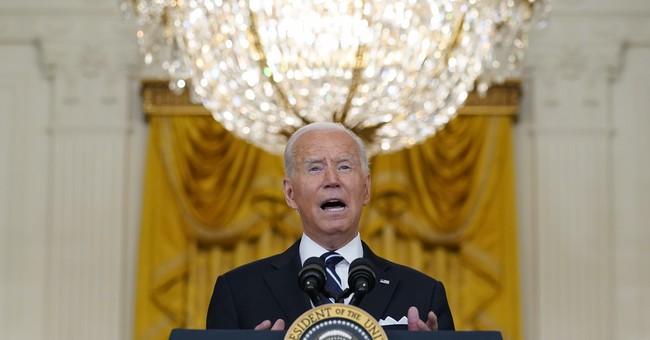 President Biden ended the war in Afghanistan earlier this week, fulfilling the broken promises of the last three presidents, whereupon both the liberal and conservative media rose up as one to shout: “NOOOOOOOOOOOOOOO!”

This is a blow to our national security! Al Qaeda is rising! A disaster! A catastrophe! Biden went against the advice of the “foreign policy establishment”!

And that was just Fox News.

MSNBC and CNN were even harsher, striking a new tone from networks that, heretofore, have found nothing to criticize about Joe Biden.

Under his masterful leadership, our nation’s murder rate has reached breathtaking heights. Despite being handed a miracle vaccine, Biden has made a mess of COVID, unfathomably returning us to masking and shutdowns, as if completely unaware: There’s a vaccine for that, Mr. President. The border is a calamity, with hundreds of thousands of foreign marauders entering our country every month — bringing exotic new COVID variants with them.

MSNBC and CNN: Isn’t he the greatest?

Hourly, there are fresh wails about our precious “Afghan allies”! We must save the translators who “risked their lives to help us!” What will happen to women under the Taliban! Afghanistan could become a “training ground” for terrorists! What about the Afghan Gender Studies programs?

The voice of moderation, Gen. Barry McCaffrey told MSNBC’S Brian Williams — I quote: “There’s another good argument, we should have stayed there with 35,000 NATO forces for the next 50 years if required.”

Fifty years. You want to see the “Swamp”? It’s out in full force this week!

Former President Bush told the press he watched the withdrawal with “deep sadness” — then demanded that we bring as many Afghans here as possible.

Obama was unavailable for comment this week, as he was partying with Beyonce, but back in 2011, after killing Osama bin Laden, he announced that the troops would be home by Christmas.

President Trump, that weathervane of popular opinion, tweeted — one month before the election — quote: “BRING OUR SOLDIERS HOME.”

Now Biden has done it. It’s our country’s good fortune that our president is too senile to be outmaneuvered by the generals as Bush, Obama and Trump were.

At this rate, maybe he’ll build the wall. (Fox News hosts of the future: Walls don’t work! What about the Emma Lazarus poem!)

On Monday, Biden gave the best presidential address in recent memory — a full-throated, America-First statement of our interests. “I want to remind everyone,” he began, “how we got here and what America’s interests are in Afghanistan.”

That seemed to bring some conservatives back to reality. They must have overheard themselves talking and realized, Wait, I’m against permanent war! But they had to come up with some reason to be against Biden, so they temporized, Of course we want the war to end, we’re just upset at how he did it!

Oh, give it up, conservatives.

1) How smoothly did you expect the withdrawal of American troops from a country of warlords, brigands and pedophiles to go?

2) Our military brass, upstanding folks like Gen. Mark “I Want to Understand White Rage” Milley, may be incapable of creating the most minimal fighting force given $1 trillion and 20 years. On the other hand, they are fully equipped to create colossal fiascos — say, making the withdrawal as messy and embarrassing as possible, so that no one will ever try to end this war again.

But for maximum brain-deadery, nothing beats the liberal media’s incessant bleating about our moral obligation to Afghans who “risked their lives to help us!”

There seems to be some confusion about who was helping whom here. Our “Afghan allies” were not helping us. The Taliban weren’t in Iowa. We were helping them.

This is like demanding that firemen who’ve just rescued people from a burning building go back and make them dinner. These people stepped out of their windows onto a ladder, risking their lives to help YOU!

There’s no reason to bring any Afghans here — much less the 100,000 Biden’s talking about. (So is Trump! Hey, Trumpsters! Ready to move on from this big phony yet?)

We’ve already brought about 50,000 translators to the U.S. and, as Daniel Greenfield points out on Frontpage.com, the maximum number of troops we ever had in Afghanistan was 100,000. That’s one translator for every two troops.

Did every Afghan spend a week as an American translator?

Remember? It was a big point in the 2004 election, raised by both John Kerry and John Edwards during the debates.

Sen. Kerry: “Osama bin Laden attacked us. … And when we had Osama bin Laden cornered in the mountains of Tora Bora … we didn’t use the best-trained troops in the world to go kill the world’s No. 1 criminal and terrorist. [Bush] outsourced the job to Afghan warlords, who only a week earlier had been on the other side, fighting against us. … That’s the enemy that was allowed to walk out of those mountains.”

Here’s Bush’s response: “Of course I know Osama bin Laden attacked us.” That’s it. The end. If Kerry hadn’t been such a sissy-boy gigolo, he would have won that election.

At least bringing the Stone Age peasants here defeats one objection of the forever-war crowd. They claim that because of our withdrawal, Afghanistan will become a training ground for terrorists.

No worries on that count. With 100,000 “translators,” each of their four wives, 14 children and innumerable uncles and cousins all coming here, Al Qaeda’s next training ground will be America.

BIDEN EFFECT: US Lost Several Military Aircraft that Were Flown Out of Afghanistan – They Have No Idea How Many Were Lost — VIDEO

Shot, stabbed Afghan woman whose eyes were knifed out by Taliban says they ‘torture us,’ feed remains to dogs