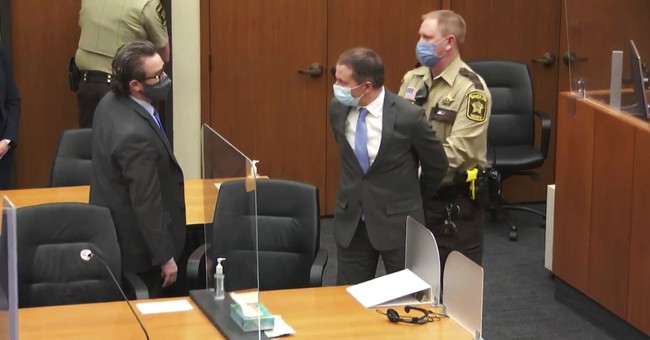 To watch the hours of celebratory fist-pumping from government officials and black activists after the guilty verdicts against police officer Derek Chauvin this week, you’d think Minnesota had just won the NCAA tournament. One man is dead and another will be spending up to 40 years in prison. How about Minnesota Attorney General Keith Ellison show a little dignity, with something like: “We had the trial; we’ve got a verdict; I’m not taking any questions”?

Nope! We got a one-hour spirit rally for the championship team. The key was teamwork. Our guys practiced every night — staying even after the gym had closed! We couldn’t have done it without the fans.

There wasn’t this much triumphalism when Ted Bundy was convicted! He murdered 30 women, escaped from jail twice, and killed again before finally being brought to trial. We didn’t have hours of gloating after they got the Green River Killer, and it took 20 years to catch him.

Maybe we’ve gotten less decorous in the past few decades. But how about celebrating the conviction of a gangbanger who killed an 8-year-old girl in a drive-by? Would the media be as giddy about that? Not likely. Wild celebrations are in order only for the railroading of a cop.

The prosecutors must feel great! All it took was threatening the jurors with riots and personal destruction to get the verdict they wanted. Real Ciceros, these guys.

The day before Chauvin’s case went to the jury, a defense witness — a witness! — had his former home in California vandalized with pigs’ blood and a pig’s head. So I’m sure the jurors reached their verdict purely based on the evidence, after a careful weighing of both sides in the Anglo-Saxon tradition.

We’re told that this is only the beginning, big changes are in the air. Does that mean every case against a cop will come with threats of mob violence?

Here’s one big change in policing that will come out of the Chauvin trial: No longer will police use the least amount of force on vulnerable individuals, like George Floyd. From here on out, the safety of the perp will take a back seat to avoiding unflattering cellphone videos. A key point brought out at trial was this: As soon as Chauvin arrived on the scene, he would have been within his rights to use a Taser or stun gun on Floyd. The prosecution’s use-of-force experts agreed! Chauvin employed a less aggressive restraint that looked worse to bystanders. Big mistake.

By now, surely, all law enforcement officers realize that their one overriding concern must always be the optics, not the reality. Unlike other public servants, police have to do their jobs while under the watchful eye of cellphone cameras. What matters is how things appear to idiot onlookers.

Heart disease is rampant in the African American community. Combine that with drug use and behavioral problems — and there are a lot more George Floyds out there waiting to happen. According to the medical examiner, it was the stress of being restrained — combined with Floyd’s heart condition and massive amount of fentanyl in his system — that killed him. If lying on the ground was too much stress on Floyd’s heart, how about 50,000 volts of electricity? Again, according to the state’s use-of-force experts, that would have been A-OK.

Got a resisting arrestee? Zap him with the stun gun and heave him in the back of the police van. Whatever happens after that, at least you won’t have a chubby EMT screaming at you and taking videos.

The other big change coming down the pike is that we are headed back to the 1960s in terms of crime. Already, 2020 marked the largest year-to-year increase in murders in the history of the country. In Minneapolis alone, the murder rate doubled. Get ready for a lot more violent crime, emboldened criminals and less aggressive police. To the unwitting citizens of Minnesota who will soon have their lives snuffed out, just remember: The jurors were worried about their own personal security. It was your life or theirs, and they decided the better part of valor was to sacrifice yours.

Their motto: I regret that I have only dozens of other people’s lives to give for my virtue.

Rand Paul: If feds want more folks vaccinated, Biden should take his mask off and burn it on TV