A report declassified last week by the U.S. Department of Homeland Security named both pro-life and pro-abortion activists on a list of domestic violent extremist groups.

The March 1 report, compiled by the Director of National Intelligence, concluded that “domestic violent extremists (DVEs) who are motivated by a range of ideologies and galvanized by recent political and societal events in the United States pose an elevated threat to the homeland in 2021.” The document included a list of “categories” of “domestic violent extremists” but did not mention any specific group or organization by name. 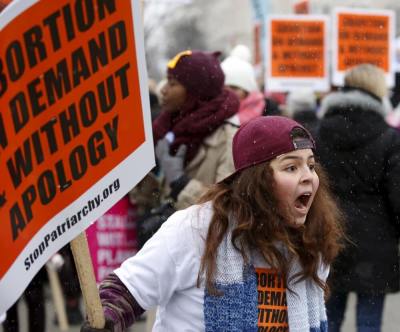 A pro-abortion activist yells at pro-life supporters (not pictured) in front of the Supreme Court during the National March for Life rally in Washington January 22, 2016. The rally marks the 43rd anniversary of the U.S. Supreme Court’s 1973 abortion ruling in Roe v. Wade. | Reuters/Gary Cameron

While pro-life activists generally carry out their advocacy peacefully, there have been instances of violence committed against abortion providers, advocates and clinics.“Abortion-related domestic violent extremists,” defined as “DVEs with ideological agendas in support of pro-life or pro-choice beliefs” were listed as one of the categories of domestic violent extremists identified by the intelligence community. The report maintained that “mere advocacy of political or social positions, political activism” and “use of strong rhetoric may not constitute violent extremism, and may be constitutionally protected.”

More broadly, “domestic violence extremists” were defined as “U.S.-based actors who conduct or threaten activities that are dangerous to human life in violation of the criminal laws of the United States or any state; appearing to be intended to intimidate or coerce a civilian population; and influence the government by mass destruction, assassination, or kidnapping.”

Even before the motive of the shooter was revealed, pro-life groups were quick to condemn the slaying of the abortion provider. The pro-life group Susan B. Anthony List described Tiller’s murder as an “anti-life act,” with its President Marjorie Dannenfelser asserting that “the rights of one human being can never be honored by diminishing or ignoring the rights of another.”

Additionally, someone named Scott Roeder had left comments on the pro-life website Operation Rescue, comparing Tiller to a Nazi death-camp doctor, who “needs to be stopped before he and those who protect him bring judgment upon our nation.” Operation Rescue explained that Roeder had “never been a member, contributor, or volunteer with the organization,” and that thousands of people post on the website’s public forum on a daily basis.

The former congressman also said that she told him she wanted to “send her boys over to go see Jim” and commented after the murder that “I have solved the city’s problem, my son has shot Jim Pouillon.” The judge overseeing the case refused to let the jury hear the former congressman’s testimony, which he characterized as “hearsay.” Then-President Barack Obama, an outspoken supporter of abortion, condemned Pouillon’s murder, saying that “whichever side of a public debate you’re on, violence is never the right answer.”

While no one was seriously injured at the Minnesota pro-life event, the perpetrator left behind a “stink bomb” that can cause “nausea and headaches,” “eye irritation, a loss of smell, pulmonary edema, and even death.” People seated near where the “stink bomb” was located “began to feel sick, and were coughing and feeling light-headed” while “at least three people reported headaches and chest irritation.”

Christians must change their strategy to keep graphic sex materials out of schools: expert