Horowitz: For the first time in our lives, free speech is about to be criminalized

“Our First Amendment freedoms give us the right to think what we like and say what we please. And if we the people are to govern ourselves, we must have these rights, even if they are misused by a minority.” ~James Madison

We never thought this day would arrive in America. Last year, we learned that they can shout “COVID” as an emergency, and our life, liberty, and property disappear. They can shout “racism,” and our inalienable right to self-defense disappears. The last thing we had was the freedom to criticize what is happening, even if there was nothing we can do about it. Now they can shout “right-wing terrorism” or “right-wing conspiracy” and say that freedom of speech no longer applies.

Leftists in this country claim that their violence is speech and our speech is violence. That is why they glorified riots last year that burned down numerous cities, caused thousands of injuries, cost billions of dollars, and elevated their cause as the most urgent grievance in need of redress. At the same time, they are pushing to criminalize not just the violent acts and actors at the Capitol on January 6, but any view or speech or assembly predicated on views that are held by those people. This is why they seem to be taking direct shots at the First Amendment’s guarantee of freedom of speech for Americans, even as they plan to grant amnesty to those whose entire presence in this country is illegal.

As everyone focuses on the corporate world violating the spirit of the First Amendment by excommunicating anyone with conservative views, watch carefully how the governmental actors are coming very close to violating the letter of the First Amendment with the force of the “law” behind it. Big tech might have a monopoly on the internet and communications, but government has a monopoly on violence, law, and the ability to restrain our liberty. If we don’t wake up immediately, our speech and freedom to assemble will be not only censored, but criminalized.

It started on January 6, when Tom Edsall published a column in the New York Times noting, “A debate has broken out over whether the once-sacrosanct constitutional protection of the First Amendment has become a threat to democracy.” This is a tried and tested tactic of the Left – to have their columnists float a radical idea as a “debate,” while their governmental actors begin working on it in earnest.

Just take stock of what we are seeing out in the open. They are now arresting people all over the country for merely being in the Capitol, even if they didn’t engage in violence, vandalism, or theft. Had this standard been applied to Black Lives Matter, there would literally have been millions of arrests. So no, this is not just about punishing those who acted violently. The FBI is placing signs all over the country asking people to report those who were at the Capitol, something that never happened even in the most deadly BLM/Antifa riots last year, or at Trump’s inauguration four years ago in D.C. 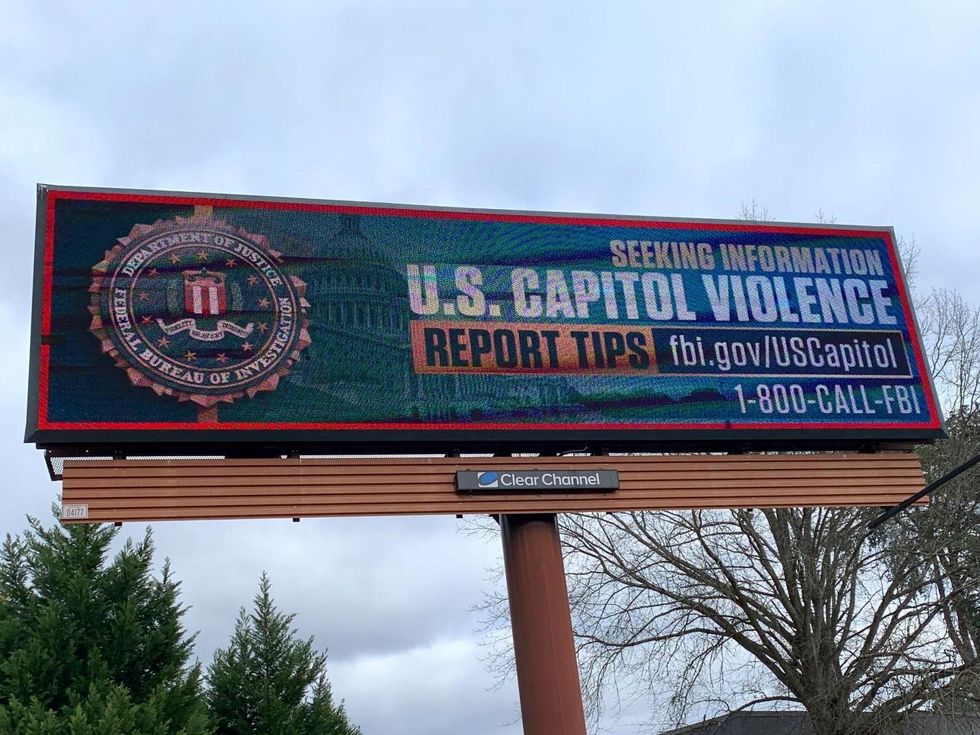 They are militarizing D.C. with 20,000 troops, when the threat of violence against Trump’s inaugural guests four years ago was exponentially greater. They are declaring emergencies in states as remote as New Mexico with no evidence of violence present. Garrett Soldano, a leader in the anti-lockdown movement in Michigan, claims the FBI paid him a two-hour visit because a local called the FBI and claimed he is a violent extremist.

If the FBI had done this when hundreds of cities were on fire for days on end with no control among local police departments, I would just feel they are being overly cautious. Given that BLM was promoted as the leader of our civic discourse and we are all being treated like terrorists, however, we should be very scared they are coming for the First Amendment, not for national security. Remember, the Justice Department seems to believe this was a planned attack. So the hundreds of thousands of Trump supporters who just came there to express their views had no idea that a few bad actors were planning this. The fact that they are hunting down anyone and everyone should scare us all.

Last week, Pennsylvania Lt. Gov. John Fetterman said emphatically that the First Amendment doesn’t apply to sentiments he disagrees with. “This idea that saying that Pennsylvania was ‘rigged’ or that we were ‘trying to steal the election’ — that’s a lie. And you do not have the right, that is not protected speech.”

Thus, from now on, Democrats can unilaterally change election law in middle of an election – up until and including abolishing Election Day in favor of mail-in ballots – and anyone who criticizes it or organizes a rally against it is subject to prosecution? These comments would be comical if they didn’t coincide with actions taken by his party coming into power in Washington that look a lot like martial law.

In other words, if you watch the language the Left is using about our speech and the actions the Biden administration and the governors are taking, it’s quite evident that Big Tech is not the only thing we have to worry about. If nothing changes, I predict that even if Parler is able to become completely independent in the private market, the government, which has the ultimate monopoly on power, will shut it down.

Last week, Minnesota Attorney General Keith Ellison, the same man who is prosecuting business owners and threatening them with labor camps for earning a living, said on a conference call with prosecutors that he is investigating those from his state who merely attended the rally.

Already in 2019, Richard Stengel, the Biden transition “team lead” for the U.S. Agency for Global Media, wrote in a Washington Post op-ed that the First Amendment needs curtailment. “All speech is not equal. And where truth cannot drive out lies, we must add new guardrails. I’m all for protecting ‘thought that we hate,’ but not speech that incites hate,” wrote Stengal.

This is pretty bizarre coming from a side of politics that already controls 99% of all speech and big business that controls speech. What exactly are they afraid of? If anything, we are the ones who should be scared of their speech, given the monopoly they hold.

Well, George Washington already warned us about the motivations of those who clamp down on speech. “For if Men are to be precluded from offering their Sentiments on a matter, which may involve the most serious and alarming consequences, that can invite the consideration of Mankind, reason is of no use to us; the freedom of Speech may be taken away, and, dumb and silent we may be led, like sheep, to the Slaughter,” said Washington in an address to the Continental Army on March 15, 1783.

The question facing patriots in the coming days is quite simply this: Will we allow that final domino to fall?