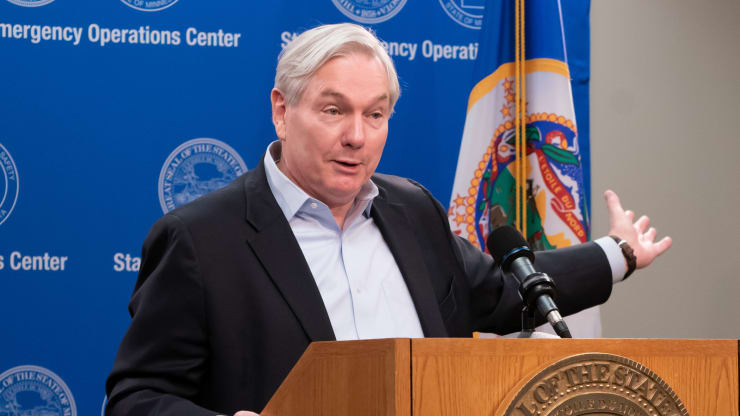 Shutting down businesses and paying people for lost wages for four to six weeks could help keep the coronavirus pandemic in check and get the economy on track until a vaccine is approved and distributed, said Dr. Michael Osterholm, a coronavirus advisor to President-elect Joe Biden.

Osterholm, who serves as director of the Center of Infectious Disease Research and Policy at the University of Minnesota, said earlier this week that the country is headed toward “Covid hell.” Cases are rising as more people grow tired of wearing masks and social distancing, suffering from so-called “pandemic fatigue,” he said Wednesday. Colder weather is also driving people indoors, where the virus can spread more easily. A nationwide lockdown would drive the number of new cases and hospitalizations down to manageable levels while the world awaits a vaccine, he told Yahoo Finance on Wednesday.

“We could pay for a package right now to cover all of the wages, lost wages for individual workers, for losses to small companies, to medium-sized companies or city, state, county governments. We could do all of that,” he said. “If we did that, then we could lock down for four to six weeks.”

In an interview with NBC News on Thursday, Osterholm clarified his comments, saying “it was not a recommendation. I have never made this recommendation to Biden’s group. We’ve never talked about it.”

“My only point was if we are going to keep making restrictions state-by-state, there is no compensation for the businesses that are being impacted,” he added. “What we’re doing right now is not working.”

A Biden transition official told NBC News that a shutdown “is not in line with the president-elect’s thinking.”

Osterholm was appointed to Biden’s 12-member Covid “advisory board” on Monday. The panel of advisors is co-chaired by former Surgeon General Vivek Murthy, former Food and Drug Administration Commissioner David Kessler and Dr. Marcella Nunez-Smith of Yale University. Other task force members include Dr. Atul Gawande, a professor of surgery and health policy at Harvard, and Dr. Rick Bright, the vaccine expert and whistleblower who resigned his post with the Trump administration last month.

A representative for Biden did not respond to CNBC’s request for comment.

Osterholm on Wednesday referenced an August op-ed he wrote with Minneapolis Federal Reserve President Neel Kashkari in which the two argued for more restrictive and uniform lockdowns across the nation.

“The problem with the March-to-May lockdown was that it was not uniformly stringent across the country. For example, Minnesota deemed 78 percent of its workers essential,” they wrote in The New York Times. “To be effective, the lockdown has to be as comprehensive and strict as possible.”

On Wednesday, Osterholm said such a lockdown would help the country bring the virus under control, “like they did in New Zealand and Australia.” Epidemiologists have repeatedly pointed to New Zealand, Australia and parts of Asia that have brought the number of daily new cases to under 10 as an example of how to contain the virus.

“We could really watch ourselves cruising into the vaccine availability in the first and second quarter of next year while bringing back the economy long before that,” he said Wednesday.

On the current trajectory, Osterholm said the U.S. is headed for dark days before a vaccine becomes available. He said health-care systems across the country are already overwhelmed in places such as El Paso, Texas, where local officials have already closed businesses and the federal government is sending resources to handle a surge in deaths caused by Covid-19.

Osterholm said the country needs leadership. The president-elect is up to the task of providing that leadership, Osterholm said, adding that it could also come from local and state officials or those in the medical community. He referenced the fireside chats broadcast over radio during former President Franklin D. Roosevelt’s terms, through which Roosevelt addressed the country on issues ranging from the Great Depression to World War II.

“People don’t want to hear that El Paso isn’t an isolated event. El Paso, in many instances, will become the norm,” he said. “I think that the message is: How do we get through this? We need FDR moments right now. We need fireside chats. We need somebody to tell America, ‘This is what in the hell is going to happen.’”