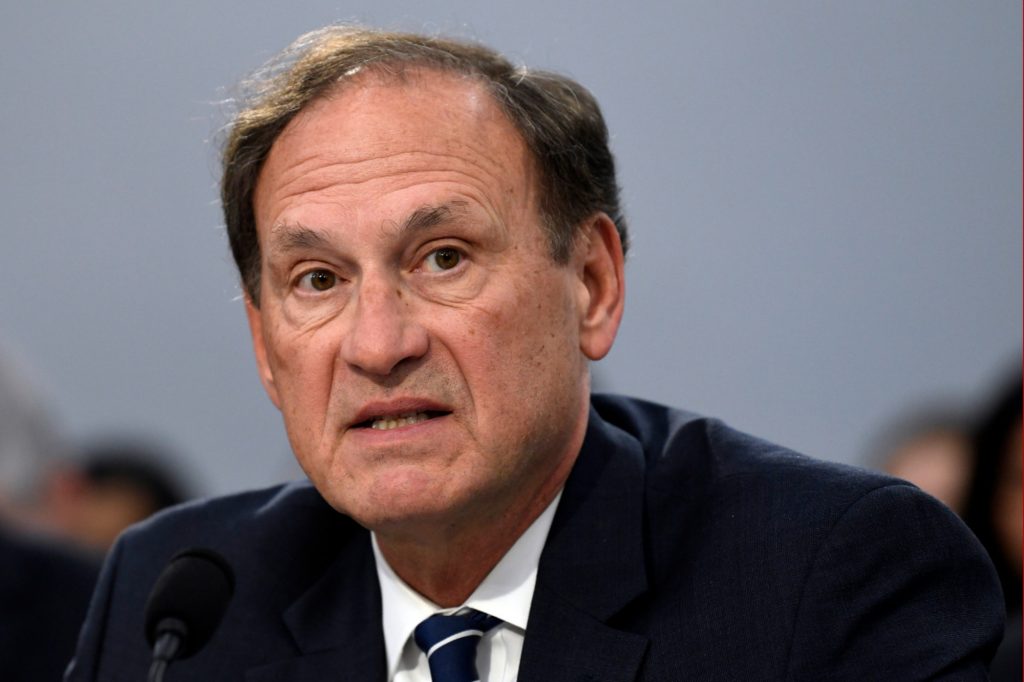 Supreme Court Justice Samuel Alito delivered an unusually inflammatory public speech Thursday night, starkly warning about the threats he contends religious believers face from advocates for gay and abortion rights, as well as public officials responding to the coronavirus pandemic. Speaking to a virtual conference of conservative lawyers, the George W. Bush appointee made no direct comment on the recent election, the political crisis relating to President Donald Trump’s refusal to acknowledge his defeat or litigation on the issue pending at the Supreme Court.

However, Alito didn’t hold back on other controversial subjects, even suggesting that the pressure Christians face surrounding their religious beliefs is akin to the strictures the U.S. placed on Germany and Japan after World War II.

“Is our country going to follow that course?” Alito asked. “For many today, religious liberty is not a cherished freedom. It’s often just an excuse for bigotry and can’t be tolerated, even when there is no evidence that anybody has been harmed. … The question we face is whether our society will be inclusive enough to tolerate people with unpopular religious beliefs.”

Alito argued that some recent Supreme Court decisions, including the landmark ruling upholding a constitutional right to same-sex marriage, fueled intolerance to those who believe marriage should be limited to unions between one man and one woman.

Alito also seemed to minimize the significance of a refusal of a Colorado baker to produce a wedding cake for a same-sex couple. The justice noted that the couple involved “was given a free cake by another bakery” and that the high-profile standoff prompted “celebrity chefs” to come to their defense.

Justices often include pointed, even barbed, language in their opinions. Indeed, Alito regularly does so, and many of his remarks Thursday night echoed similar comments he’s made in caustic dissents. Still, it is uncommon for a justice to weigh in on hot-button topics like abortion or gay rights in speaking appearances open to the press or public.

During his half-hour-long speech, Alito warned that not only is freedom of belief increasingly under threat, but freedom of expression is as well.

“One of the great challenges for the Supreme Court going forward will be to protect freedom of speech. Although that freedom is falling out of favor in some circles, we need to do whatever we can to prevent it from becoming a second-tier constitutional right,” he said.

While the conservative justice insisted he was not opining on the legal questions related to coronavirus lockdown orders and similar restrictions, he painted those moves as oppressive.

“The pandemic has resulted in previously unimaginable restrictions on individual liberty,” Alito said, insisting that such an observation was transparently true. “The Covid crisis has served as a sort of constitutional stress test and in doing so it has highlighted disturbing trends that were already in evidence before the pandemic struck.”

Alito also used his address to trash a brief Democratic senators filed last year in a gun rights case, warning the court that lawmakers might move to restructure the court if it continued to produce what the senators asserted were politically motivated rulings.

“It was an affront to the Constitution and the rule of law,” Alito said, paraphrasing remarks he made in court. “It is … wrong for anyone, including members of Congress, to try to influence our decisions by anything other than legal argumentation. That sort of thing has often happened in countries governed by power, not law.”

Alito did not make reference to Trump’s numerous public affronts to federal judges. In 2018, those relentless attacks prompted Chief Justice John Roberts to issue an unusual statement coming to the defense of the independence of the judiciary.

Many lawyers took to Twitter on Thursday night to accuse Alito of hypocrisy for delivering a highly politically charged speech that was devoted in part to complaining about lawmakers casting the court as political.

“This speech is like I woke up from a vampire dream,” University of Baltimore law professor and former federal prosecutor Kim Wehle wrote. “Unscrupulously biased, political, and even angry. I can’t imagine why Alito did this publicly. Totally inappropriate and damaging to the Supreme Court.”

Alito also engaged in another regular lament from legal conservatives, complaining that law schools are hostile to those with right-of-center political views and others whose beliefs go against the majority viewpoint.

“Unfortunately, tolerance for opposing views is now in short supply in many law schools and in the broader academic community,” the justice said. “When I speak with recent law school graduates, what I hear over and over is that they face harassment and retaliation if they say anything that departs from the law school orthodoxy.”

Alito, who attended Princeton as an undergraduate and Yale for law school, used a century-old precedent related to a smallpox outbreak in Cambridge to take a not-particularly-veiled shot at a prominent Ivy League school he did not attend: Harvard.

“I am all in favor of preventing dangerous things from issuing out of Cambridge and infecting the rest of the country and the world. It would be good if what originates in Cambridge stays in Cambridge,” the justice joked.