While peaceful protests took place in Seattle, Washington on Sunday, there was also no shortage of looting and rioting in the Emerald City and surrounding suburbs. Gov. Jay Inslee activated the National Guard statewide late Sunday evening, but some residents in the Seattle suburb of Bellevue weren’t waiting for authorities to protect them. Video taken on Sunday afternoon shows several armed citizens standing guard over the entrance to their neighborhood.

Citizens in Bellevue (Seattle suburb) are protecting their neighborhoods from rioters & looters. pic.twitter.com/s6UpMtdXfM

While there were reports of looting in Bellevue on Sunday evening, it looks like it was confined to downtown businesses.

Despite curfews in both Bellevue and Seattle, peaceful protesters moved through each city well into the night. However, just blocks over in Bellevue, looters broke into Lincoln Square, Bellevue Square, The Bravern, and into small shops.

Streets in downtown Bellevue were full of smoke and sidewalks littered with glass.

Picture of the car on fire in downtown Bellevue. 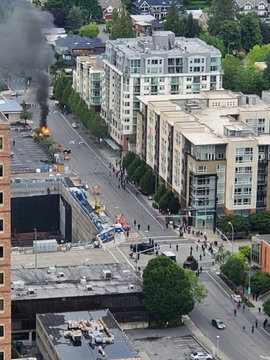 40 people are talking about this

Late Sunday, Bellevue officials imposed a curfew in the downtown area, and the mayor declared a civil emergency for downtown, which included a ban on firearms in the effected area and punishments ranging from a fine of $250 to a 90 day jail sentence for those caught with any weapon, from guns to lumber to skateboards.

I wouldn’t be surprised if local business owners ignored that prohibition on firearms in order to protect their businesses, given the widespread destruction we’ve seen in cities across the country. They may also take the mayor to court, arguing that the city is failing to keep their businesses and property protected. The order also doesn’t apply to residential areas, so the armed homeowners protecting their neighbors aren’t subject to the mayor’s weapons ban.

Perhaps these armed citizens wouldn’t feel the need to protect businesses if they felt like police and the National Guard had a handle on things. Seattle talk show host Dori Monson, in a scathing column, says Seattle’s leaders like Mayor Jenny Durkan have failed residents during a time of crisis.

Having seen for days what was happening in city after city, how did our political leaders not know that was going to happen in Seattle Saturday? When the Seattle protests were announced, I said on my show Friday that they were inevitably going to lead to disaster for our city.

So, why did our political “leaders” allow this mayhem to happen? There are only two possible answers: That they truly did not see this coming, in which case they really are too ignorant for their jobs and should resign immediately; or that they did see this coming and decided to allow it to happen anyway.

Monson says Durkan declared that “weapons are not allowed” in downtown Seattle, but the rioters simply ignored the mayor’s impotent proclamation.

She said they were caught off guard by the riots. Again, they’re the only ones who didn’t see this coming

She said to the rioters, “you cannot use inappropriate activity to destroy businesses.”

Uh, Jenny? Were you watching the coverage? They can — and did — use “inappropriate activity.” Did you really think talking to rioters like a scolding kindergarten teacher was going to make a difference?

She ended her presser by saying if you are determined to cause chaos and destruction, “stay home.”

That scolding also didn’t seem to have any impact of the rioters.

Scolding won’t have any impact on rioters. Consequences will. Arrests need to be made. Order needs to be restored, or else the chaos will only continue. Residents and business owners have no choice but to protect themselves and their livelihoods while officials twiddle their thumbs and utter platitudes.

Take a Look at What I Found Today

Getting Caught Up With More Political INCORRECTNESS