Two weeks ago, my neighborhood was one of many in the country that was looted. Nearly every store assaulted, trashed, and emptied. In some cases, the looters returned to the same store a dozen times – just to make sure they didn’t miss anything. One of those was across the street from my window, where my wife huddled alone, filming the rotating mob on her iPhone.

They were more than a mob – a collection of mobs really– but they were also well organized, determined, and had a specific taste for Balenciaga. They even returned to that store later in the week, tore down the plywood that covered the shattered glass – just to re-loot it again. It reminded me of a guy who goes back to an ashtray to smoke old butts.

My friend who runs a restaurant watched one teen face-timing with his mom, telling her what his take had been so far. He couldn’t have been more than 17.

I wasn’t home that night. My wife was. She was alone in our apartment in the epicenter of this unfettered crime wave. I didn’t know it at the time, because she told me she was at a friend’s house outside the city. She had gone to her friends initially but decided to come home early, assuming my warnings were exaggerated (as they often are).  And as it got late, she realized it was a mistake.

Go figure: The boy who always cried wolf, actually saw the real wolf coming.  She didn’t call me – thinking I would have freaked out. She was right on that.

We had hired private security the night before to watch over the property. The looters were still able to bash one storefront in our building. But the apartments were unscathed. 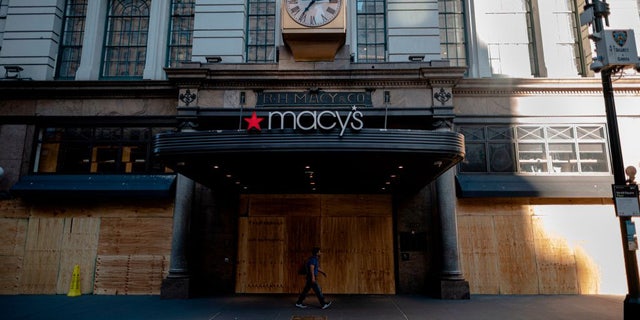 The Macy’s store at Manhattan’s Herald Square is covered with boards to prevent any damages from potential George Floyd protests on June 1, 2020 in Lower Manhattan in New York City. –  (Photo by JOHANNES EISELE/AFP via Getty Images)

The next night, however, rioters lurked the streets, uninterested in stores, but residences. I was told by the building manager that he heard from others that they were throwing hammers up at apartment windows.

When I mentioned this unraveling hell on social media – someone mocked me for my suffering. That by living in such an area – I had it coming. It’s the lifestyle equivalent of “the way you’re dressed, you’re practically asking for it.”

So let’s address that. I live where I live because I can afford to live there. After working for 35 years, climbing up the ladder – I made it. My first job paid me 12 grand a year. I was dead broke in my early twenties. I ended up squatting in a semi-vacant building in Georgetown during part of one summer. I had to leave a moat of borax around my foldaway bed, so the roaches wouldn’t climb into my sheets. Needless to say, I really didn’t date much during this period. 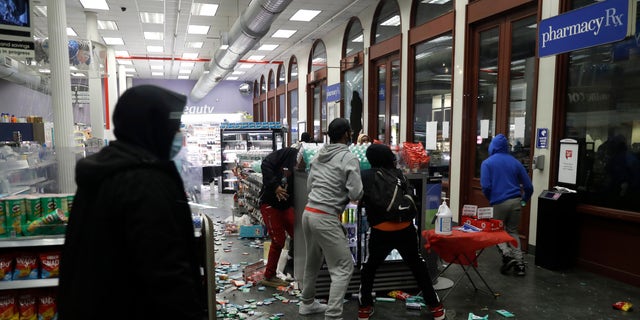 People grab items inside a pharmacy that had its windows broken in New York, Monday, June 1, 2020. (AP Photo/Seth Wenig)

Later, I slept on couches belonging to people only slightly better off than me. I was then unemployed, living at home for a year, following that.

In my thirties, I finally tasted the low six figures, when I became editorial creative director of Men’s Health.

Then, after a few more editorial gigs, I took a pay cut to come to Fox.

Over 30 years, I made it to a point where I could live in a neighborhood that is so alluring, it would be savagely assaulted by mobs the moment the chance for that, availed itself. I tell you this to remind you that every person operating a business that was attacked and looted also worked most of their lives to have that business.  It’s their life. Their sweat. Their hard work. They earned their success.

And the people who took it from them are despicable.

And the people who defend this in the media and elsewhere, are beyond redeemable. They are apologists for terror.

I pray they never experience what these people have during these past riots.

No one has the right to take what belongs to you. No one can say, “That’s no longer yours — it’s mine.”

But not in the minds of the identity obsessed and eternally aggrieved.

If you’ve succeeded in life, then you’re easy pickings for life’s envious losers.

For days afterward, I couldn’t go back.

There was something sad and bad about the area. It reminded me of the time a college buddy got his blue Mustang stolen. When they found the car, insurance wouldn’t total it, because they said the damage was minimal. We looked at the car. It was trashed inside. They obviously gutted the ignition. It appeared they had relieved themselves a number of times in the back seat.

They stole the radio and shredded the seats. There were things done in that car that defied description because we weren’t sure exactly what we were looking at. You could tell my buddy just wanted to get rid of the car. There was a stain to it you couldn’t remove. A smell. A scar. An everlasting memory. It had been ruined – violated for life – and you would always feel that violation when you got in the car.

I felt that way as I now walked the blocks around my apartment – with every store boarded up, covered with leaflets and spray-painted warnings to “Pigs.”  Can this place ever return? Will I ever forget, or just accept, what happened?

The streets were now quiet and calm; the police now present. The bars were opening; serving to-go cups to patrons, since no one has yet figured out how to seat customers since COVID. People stare at each other, drinking cocktails, pretending life is almost normal.

Make no mistake: what happened in my neighborhood was no protest. It was an opportunity taken.

As the protesters, agitators and rioters spread the police force thin, it proved a glorious time to hit all those vulnerable stores, with their empty streets caused by the shutdown. I imagine if the streets were teeming with foot traffic, maybe the mayhem wouldn’t have happened.

To say I am demoralized is an understatement.

I remember the surreal daze that 9/11 created among all of us New Yorkers. We wandered around like bewildered survivors, wondering when this evil fist will strike again.

Every plane that crossed the skies above us made us twitch.

For weeks after, we drank a lot, did mounds of drugs and hooked up with people we shouldn’t have. The hedonism numbed the fear, until the fear faded.

That was the solution for many of us.

But today feels different and more hopeless- — only because we can’t find a solution, at all.

And also, because “we” did it to ourselves. The looters and rioters likely live in New York or Jersey. They really knew the turf. But worse, the trigger for a repeat performance presents itself daily. And once it’s pulled, such pandemonium will erupt again.  All it takes is another video, or a not-guilty verdict for one of those cops, or even a Trump win in November.  Because we’ve sanctioned the behavior of the mob, it’s inevitable.

There are 10 million arrests every year. And out of that, roughly 1,000 people are fatally shot by police. Most of the dead are white. But it doesn’t matter. One video with a racial difference and this will kick off again. Which is why we don’t do something, we are doomed.

We are stuck in a repeat cycle, where the media selects the story offered up by the enraged and amplifies it even more. They ignore one crime but embrace another – to fulfill a narrative.

The major media need to figure out a way to reduce the amplification of this narrative. Because the odds of another video appearing to show explosive and ugly violence, is 100 percent.

As I wrote this piece on Saturday night, another terrible incident took place in Atlanta – resulting in rioting and the wholesale destruction of a Wendy’s (this, after the chain donated a half-million dollars to “social justice”).

As long as we are at the mercy of many in the media’s interpretation of the larger issue that these videos speak to — the chaos will never end. We – the industry – must go beyond what many seem to be doing – just ginning up the racial divide.

There are some videos you don’t see. Like the one of the death of Tony Timpa. If he were a black man you would know of him. I didn’t know of him until a recent, devastating Sam Harris podcast. I didn’t get it from cable news. These videos are horrifying but they don’t tell entire stories.

It’s not literally “black and white.” Sometimes the fuller story is worse, as Scott Adams points out. It may not be racially motivated, but it’s repugnant nonetheless.

You see repetitive evidence of bad, insufficient training and absurd policies that scream for reform.

Yet the media focuses almost entirely on skin color – when there is a difference in that one variable among the police and the suspect. Which is why, as Harris believes, you didn’t hear much about Timpa or any other white victims for that matter.  This — as stark statistics undermine the racial narrative at many turns.

If the media took its foot off the racial gas pedal and put it on the training and policy lever, we would not only make real progress in policing, we might even save a country – the greatest country that ever was. And the key word of that previous sentence is “was.”

But also media reform, too.

It’s time to get moving and face facts. Literally.

Greg Gutfeld currently serves as host of FOX News Channel’s (FNC) The Greg Gutfeld Show (Saturdays 10-11PM/ET) and co-host of The Five (weekdays 5-6PM/ET). He joined the network in 2007 as a contributor. He is author of the new book, “The Plus: Self-Help for People Who Hate Self-Help.”  Click here for more information on Greg Gutfeld.