Horowitz: Whose streets? Not Antifa’s. Time to take the roads back from the mob, America

Nearly every politician and police chief is speaking in hushed tones about the sacred duty to protest the killing of George Floyd and the need to defend protesters’ “constitutional right” to protest anywhere, any time – no matter how disruptive and dangerous to those who don’t join in. What we never hear about is the right of Americans to travel safely on the roads and not be pulled out of their cars and beaten or killed by those blocking their way or belligerently approaching the cars.

As I reported last week, there is a growing trend of police departments passively allowing “protesters” to block roadways, leaving motorists with the impossible choice between risking running through the crowd or stopping and getting beaten by the rioters. In several cases now, it’s the victim who is jailed by police while the assailants face no charges, as if the First Amendment right to assemble includes blocking roads and menacing drivers.

It’s time for Trump to demand that our roads, especially interstate highways, be secured, or else he should call in the military to do so.

Disabled vet on life support after being shot through car window

Do Americans need to suffer a new stay-at-home order to avoid being carjacked by the “peaceful” protesters? Last Thursday, Danny Pruitt, 49, was shot through the window of his car while driving down Main Street in Alamosa, Colorado. This is a small town, not exactly where any motorist would be expecting a violent protest. Video surveillance shows Pruitt’s black truck pulling up at a crosswalk on Main Street last Thursday afternoon when one protester pulled a gun from his pocket and shot Pruitt in the head. Pruitt, a disabled veteran, is now on life support.

Initially, some of the protesters started to claim that he drove through the crowd, which has become the new charge justifying their right to block and lynch drivers. However, police say there is no evidence of that. Shockingly, the man they arrested and charged with the murder is a defense attorney, James Marshall.

A GoFundMe page has been created by Pruitt’s family to cover his medical bills.

There is no right to block traffic

Have we now become like Fallujah, where Sunni militias can set up roving checkpoints and force you to stop and get killed? The rights to free, unrestricted movement and self-defense have been tossed out for the “right” to belligerently occupy city streets and highways. Let’s be clear: No such right exists. There is no right to have indefinite dynamic marches that include violence, disruption, and intimidation.

The First Amendment right to peacefully assemble is closely connected to and naturally flows from the right to free speech. You have the right to assemble a protest and not be punished for what you are saying politically. But you don’t have the right to occupy city streets or to use any particular venue to promote your speech. That is antithetical to an individual right. Police have an obligation to protect the rest of the citizenry. There has been enough violence to justify moving these protests to specific areas and making city streets, and certainly main streets and highways, off-limits to occupation.

Even without this scale of violence, government can regulate the time, place, and manner of a peaceful protest, provided that those conditions are reasonable and not prohibitive and don’t target the assembly’s message. As the Supreme Court ruled in Ward v. Rock Against Racism (1989) with regard to New York City regulations on sound levels of a rock band rally in Central Park, Manhattan:

Our cases make clear, however, that even in a public forum, the government may impose reasonable restrictions on the time, place, or manner of protected speech, provided the restrictions “are justified without reference to the content of the regulated speech, that they are narrowly tailored to serve a significant governmental interest, and that they leave open ample alternative channels for communication of the information.

The foundation of this principle is from Cox v. New Hampshire (1941), in which the court ruled that states and cities can require permits and fees to hold parades on the streets: “The authority of a municipality to impose regulations in order to assure the safety and convenience of the people in the use of public highways has never been regarded as inconsistent with civil liberties, but rather as one of the means of safeguarding the good order upon which they ultimately depend,” wrote Justice Charles Evans Hughes for the unanimous court.

In this case, the concern is a lot more than just noise levels and touches on the core of public safety. As the court said in Cantwell v. Connecticut (1940), “When clear and present danger of riot, disorder, interference with traffic upon the public streets, or other immediate threat to public safety, peace, or order appears, the power of the State to prevent or punish is obvious.”

The police do this all the time in order to preserve the safety of everyone and avoid impeding commerce and the flow of traffic. Why are some protests more equal than others? Why are they allowed to set up their own checkpoints?

Seattle #antifa extremists have occupied the Capitol Hill area in Seattle & turned it into a no-go zone. They have their people patrolling the barriers they set up. Local news crew was chased out. They had to seek refuge in fire station. 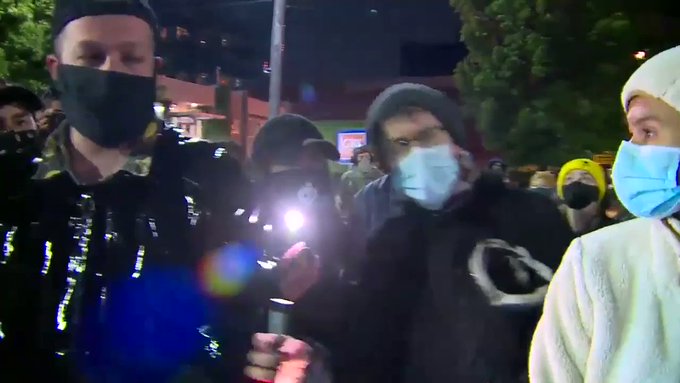 5,600 people are talking about this

The case of Nikolas Fernandez in Seattle and unequal justice

The case of Danny Pruitt is unique in that he is not being criminally charged and the assailant was actually charged. But that is because Pruitt didn’t defend himself and is on life support. What if you actually defend yourself? Then you go to jail, while the lynchers illegally blocking traffic with impunity get off free.

According to his lawyer, Nikolas Fernandez was terrified as his car was approached by a mob while he was driving to work at a Nike store in Seattle and banged into a police barrier in the road Sunday night. He brandished his gun, and Daniel Gregory, one of the protesters, reached in and punched him in the face.

Here’s an interview of the man who was shot.

Here’s is more complete footage of what happened in Seattle, with the car speeding in, an apparent shooting, and the man getting out with a gun.

6,596 people are talking about this

#Seattle suspect is Nikolas Fernandez & he is Latino. According to witness, driver Fernandez was chased by mob. He brandished a handgun. A man allegedly reached inside the car to try to take gun & got shot in the arm. Driver surrendered himself to police immediately. #antifa 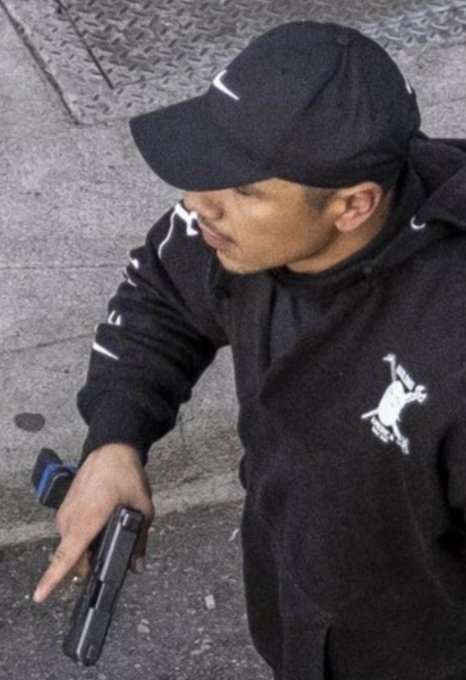 Here’s the moment the man rushed the driver and tried to steal his gun before getting shot in the arm. He’s in stable condition and the driver is currently in jail with bail denied. Disinformation actors online spread accusation Fernandez is a “known white supremacist.” #antifa 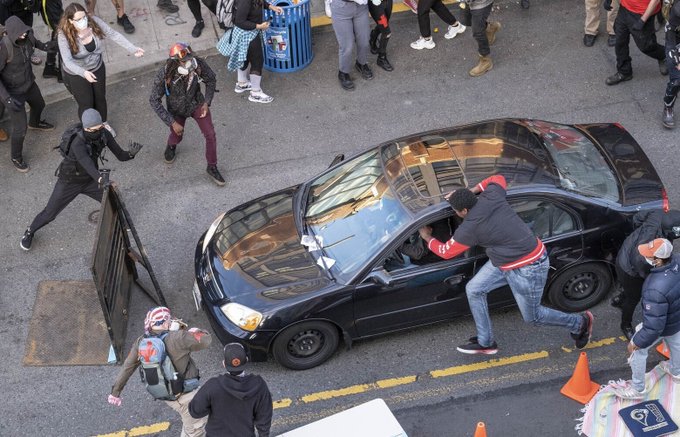 3,448 people are talking about this

Fernandez shot Gregory in the arm and then ran with his gun toward police and surrendered himself. From the video, it appears that he did everything he could to defend himself without overacting in that impossible situation and was genuinely scared. Yet he is being held on $200,000 bail, while the man who tried to beat him is being heralded as a hero. So now the law is actually punishing people for violating a checkpoint set up by the rioters. You are not allowed to come out of these incidents with your health intact.

This is rapidly becoming one of America’s foremost emergencies. Protesting in the name of George Floyd is becoming such a national religion that every dangerous and lawless act in its name is now being validated at the expense of everyone else’s rights to self-defense and peaceful movement.

Remember the Minnesota trucker who was beaten out of his truck and held for several days even though he was totally innocent and the victim of a mob? None of those who attacked him have been charged.

This all demonstrates that this has nothing to do with the cops. This is reverse Jim Crow, in which criminals are not prosecuted and victims are treated worse than the worst criminals, held without bond if they are viewed as defending themselves from BLM violence. In the Seattle case, it was a Hispanic man, who was recorded by King County jail as “white.”

Given his identity and how the videos seem to corroborate his side of the story, it’s hard to suggest that this was somehow a white supremacist attacker trying to purposely ram the crowd.

Some might suggest that the Seattle case is different because clearly the judge believed there was enough probable cause against Fernandez to hold him. However, given how much crime the judicial and political system is willing to overlook on behalf of the rioters and how disproportionately willing they appear to punish anyone perceived as opposed to the rioters, can we really count on justice in America? After all, if mob rule is justified enough to overcharge the Minnesota cops and allow rioters to block traffic and assault people without facing prosecution, not to mention be exempt from social distancing, can we trust the system any more?

Remember, the Minnesota trucker who was innocently ensnared in a riot was held for several days before finally being released. Nothing about this case demonstrates a likelihood that Fernandez had some sort of a premediated agenda to attack the protesters that day. He waited until after his car was attacked and he was punched to fire his weapon, and then when he left his vehicle holding his weapon, he made a beeline to the police. The statement of probable cause from police notes that “Fernandez repeatedly asserted that he was in fear for his life, and he had no way to escape, and he was going to be seriously harmed if he did not take the action he did.”

Consider the following: Bail for John Marshall, the man arrested for shooting Pruitt in the head in cold blood in Colorado, was set at just $60,000, even though there is no excuse for his behavior. He already bonded out. Whereas the bail for Fernandez was set at $200,000 for shooting someone in the arm in what appeared to be self-defense. Something doesn’t smell right.

What we are seeing today is a panic in our justice system, just as there was a panic in our health care system over the virus, in which civil rights are being suspended with breathtaking speed while everything is being done to serve the mob, including prosecuting an unprecedented number of cops – including black cops – while dropping charges against rioters.

This is either America or Fallujah. It’s time for Trump to work with the governors to keep our roads and highways free of “mostly peaceful” protesters who have no right to threaten motorists.

Sunday, May 31st, Was Chicago’s Most Violent Day in Sixty Years With 18 Murders