Watch: Trump Supporter Gives The Perfect Response When Spit On By A Unhinged Left Wing Protestor

Before the President’s rally in Minnesota, a supporter of President Trump was giving an interview with Vice News when he was spat on by a liberal protestor.

The supporter’s name is Dave Carlson who is a salesman in Minnesota and was speaking with Vice News explaining why he donates to President Trump. While speaking on camera a crazy left-wing protester spit in his face, Carlson’s response should be a model to us all.

The Vice News reporter was in genuine shock when another protester who witnessed what happened did apologize while Carlson was wiping the spit off his face.

Then another protester who was trying to take a picture arrived to explain why he thought it happened: “That’s not how people really feel; that’s f*cking disrespectful, but on the other hand, that shit is disrespectful as f*ck that too,” he said, pointing to Carlson’s hat.

What is really disrespectful is you inciting violence and attempting to bully us. You can spit on us, punch us, and try to intimidate us but, remember we get to vote in November; we will not be silenced. The American people are watching and they aren’t going to support a candidate that is endorsed by thugs like you. Americans are going to support a candidate that a good man like Dave Carlson supports, a man that’s not going to let thugs intimidate him. Thank you, Dave, for being a model to us all.

The Democrats and their thugs can do what they want…The silent majority is real and we will be heard just like we were heard in 2016. Trump supporters are good people, everyday Americans that make this country great. Not like these paid Democrat/Soros funded protesters that are sent to bully and harm Trump supporters to try and silence us. 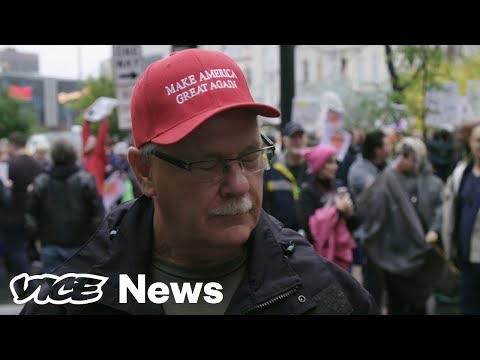