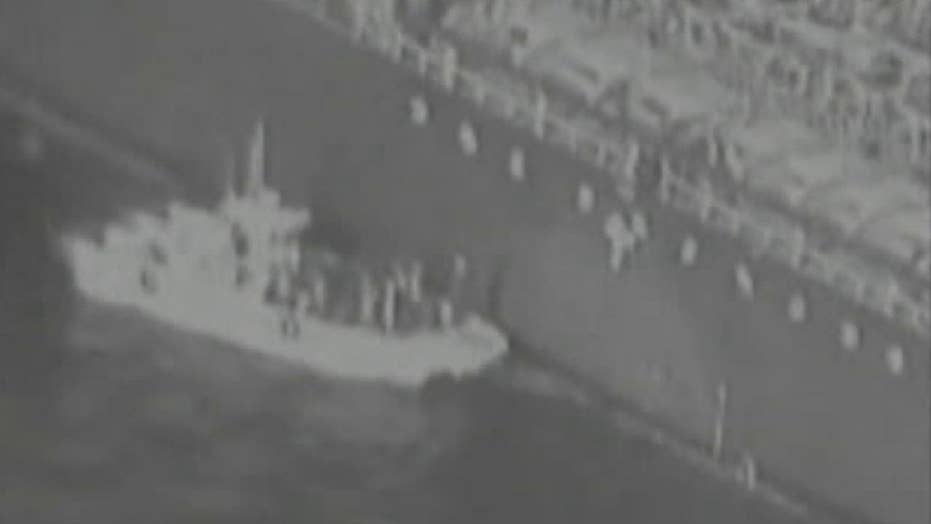 The Pentagon has released this video of an Iranian vessel removing an unexploded mine from a damaged Japanese-owned oil tanker.

President Trump pointed the finger at Tehran Friday for this week’s attacks on tankers in the Gulf of Oman, after the U.S. Navy released video purportedly showing an Iranian vessel removing an unexploded mine that had been attached to one of the tankers.

In an interview with “Fox & Friends” Friday, President Trump said of Iran’s alleged involvement: “We don’t take it lightly”.

“Iran did do it and you know they did it because you saw the boat,” he said, before pointing to video that showed an Iranian vessel removing an unexploded mine attached to a Japanese-owned oil tanker, the Kokuka Courageous.

Trump said the limpet mine had “Iran written all over it.”

“They’re a nation of terror and they’ve changed a lot since I’ve been president, I can tell you.”

The imagery released by the Navy came from the USS Bainbridge, a guided-missile destroyer which rescued 21 sailors from the stricken tanker. At least one other mine attached to tanker’s hull detonated, causing the blast. It happened near the strategic Strait of Hormuz, a key route for oil shipments in the region.

A U.S. official told Fox News an Iranian gunboat approached the Kokuka Courageous later in the day and removed the unexploded triangular-shaped limpet mine, the same type of mine used to damage four other tankers in the Gulf of Oman last month.

The official, who requested anonymity to discuss sensitive information, said the suspected Iranian vessel did not bear any flags, nor did the crew members wear any uniforms. But, the class of vessel, what the U.S. military has called a fast inshore attack craft (FIAC), was the same type of ship used by Iran to harass American warships in the Persian Gulf in recent years. 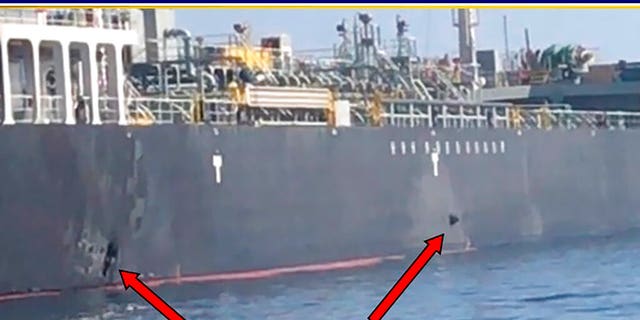 This June 13, 2019, image released by the U.S. military’s Central Command, shows damage and a suspected mine on the Kokuka Courageous in the Gulf of Oman near the coast of Iran. (U.S. Central Command via AP)

Other Iranian small boats have remained near the stricken oil tanker since the attack early Thursday, the official added.

The official said the order to abandon ship was given after the tanker’s captain spotted the unexploded mine, not because of the fire aboard the ship.

The Japanese owner of the Kokuka Courageous, appeared to contradict the U.S. version of events Friday however, saying the sailors on board saw “flying objects”, suggesting they could have been bullets. He disputed the idea that mines or torpedoes were responsible because the damage was above the ship’s waterline.

Another tanker, a Norwegian-owned vessel called the Front Altair, was also attacked in the Gulf of Oman Thursday. Its crew was being held in Iran, according to U.S. officials.

“This is what we’re out here for,” Cmdr. M. Kathryn Devin, the USS Bainbridge’s commanding officer, said of the rescues. “Our mission is to ensure maritime safety and to answer the call for aid when we can.”

At the State Department on Thursday afternoon, Secretary of State Mike Pompeo blamed Iran for the attacks on both oil tankers.

Iran’s U.N. Mission said its government “categorically rejects” the U.S. claim that it was responsible for the attacks and condemned it “in the strongest possible terms.”

In a series of tweets, acting Defense Secretary Patrick Shanahan praised Navy efforts to rescue those on the Panamanian vessel and called Iran’s “unprovoked attacks” a threat to international security and peace.

“Iran’s continued unprovoked attacks in the region are a threat to international security and peace and an assault against freedom of navigation on the open seas,” Shanahan posted.

ABOUT THE AUTHOR:
Lucas Tomlinson is the Pentagon and State Department producer for Fox News Channel. You can follow him on Twitter: @LucasFoxNews