VIDEO: Nancy Pelosi melts down on CNN, accuses Wolf Blitzer of being an ‘apologist’ for the Republicans

House Speaker Nancy Pelosi (D-Calif.) had a full blown melt down on CNN after anchor Wolf Blitzer pressured her on securing a deal for coronavirus relief for the American people. Blitzer asked Pelosi to respond to a tweet from her Democratic colleague, Rep. Ro Khanna (D-Calif.), about the failed negotiations between Republicans and Democrats to pass another relief bill.

“78 million can’t afford normal expenses. 40 million are at risk of eviction. 8 million small businesses might close forever. Dems can’t wait for the perfect deal. We have a moral obligation to get folks relief, now,” said Khanna in his statement.

Pelosi angrily criticized Blitzer for bringing up complaints from Khanna and others who she said had no idea about the negotiations.

“I didn’t come over here to have, so you’re the apologist for the Obama, excuse me, God forbid,” said Pelosi, clearly flustered.

“Madame Speaker, I’m not the apologist, I’m asking you serious questions because so many people are in desperate need right now,” responded Blitzer.

Blitzer went on to ask why Pelosi hadn’t talked directly to President Donald Trump about the negotiations.

“If the plural of anecdote is not data, yes there are some people who said this or that, overwhelmingly my caucus wants what’s right for the American people,” she added. “So do a service to the issue, and have some level of respect for the people who have worked on these issues, written the bill to begin with!”

The interview continued combatively until Pelosi accused Blitzer of being disrespectful to Democrats.

“You evidently do not respect the chairmen of the committees who wrote this bill, and I wish you would respect the knowledge that goes into, getting, uh, meeting the needs of the American people. But again, you’ve been on [unintelligible] defending the administration all this time with no knowledge of the difference between our two bills, and I thank you for giving me the opportunity to say that to you in person,” said Pelosi, smiling sarcastically.

Blitzer tried to close out the segment, but Pelosi kept interrupting and scolding him.

Here’s the video of Pelosi’s melt down:

A CNN chyron aired Thursday said Democrats who received mail bombs this week are “Trump’s targets” — hours after an anchor insisted “no one’s blaming the president.”

“Manhunt For Serial Bomber Going After Trump’s Targets” read the CNN chyron at about 1:13 PM. This came after another chyron that also referred to those targeted as “Trump Targets.”

CNN’s Wolf Blitzer ended the segment by saying, “The one common thread between all of these bombs–all of those who are being targeted are President Trump’s frequent punching bags.”

And just one hour before this segment, the network’s chyron suggested that Trump bears “responsibility” for “inciting” the perpetrator to send these packages — but alleges the president is not owning up to it. 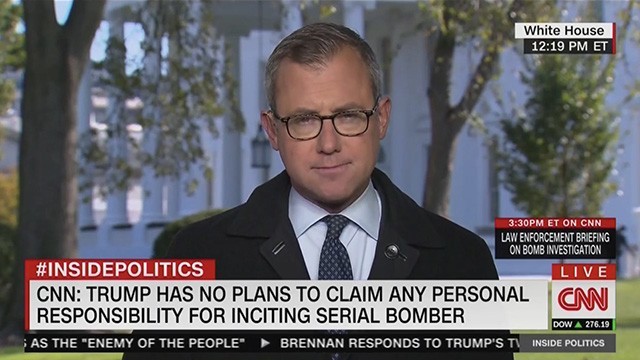 Although CNN personalities have repeatedly said that they are not blaming Trump or his supporters for the mail bombs, they have emphasized several times that those targeted by the bombs were frequently criticized by Trump and by right-wing media.

Brian Stelter said Wednesday that the targets of the bombs “have all been criticized mercilessly by right-wing outlets.”

CNN analyst Josh Campbell also insisted Wednesday that Trump’s rhetoric may still be to blame for the mail bombs, even if the perpetrator is mentally ill.

“If the package bomber turns out to be someone with mental health issues, that doesn’t mean Pres. Trump is off the hook. If it turns out the bomber was motivated to kill perceived enemies based on recent heated political attacks by officials, those spewing hate share the blame,” he said.

Lanny Davis Promised CNN he had the goods on President Trump, but Lanny had to admit he had nothing and still CNN won’t retract the story. 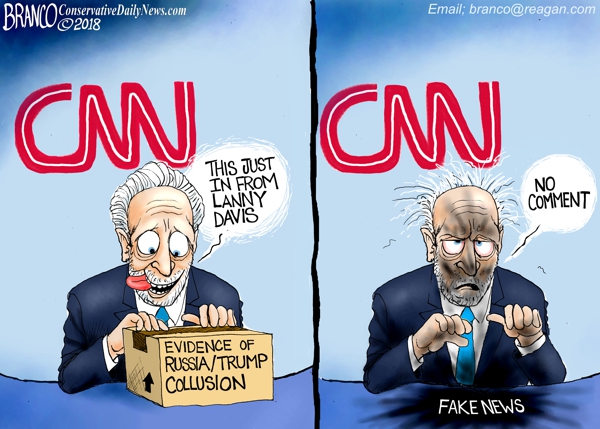 Where do you Stand?

Democrats seem to be running against American citizen’s safety and well being with their push for open borders. 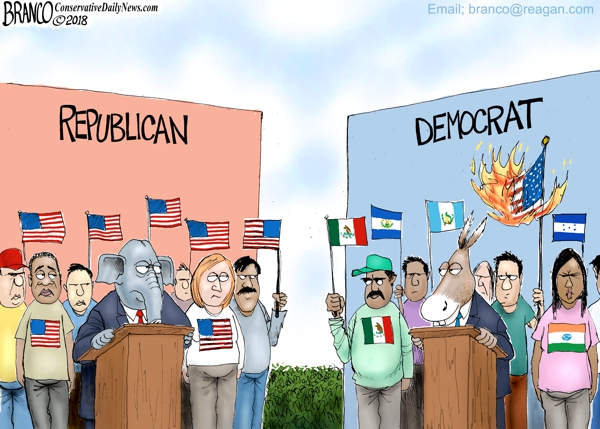 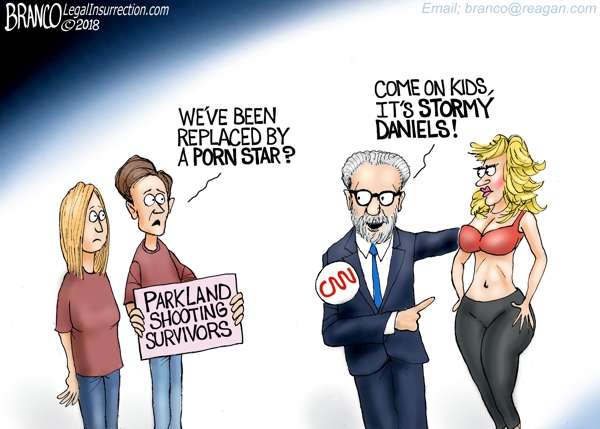 Will CNN and the rest of the Mainstream media ever give up on this phony Russia-Trump Collusion story? 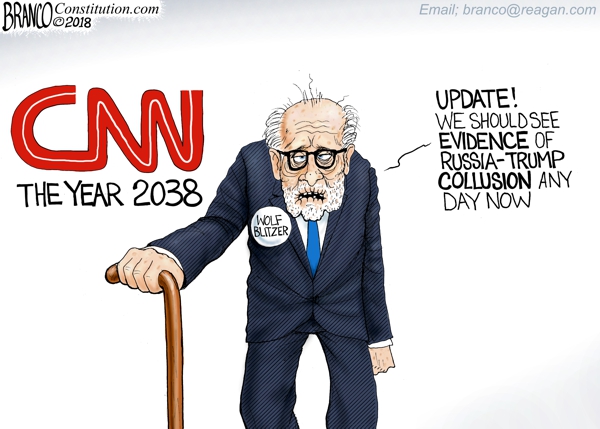 “Is a vigil a protest?” Sharpton asked during a telephone interview with Reuters. “Is a rally?” he added.

According to Reuters, Sharpton called de Blasio’s plea “an ill-defined request.” Sharpton indicated that he is going ahead with planned prayer vigils at the scene of Eric Garner’s death and other scheduled events with the Garner family.

Joining Sharpton in criticizing the mayor’s request is war and racism activist group Answer Coalition. As reported, they said suspending protests would be “outrageous” and would put a “chill” on free expression.

On Monday, de Blasio encouraged his city to hold off any protests until after the funerals of officers Rafael Ramos and Wenjian Liu who were killed execution-style in their patrol car by a black man avenging the death’s of Garner and Michael Brown:

It’s a time for everyone to put aside political debates, put aside protests, put aside all of the things we will talk about in due time.

Outside of the president, Al Sharpton might possibly be the most powerful man in America right now. And no, that isn’t an overstatement.

Think about what the 60-year-old activist and MSNBC host has going for him right now:

Power Indicator #1: Sharpton has been to the White House to advise President Barack Obama, his senior advisor Valerie Jarrett, or both. No big deal, right? Plenty of MSNBC hosts have visited over the past six years.

Care to guess, according to the White House Visitor Log, just how many times Sharpton has visited since Mr. Obama took office? Five times? Nope. 15 times? Try again. 25 times? Getting warmer. He’s visited at least 35 times. Quite the feat considering Sharpton is an unelected official living about 250 miles away from DC.

Do you think any other civilians have that kind of frequent access?

Power Indicator #2: Nobody controls him. Need proof? Just look at all the protests happening Tuesday night around New York after his former BFF, Mayor Bill de Blasio, asked him to cease and desist until after the two slain Brooklyn officers were laid to rest later in the week. This isn’t a compliment, but Sharpton showed once again he doesn’t take orders from anyone.

His approval rating among blacks stands at 69 percent (yes, Quinnipiac conducts polls on Sharpton despite him not receiving one vote to represent any district or state). And when city residents were asked in the same poll who their most important leader was, Sharpton finished first, beating even President Obama and longtime Rep. Charlie Rangel in the process.

Talk about polarizing: Almost 80 percent of black people say he’s been a positive force for the city. Almost 60 percent of Democrats feel the same way. But 81 percent of Republicans say he’s been a negative force. How does Sharpton become the epicenter in every story involving race? Simple: He looks at those numbers and knows he can play one side against the other and puts himself in a position of power accordingly. Understand: The only contingent Sharpton cares about is that of the African-American community. Protecting his brand among blacks is the only thing that matters.

Power Indicator #3: Sharpton has a national television platform for a full hour Monday through Friday on MSNBC. For Sharpton, it’s just a daily trip to the podium. Opposition? Dissent? You’re kidding, right? Sharpton is almost never challenged by his guests because they’re booked based on the premise of agreeing with the host on whatever topic is being discussed. And as stated here on a few occasions, echo chambers never make for compelling television, and the Nielsen numbers for Sharpton’s PoliticsNation especially reflect that sentiment.

Despite being in the middle of many of the biggest stories of the year, the Rev’s return on investment is equal to whatever the ruble is trading at these days. On Monday, for example, on a day where his name was front and center again following the reaction to the execution of two police officers in Brooklyn, Sharpton’s program couldn’t generate even half the audience in the key demo of Wolf Blitzer on CNN, who finished a distant second to Fox’s Special Report (guest anchored by John Roberts that evening). Overall, Sharpton gets beat anywhere from 2-1 (CNN) to 3-1 and even 4-1 by Fox. So despite the spotlight he seems to generate outside of 30 Rock, he can’t seem bring that interest over to his program. And here’s why…

From a critical perspective, Sharpton is as awkward to watch as anyone on television. He’s simply terrible in a host role despite more than three years of at-bats to improve. If you can find even one notable critic who believes otherwise, please send along that review.

So if the ratings are bad and the delivery even worse, why and how does Sharpton still have a program on the air? Answer: Because Comcast and NBC — and this is just an educated guess — must be petrified to fire him (by, yes, the race card being turned against them). Remember, Sharpton gave his crucial blessing to the Comcast/NBC Universal merger a few years back. Not long after, he was magically given his own show at 6:00 p.m. on MSNBC. Reciprocity at its finest.

Power Indicator #4: Unlike the rest of us, he’s excused from paying taxes. Per a November story in the ultra-right-wing New York Times, he owes $4.5 million (and growing) in current state and federal liens against him and his National Action Network. More on that:

Mr. Sharpton and the National Action Network have repeatedly failed to pay travel agencies, hotels and landlords. He has leaned on the generosity of friends and sometimes even the organization, intermingling its finances with his own to cover his daughters’ private school tuition.

Sounds pretty serious. So will he be prosecuted? No. Will he still have the president’s ear? The Rev knows he’s teflon on this given his friends at the top of the food chain in D.C., and willingly flaunts being above the law and even common decency.

And nobody dares challenge him.

The president notwithstanding, Sharpton appears to be the most powerful man in America right now. Just ask Amy Pascal at Sony if she agrees. As we see time and again, he can do and say whatever he wants, and even has a national megaphone on one cable network to spread his message. The White House might as well be a second office listed on Sharpton’s business card. Meanwhile, debts of all stripes and sizes simply go unpaid. Bill de Blasio wins with 72 percent of the vote, or 72 percent more than Sharpton received, but guess who really runs the show in the Big Apple?

Regardless of whether you agree with Sharpton or not, he owns the kind of political power that no other unelected public figure in this country has seen possibly since Capone. And before you say it can’t last forever, keep in mind he is coming up on three controversial decades as a public figure.

In other words, he ain’t going anywhere.