It takes a special kind of stupid to have your would-be Political Magnum Opus mocked so badly that it’s scrubbed from your website hours after launch, with you and your own communications officials blaming the *other* team for ‘misinformation’ about direct quotes taken from it? Because that’s where we find ourselves in our continuing story today, kiddies.

When we met last week, you will remember, Miss. Occasional Cortex was basking in the praise of the 67 Democrats (read: Socialist dupes) signed on to her “Green New Deal”. That list includes several Presidential hopefuls.

Meanwhile, the Right (and even some Leftists who haven’t signed up to get their lobotomy scars yet) laughed it right off the stage Naturally, we took our turn, too. Here’s one excerpt:

Remember that old joke Q. “what did Socialists use before candles?” A. “Electricity”

(FYI: The above article ends with screenshots of the FAQs from her own website. The same ones that were later pulled down.)

By the afternoon of Feb. 7, Ocasio-Cortez, D-N.Y., removed the document from her website without explanation but following backlash and even ridicule over the radical plans outlined within it, including a call to “eliminate emissions from cows or air travel” — which would functionally ban the latter — and to provide “economic security for all who are unable or unwilling to work.”
Source: WashingtonExaminer

This was the same day they went live, for those keeping score at home.

At first, they pretended the points Tucker objected to weren’t even IN the proposed ‘Green New Deal. (Spoiler alert… they were.)

Robert Hockett, professor of law and finance at Cornell University, appearing on “Tucker Carlson Tonight,” called the contents of the now-missing blog post “some kind of document that somebody other than us has been circulating.”

Hockett said Ocasio-Cortez does not endorse the idea of paying people “unwilling to work” and does not want to ban airplane travel.

He said Ocasio-Cortez “tweeted it out to laugh at it.”

He added, “It seems apparently some Republicans have put it out there.”
Source: WashingtonExaminer

“It was the REPUBLICANS!”

The lie didn’t stand up very well to scrutiny. 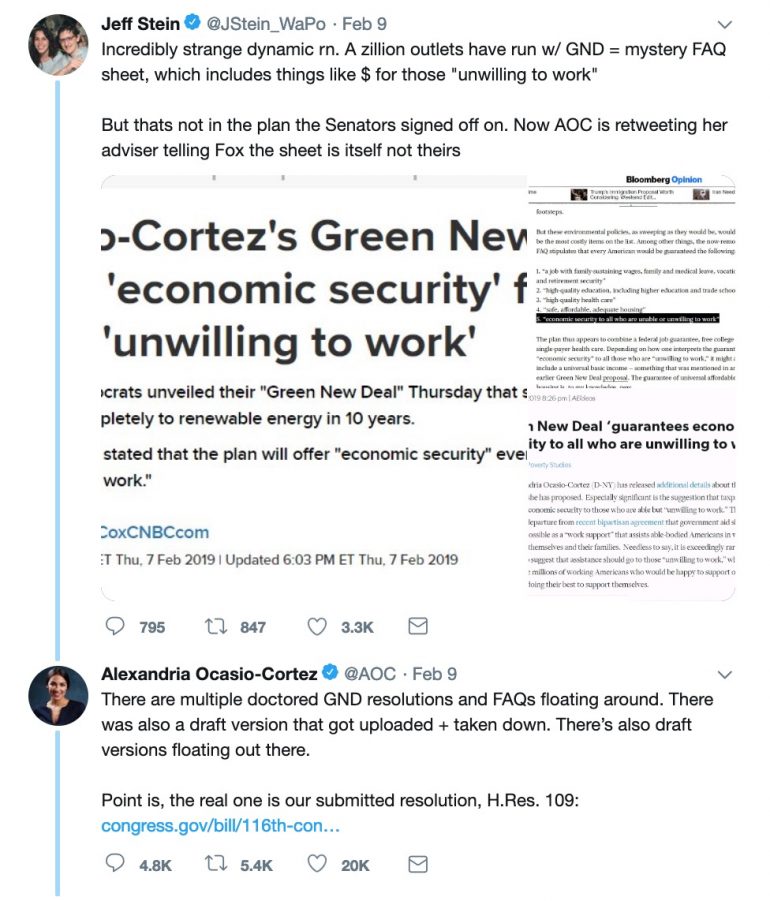 In today’s tech-savvy generation, there’s a small problem with playing the ‘blame game’ in suggesting something has been doctored. If you know what you’re doing, the fact-checking doesn’t take any special insider access or knowledge.

Here’s her team getting caught in a lie:

But on Saturday morning, chief of staff Saikat Chakrabarti tweeted that the FAQ page was indeed posted by the Ocasio-Cortez staff but was done so in error. He called the page “an early draft of a FAQ that was clearly unfinished and that doesn’t represent the GND resolution got published to the website by mistake (idea was to wait for launch, monitor q’s, and rewrite that FAQ before publishing).”

Ocasio-Cortez later Saturday admitted the same, tweeting at a Washington Post reporter, “There was also a draft version that got uploaded + taken down. There’s also draft versions floating out there.”
Source: WashingtonExaminer

Ocasio-Cortez again referred to “doctored versions” in her Saturday tweet, though she did not address why the original post on her website, which initially said “we aren’t sure that we’ll be able to fully get rid of farting cows and airplanes that fast” and was apparently later updated to instead include the emissions language, was edited and removed.

As for the blog post, it has not been restored to her congressional website as of Saturday morning but is available via archive and its text saved online.
Source: WashingtonExaminer

And I would have gotten away with it too, if it hadn’t been for you meddling kids!