Support building for Republican resolution to authorize military force against Mexican drug cartels, eviscerate those behind the fentanyl crisis

Republican congressmen introduced a resolution earlier this month to authorize American military action against the terroristic drug cartels that have overwhelmed Mexican government forces and trafficked the number one killer of adults 18-45 into the United States. That resolution is fast gaining support in the House.

Reps. Mike Waltz (R-Fla.) and Rep. Dan Crenshaw (R-Texas) introduced a resolution on Jan. 12 to “authorize the use of United States Armed Forces against those responsible for trafficking fentanyl or a fentanyl-related substance into the United States or carrying out other related activities that cause regional destabilization in the Western Hemisphere.”

TheBlaze previously reported that fentanyl is the leading killer of adults ages 18-45. 10% of the significant drop in life expectancy recently noted in the U.S. has been attributed to the corresponding spike in opioid overdoses, which exceeded 80,000 in 2021. Rep. David Trone (D-Md.) said in September that “It’s equivalent to one 737 (jet) every day going down, no survivors. It’s a mind-boggling number of deaths.”

According to the Centers for Disease Control and Prevention, from 2019 to 2020, opioid-involved death rates increased by 38% and synthetic opioid-involved death rates went up by 56%. The Congressional Joint Economic Committee concluded last year that the financial damage of the opioid crisis, after adjusting for inflation, carried a cost to the U.S. economy in 2020 of approximately $1.47 trillion, representing a $487 billion increase over 2019 and a 37% increase from 2017.

Waltz said in a statement, “It’s time to go on offense.”

“Not only are these paramilitary transnational criminal organizations responsible for killing an unprecedented number of Americans, but they are actively undermining our sovereignty by destabilizing our border and waging war against U.S. law enforcement and the Mexican military,” added the Florida Republican.

Crenshaw claimed that the cartels are at war with the U.S., “poisoning more than 80,000 Americans with fentanyl every year, creating a crisis at our border, and turning Mexico into a failed narco-state.”

“It’s time we directly target them,” said Crenshaw. “We cannot allow heavily armed and deadly cartels to destabilize Mexico and import people and drugs into the United States. We must start treating them like ISIS – because that is who they are.”

The “Authorization for Use of Military Force Cartel Influence Resolution” would enable the president to lay waste to the cartels. According to the legislation, the criminal groups fit for annihilation include the: Sinaloa cartel; Jalisco New Generation cartel; Gulf cartel; Los Zetas cartel; Northeast cartel; Juarez cartel; Tijuana cartel; Beltran-Levya cartel; and La Familia Michoacana or Knight Templar cartel.

“Unless this situation changes and we take back control from the cartels, for the trafficking coming across our border, it will only get worse,” said Lines.

The cartels whose drugs have killed hundreds of thousands of Americans are getting increasingly brazen, especially as the efforts by Mexican military and police force repeatedly prove wanting, despite receiving billions of dollars in assistance from the U.S. since 2006.

The Council on Foreign Relations noted in a report last year that Mexico has seen over 360,000 murders since 2006, when the government declared war on the cartels.

Parts of the country were transformed into warzones.

Waltz told Fox’s “Sunday Morning Futures” earlier this month, “They are defeating the Mexican army. These are paramilitary entities with billions and billions at their disposal.”

Extra to dealing in death and violence, the cartels have also exacerbated the crisis at the border. Arizona Republic reported in December that cartels “have increased their involvement in migrant smuggling over the past decade, transforming the operation into a multibillion-dollar enterprise.”

They have played a significant role in violating American sovereignty by helping to smuggle illegal aliens into the U.S. U.S. Customs and Border Protection indicated that so far, this fiscal year, over 717,660 illegal aliens have stolen across the border. 2.37 million were encountered crossing the border last year, and another 1.7 million were reported crossing the year before.

Recognizing the need to put these cartels in the ground, Reps. Jake Ellzey (R-Texas) and Beth Van Duyne (R-Texas) signed on to cosponsor the legislation on Jan. 17. Just the News reported that Rep. Jim Banks (R-Ind.) will similarly cosponsor the resolution. To go into effect, the resolution must be passed by both the House and the Senate and then signed by the president.

It is unclear what impact this war measure will have on China, America’s preeminent adversary, which is reportedly involved with the cartels’ manufacture of fentanyl. According to Craig Singleton, senior fellow at the nonpartisan Foundation for Defense of Democracies, “since approximately 2013, China has been the principal source of the fentanyl flooding America’s illicit drug market.” The Republican Study Committee in the previous Congress indicated that “a significant portion of China’s fentanyl manufacturing … moved to Mexico where cartels set up their own operations to produce fentanyl using precursor chemicals from China.”

The U.S. Drug Enforcement Administration has announced that it seized more than 50.6 million fentanyl-containing “fake prescription pills” and in excess of 10,000 pounds of fentanyl powder during the 2022 calendar year — the DEA laboratory estimated that this amounts to greater than 379 million possibly lethal doses of the dangerous drug.

Fentanyl “is a highly addictive man-made opioid that is 50 times more potent than heroin,” according to the DEA’s press release, which also said that a mere two milligrams of the drug is viewed as a potentially lethal dose.

“These seizures – enough deadly doses of fentanyl to kill every American – reflect DEA’s unwavering commitment to protect Americans and save lives, by tenaciously pursuing those responsible for the trafficking of fentanyl across the United States,” DEA administrator Anne Milgram said, according to the press release. “DEA’s top operational priority is to defeat the two Mexican drug cartels—the Sinaloa and Jalisco (CJNG) Cartels—that are primarily responsible for the fentanyl that is killing Americans today.”

The press release noted that “Most of the fentanyl trafficked by the Sinaloa and CJNG Cartels is being mass-produced at secret factories in Mexico with chemicals sourced largely from China.”

DEA laboratory testing this year found that six out of 10 fentanyl-containing fake prescription pills included a possibly deadly amount of fentanyl, according to the government agency, which also noted that it seized more than twice as many of the fentanyl-laced pills in 2022 as it did in 2021.

The pills are created to appear the same as genuine prescriptions, but include filler and fentanyl and are frequently lethal, according to the DEA.


A.F. Branco Cartoon – None So Blind

Democrats, RINOs, and Biden are blind to the devastation of their open-border policy.

A.F. Branco has taken his two greatest passions, (art and politics) and translated them into cartoons that have been popular all over the country, in various news outlets including NewsMax, Fox News, MSNBC, CBS, ABC, and “The Washington Post.” He has been recognized by such personalities as Rep. Devin Nunes, Dinesh D’Souza, James Woods, Chris Salcedo, Sarah Palin, Larry Elder, Lars Larson, Rush Limbaugh, and President Donald Trump.


A.F. Branco Cartoon – The Other Washington

Out with the old in with the new with Tiffany Smiley bringing fresh new ideas over Patty Murray’s stale old socialist policies.

The Mexican cartels are said to be bringing terror across our border and throughout the country.

Fentanyl coming from China through Biden’s open border has killed over 107,000 Americans this past year.

The drug fentanyl has its uses. They gave it to me briefly after surgery. But it’s become the suburban junkie’s favorite way to OD and the stuff is deadly.

The U.S. Customs and Border Patrol just seized the largest haul of fentanyl in U.S. history… enough to kill over 57 million people. It was under the floorboards of a tractor-trailer hauling cucumbers while trying to cross the Mexican border at Nogales. A drug-sniffing dog was their downfall. Tucker Carlson broke the story.

“Well, the U.S. border patrol has made the biggest fentanyl bust in history. An enormous amount, enough fentanyl to kill—they estimate—57 million people. That’s more than the combined population of the states of Illinois, New York, and Pennsylvania. It’s a lot,” Carlson stated.

“We got our hands on an internal memo from U.S. Customs and Border Patrol that details this bust. The biggest fentanyl seizure in U.S. history,” Fox News Correspondent Hillary Vaughn stated. “According to the memo, four days ago in Nogales, Arizona, at the port of entry, CBP officers stopped a tractor-trailer crossing the U.S.-Mexico border into the U.S. with enough fentanyl to kill 57 million people. That’s plenty of fatal doses to wipe out the entire populations of Texas, Arizona, and New York state combined.”

“The shipment was referred to secondary, where an intensive examination revealed the contraband concealed within the trailer floor,” CBP said in a report. Authorities said it was driven by a 26-year-old man who was arrested and charged with possessing drugs with the intent to distribute them.

“They found this under the floor of the trailer. They found 114 kilograms of fentanyl. According to the DEA, just two milligrams is considered a lethal dose. They also grabbed 179 kg of methamphetamine and one gram of fentanyl in pill form. The street value for the fentanyl was over $102 million. The CBP officers arrested the smuggler, a Mexican national who attempted to drive the drugs across the border. The suspect was a part of the DHS’ trusted traveler program called FAST, that stands for free and secure trade for commercial vehicles. The program started after 9/11.”

The Chinese produce fentanyl and sell it to us. I don’t know if it’s being produced by the cartels in Mexico but it’s sure being moved and sold by them. This is just one shipment… imagine what we’ve missed that is already here.

This drug bust comes just as President Trump is trying to secure the funding for the border wall for national security purposes. It would also put a stop to a lot of the drug and human trafficking going on here. The Democrats call the wall “immoral.” What do you call enough drugs to kill 57 million Americans? I call that criminal and murderous as fentanyl killed approximately 28,400 Americans in 2017. According to the Drug Enforcement Administration, the drug is up to 100 times stronger than morphine.

Many times drug users buy fentanyl thinking its heroin and then OD on it. Most of the illicitly produced fentanyl in the United States comes from Mexico evidently. That wall can’t go up soon enough. 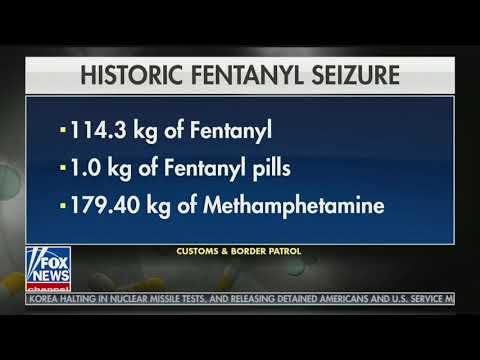