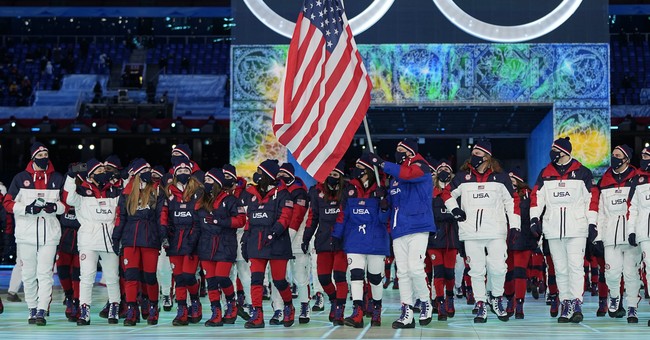 Vincent Zhou, the world-class figure skater forced to pull out of the Olympics because of COVID, can thank Anthony Fauci and our COVID-crazed media for his withdrawal.

“It seems pretty unreal that of all the people, it would happen to myself. … I have been doing everything in my power to stay free of COVID since the start of the pandemic. I’ve taken all the precautions I can. I’ve isolated myself so much that the loneliness I felt in the last month or two has been crushing at times.”

His story is heart-wrenching not only because of his compelled withdrawal from the individual competition — and the loneliness he endured — but because our “public health authorities” lied to Zhou, leading him to do exactly the opposite of what he should have been doing to build up his immune system before the Winter Games.

Maybe nothing could have protected him — he was, of course, fully vaccinated — but the safest course would have been to expose himself to everything in 2021, not be the Boy in the Bubble. If only he’d gotten omicron back in December, like everybody else, his immune system wouldn’t have been a sitting duck for the tiniest whiff of COVID once he got to Beijing.

As Dylan H. Morris, a postdoctoral RNA virus researcher at UCLA, put it: “If you want to stay out of the hospital, giving your immune system a preview of the virus is valuable, even if that preview isn’t perfectly accurate.”

A few months into the pandemic, two basic models emerged for responding to COVID:

1) Make it endemic. Also known as “herd immunity” or, pejoratively, “Let ‘er rip!” Georgia and Florida, among other states, cautiously followed that path, as did the nation of Sweden.

2) Lock down the populace in order to prevent a single COVID molecule from ever drifting within 10 yards of a human being. Remember “Fifteen days to stop the spread!”? In the blue states, two weeks became two years — finally being abandoned this week only because Democrats fear the coming elections.

RESULT: Places that pursued the endemic route did no worse, and often quite a bit better, than the fascist lockdown states. Apart from preventing hospitals from being overwhelmed when the virus first hit New York, no benefit was derived from strict COVID policies.

The reason the virus hit so hard in 2020 was that our immune systems had never encountered anything like COVID before. “[T]he population was immunologically naive,” explained statistician Philippe Lemoine, “which means that nobody had immunity against it.” It’s the same reason Native Americans were annihilated by viruses that Europeans had lived with for centuries. Now their immune systems recognize those viruses, too.

Training your immune system to recognize the virus, through vaccination or the real thing, reduces the severity and duration of future infections. Additional exposures give the body practice dealing with the various twists and turns of each new variant. Avoiding contact with viruses to protect your immune system is like avoiding weight-lifting to protect your muscles.

The Scientist magazine, among others, has pointed out that there’s little reason to believe that omicron is actually less dangerous than delta; it just seems so because our immune systems now recognize COVID and are able to quickly kill it.

Zhou might have known all this, but whenever epidemiologists tried to tell us that, our “public health authorities” and doomsday media buried the dissenters in scorn and calumny. Back on Oct. 4, 2020, Dr. Martin Kulldorff of Harvard University, Dr. Sunetra Gupta of Oxford University, and Dr. Jay Bhattacharya of Stanford University produced The Great Barrington Declaration, pushing the endemic solution. Soon, thousands of scientists had signed the paper. Today, nearly 1 million have.

Four days later, on Oct. 8, 2020, Francis Collins, President Trump’s director of the NIH, emailed “The Science” Fauci, frantically warning that the declaration was getting too much attention! He urged a rapid response to discredit the signatories — one a Nobel Prize-winner in chemistry — and “take down” the paper’s ideas.

“The Science” permits no debate! (Though I suppose we’re lucky Collins merely called the renowned epidemiologists “fringe,” and not “white supremacists.”)

Governors, like Ron DeSantis in Florida, who listened to the epidemiologists rather than “public health authorities” were reviled by our media, amid florid predictions of disaster.

In April 2020, when Gov. Brian Kemp of Georgia began lifting COVID restrictions, the Atlantic magazine blasted him with the headline: “Georgia’s Experiment in Human Sacrifice.” Longtime reporter Ron Fournier wrote: “Mark this day. Because two and three weeks from now, the Georgia death toll is blood on his hands.” (Take note, deplorables: Trump jumped on the bandwagon and publicly criticized Gov. Kemp for opening up, too.)

About the same time, Gov. DeSantis also began easing restrictions. For this, the media dubbed him “Death-Santis.” The New Republic titled an article on April 10, 2020, “God Save the Florida Governor From His Stupidity.”

RESULTS: A month later, COVID cases in both states had declined, while cases continued to rise in the majority of other states.

Maybe that was a fluke. What’s the final score, two years later?

As of a week ago, among all 50 states, Georgia was ranked 15th in age-adjusted COVID deaths, well below communist-controlled New York and New Jersey. Florida was in the bottom half of all states, coming in at No. 31. Only 19 states did better.

As for Sweden, MSNBC and President Trump spoke as one in denouncing that country’s refusal to shut down. On April 20, 2020, Trump tweeted that Sweden was “paying heavily for its decision not to lock down.” A week ago, Sweden ranked 20th out of 31 nations in Europe in COVID deaths. Only 11 countries did better.

Even a tie score should go to the free states because their citizens didn’t have to stop living, learning, eating in restaurants, going to concerts, athletic events and on and on.

Not only did Armageddon not ensue in the free states, but their populations’ immune systems aren’t at risk of collapsing the next time a germ wafts their way. You know all those weird allergies to things like peanuts that didn’t exist 20 years ago? Wait until the kids who’ve spent their childhoods in masks encounter the Earth’s atmosphere again!

Naturally, there will be no consequences for our “public health authorities” who imposed cruel mandates and squelched opposing views: You can’t sue the government.

The rule should be that whenever our rulers claim emergency powers to impose draconian measures on the populace, they forfeit sovereign immunity. I know some epidemiologists who would be good expert witnesses for the lawsuits.

The Rise in Burglaries in the wealthiest communities is directly connected to the weak law enforcement policies of Democrats.

A.F. Branco Cartoon – Under the Table

Pelosi, whose family has gained financially from China warns Olympic athletes against saying anything bad against China.

Corporate America and the Democrats are selling out our humanity in exchange for China’s money.

NBC and the world seem to have no problem embracing the China Olympics though they use slave labor.