Candace Owens – a black conservative – takes a page from President Donald Trump’s playbook when encountering unhinged liberals: she is fearless.

Her career, at the tender age of 28, has accelerated to the point of making the Nancy Pelosis and Chuck Schumers very nervous, given her growing national popularity to ignite ideological warfare among leftist-indoctrinated blacks, including Millennials on college campuses.

She treads where few conservatives are willing to go, especially white Republicans.  “We need to get off the Maxine Waters plantation,” says Owens, taking aim at one of the most accomplished race-baiters in the Black Caucus.  The new concept, says Owens, is to hold Democrats “accountable” for their “shameful” record of service to America, speaking as communications director of Turning Point USA.

Waters’s abysmal political career of 27 years (repeat: 27 years) remains enshrined in a district (Compton, Calif.) teeming with local corruption and shocking levels of criminal activity.  “She lives in her $6 million mansion (in Hancock Park) while black people continue to suffer,” Owens adds.  “And all she does is talk about race.  Black leaders are engaged in the race business.”

Ardent leftists – who ignore her dismal record – can’t get enough of “Auntie Maxine” devoting so much of her time to hyper-partisan views on racial inequality and calling for the president’s impeachment.

It’s a good thing Owens loves going after the race-baiters, because she encounters more than her fair share on college campuses.  Her rare brand of talking points for Millennials to change their victim mindset – especially students of color – doesn’t always receive the warmest reception.  “Why are you screaming about Jim Crow and slavery?” asks Owens of students waving “Black Lives Matter” signs at a recent UCLA speaking engagement.  “You didn’t live through anything.  You’re just a bunch of over-privileged Americans.”

Her appearances are now igniting national debate, spilling over into better polling numbers for President Trump.  Famous rapper Kanye West posted his support of Owens on social media, triggering responses from millions of supporters and haters.  All the commotion was over the rapper’s one-line endorsement: “I like the way she thinks.”

President Trump thanked Kanye for stepping out of the groupthink tank among blacks, and the commander-in-chief watched his polling numbers of support nearly double among black males.

Democrats are right to be nervous because Owens, and black conservatives like her, keep driving a stake through the heart of Democratic messaging.

“You’re never getting off the federal plantation talking about the past,” Owens said, debating a group of BLM flag-wavers at her UCLA talk.  “I don’t know why people embrace being oppressed.  It is so embarrassing.  You act like ‘I love being oppressed.’  You can either be a victim or a victor.”

Her last line provoked a rarely witnessed cultural shift among students breaking into applause for the young speaker – signaling their choosing the label of “victor” over “victim.”  It most likely was disorienting for the BLM hecklers to be challenged as alleged “victims” while shouting out insults in a seemingly safe space for race-baiting: academia.

No subject appears off limits in Owens’s world.  She now has been committing the unthinkable by challenging the legacy of a political leader deemed untouchable in her minority community: former president Barack Obama.

Owens had the temerity to suggest, “We have so many great results in the black community because of Donald Trump” and not Obama, ticking off the unprecedented regulatory rollback, corporate tax cuts, and record low unemployment rates.  “Black people are starting to wake up[.] … We need new black leadership.”

“I don’t think we should spend any time putting down Obama,” said a political opponent during an open-forum panel that later appeared on YouTube.  “We made progress under a black president.”

Owens’s insights on Obama are tantamount to treason among many in her community, but she plows ahead, oftentimes trampling on liberal sensitivities.  “For so long we’ve been convinced the photo opportunity of Beyoncé and Jay-Z was something,” says Owens, referring to the constant stream of black celebrities invited to the Obama White House.  “It meant absolutely nothing.”

“They [Democrats] have erected a mental prison for all of us,” she tells black students at many of her college stops.  “When someone runs off the Democratic plantation, they [liberals] send the dogs out.”

One can’t help but wonder whether Owens’s ancestors were among the first to throw off the “mental shackles” of slavery (the worst kind) and escape the plantation life, without so much as a glance backward.

Kanye West and Candace Owens appear to be free from the crippling liberal chains that bind many in the black community and the groupthink that comes with it. 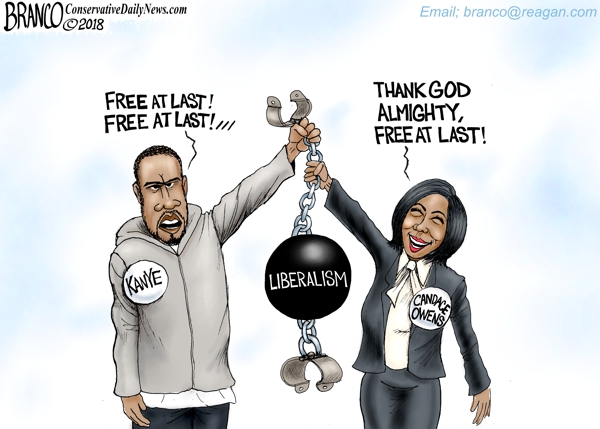 Political cartoon by A.F. Branco ©2018
A.F. Branco
Antonio F. Branco was born in 1956 in Fort Bragg, California, and raised in the small California logging town of Point Arena. He joined the US Army MP Corps in 1975 and was honorably discharged in 1978.
Branco attended Woodland Hills college briefly before moving to the Northwest. His beginnings in cartooning came while working at a sawmill in Sedro-Woolley, Washington.
His ability to frame life in picture created a humorous environment, depicting his bosses and coworkers in exaggerated, but realistic scenarios.
A.F. Branco has taken his two greatest passions, (art and politics) and translated them into the cartoons that have been seen all over the country, in various news outlets including “Fox News” and “The Washington Post.” He has been recognized by such personalities as James Woods, Sarah Palin, Larry Elder, Lars Larson, and even the great El Rushbo.