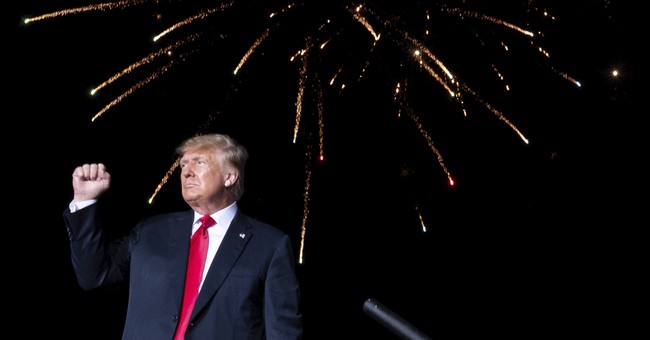 If you really, really miss Donald Trump, MSNBC may just be for you! Biden is cratering, fuel prices are skyrocketing (hey, anybody seen Greta Thunberg?), hundreds of thousands of illegal aliens are pouring across our border, and the murder rate keeps hitting historic highs. But the establishment media can’t stop talking about TRUMP.

So for my friends in the media, here are a few thoughts on your Trump obsession.

Rep. Liz Cheney, daughter of Dr. Evil, has become an unlikely hero among the Can’t-Get-Enough-Trump media — because she can’t stop talking about Trump either.

— Trump is hurting the GOP (true: He endorsed Stacey Abrams and says his voters won’t come out in 2022 and ’24 if Republicans don’t make the “Presidential Election Fraud of 2020” their No. 1 issue); and

— Trump is lying about the Arizona recount (also true).

But then she had to add: Oh, and now I’m for gay marriage! Isn’t Bush the greatest?

Is there a political party for people who think Jan. 6 was dumb, notice that we don’t have a wall, and can read an election report, but still say Bush is a male bimbo and pretty much everything liberals said about him was true?

“Trumpism Without Trump” is the winning formula. We’re keeping the policies, but getting rid of the 8-year-old.

The main lesson out of the Arizona election hand recount a few weeks ago isn’t about the election at all. It’s that media misinformation is a serious problem in a democracy.

We got some very confusing messaging on the results of the recount. First, there were headlines all over saying it resulted in Biden winning again. I didn’t really care one way or another, except then Trump started going around claiming that the hand recount clearly showed … HE WON!

It’s a simple yes-or-no question: Did Trump win Arizona or didn’t he?

This turned out to be an epistemological puzzle. You see, both sides are gigantic liars, so whom to believe?

In this instance, the media were telling the truth, because the truth favored them, and Trump was lying, because it didn’t favor him.

But thanks, media, for so debasing yourselves with idiotic lies over the past five years — e.g., Russian collusion, the “Access Hollywood” tape, Trump’s remarks on Charlottesville — that I had to look up a basic fact question for myself because I simply couldn’t trust you.

Trump lost Arizona. The hand recount was conducted by a hardcore conservative Christian, Doug Logan, famed for his integrity, and who was, therefore, viciously attacked by liberals. The recount was ordered up by Trump Republicans in the Arizona legislature. It was paid for by Trump supporters.

If you don’t believe Logan, right-wingers, you won’t believe anyone, except the guy who promised to build a wall; bring manufacturing home; and end anchor babies, the carried interest loophole and the war in Afghanistan — but didn’t do any of those things.

Logan’s hand recount of the ballots resulted in Biden receiving 99 more votes and Trump receiving 261 fewer votes. The report is here in black and white.

When Trump says, We have conclusively proven that we won, he’s just doing the salesman thing he always does, telling you that a used car is a fantastic deal, an amazing car, runs like a top!

But the transmission just fell out.

I’m telling you, it’s a humdinger!

Yeah, and we have a big, beautiful wall. Thousands and thousands of miles.

File this under: At Least He Was Thinking of Us, Briefly.

Typical Trump. He talks a good game, then one person raises an objection and he says, OK, I’ll just tell my supporters I wanted to do it.

Of course, the Times’ take is: Isn’t he awful? Yes, New York Times, because he didn’t do it. Not because he said he would.

Man accused of raping woman on train is illegal immigrant, was not deported despite history of sexual crime