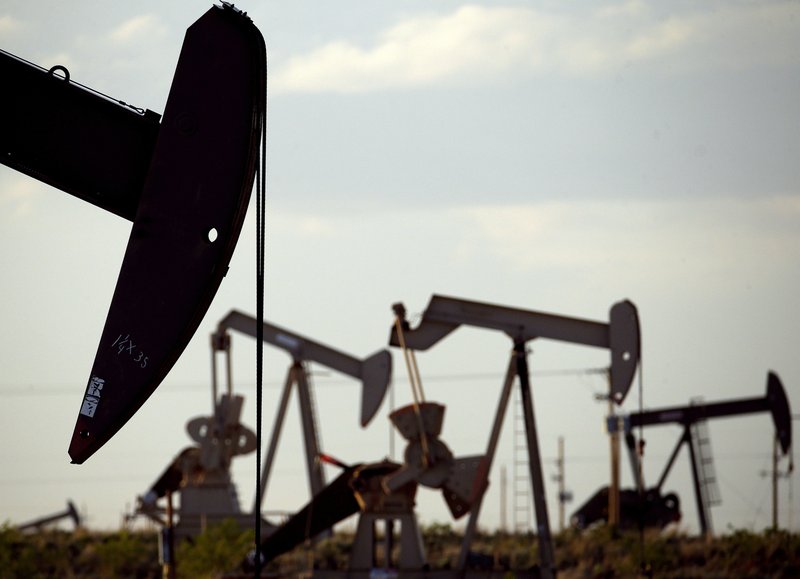 FILE – In this April 24, 2015, file photo, pumpjacks work in a field near Lovington, N.M. Oil and gas development infused $2.8 billion into New Mexico coffers during the 2020 fiscal year and marked its second-highest total revenue ever reported despite a global price war and plummeting demand amid the coronavirus pandemic, according to a report released Monday, Dec. 21, 2020. (AP Photo/Charlie Riedel, File)

Top Republicans in the state as well as local leaders in communities that border the Permian Basin — one of the most productive regions in the U.S. — say any moves to make permanent the suspension would be economically devastating for the state. Half of New Mexico’s production happens on federal land and amounts to hundreds of millions of dollars in royalties each year.

Congressional members from other western states also are raising concerns, saying the ripple effects of the moratorium will hurt small businesses already struggling because of the pandemic.

“During his inauguration, President Biden spoke about bringing our nation together. Eliminating drilling on public lands will cost thousands of New Mexicans their jobs and destroy what’s left of our state’s economy,” Carlsbad Mayor Dale Janway told The Associated Press on Friday. “How does that bring us together? Environmental efforts should be fair and well-researched, not knee-jerk mandates that just hurt an already impoverished state.”

In Utah. the state’s delegation asked for Biden to reconsider what they called an arbitrary decision. While it’s common for an incoming administration to pause high-level agency decisions, they argued that such a widespread suspension of routine permitting decisions normally made in the field is unprecedented. Industry groups said the order effectively brings all regulatory activity to a halt, from routine requests that arise during the normal course of business to requests for rights of way for new pipelines designed to gather more natural gas as part of efforts to reduce venting and flaring — practices that Democrats have targeted in their fight against climate change.

“It really has the opposite intent,” said Robert McEntyre, spokesman for the New Mexico Oil and Gas Association. “It means some natural gas is not going to be captured, and that’s not what operators want to do. They want to capture it and send it to market.”

New Mexico’s sole Republican in Congress, freshman Rep. Yvette Herrell, was the only member of the state’s delegation to speak out publicly after Biden’s order was issued. She said she supports Republican-backed legislation to prevent the administration from imposing a moratorium on new drilling permits on federal lands. The issue has been a thorny one for Democrats in New Mexico, where the oil and gas industry has been vilified over pollution concerns despite its role as the state’s top economic driver. Aside from funneling revenues to the state’s coffers, the industry supports about 100,000 direct and related jobs.

Gov. Michelle Lujan Grisham’s office told the AP Friday that the administration is reviewing the federal action and the short- and long-term fiscal implications for the state.

“Certainly we all understand the critical importance of this industry to New Mexico’s bottom line and of the imperative to diversify our state economy and energy portfolio,” Lujan Grisham spokeswoman Nora Meyers Sackett said in an email.

Steve Pearce, chairman of the state Republican Party, said drilling was beginning to pick up in New Mexico’s share of the Permian Basin because of rising oil prices. But he said he’s concerned that activity could evaporate.

“I think we’re going to see companies choosing not to invest in New Mexico and take their jobs and drilling to Texas just 3 miles away,” Pearce said. “They can just scoot across the border where they don’t have federal lands.”

The executive order includes an exception giving some senior U.S. Interior Department officials authority to approve actions that otherwise would be suspended. But industry officials expect there to be a bottleneck given the amount of requests nationwide.

The order has drawn praise from environmentalists, who have been seeking to rein in development across the West.

“Any step toward fixing the broken federal oil and gas leasing program is a step in the right direction,” said Mark Allison, director of the group New Mexico Wild.

In New Mexico, activists have been pushing to stop drilling outside the boundaries of Chaco Culture National Historical Park, saying there are culturally significant areas that could be damaged by unchecked development. The fight has spanned both Democrat and Republican presidential administrations.

A coalition of groups on Thursday amended an ongoing lawsuit, seeking to overturn the sale of 42 leases that cover nearly 70 square miles (181 square kiometers) in the area. The groups argue that the U.S. Bureau of Land Management rushed public comment on the leases.