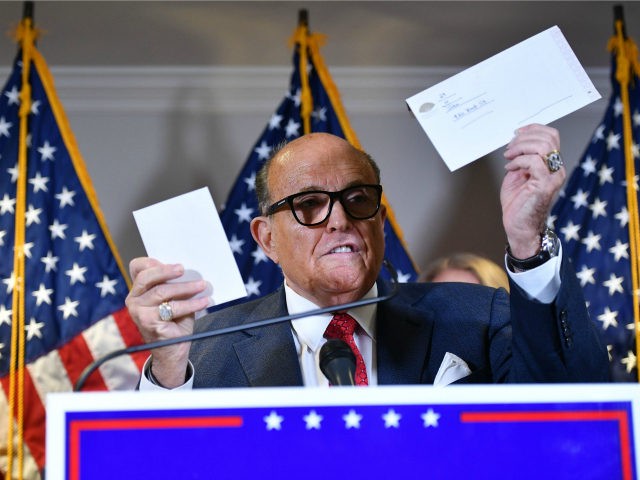 Rudy Giuliani, President Trump’s lawyer, blasted members of the establishment media during a Thursday press conference, contending that they are failing to do their job by “falsely” reporting a lack of evidence in Trump’s election disputes in key swing states.

“There are many more affidavits here. I’d like to read them all to you, but I don’t have the time. You should have had the time and energy to go look for them,” Giuliani said, telling the reporters in the room that it is, quite literally, their job.

“It’s your job to read these things and not falsely report that there’s no evidence. Do you know how many affidavits we have in the Michigan case? Two hundred twenty affidavits. They’re not all public, but eight of them are,” Giuliani continued before laying out the claims made by four affiants alone.

They reported an incident that “under any other circumstances would have been on the front page of all your newspapers if it didn’t involve the hatred that you have, the irritation — pathological hatred — that you have for the president,” Giuliani said.

The former New York City mayor detailed their claims of a truck pulling up to the Detroit Center in the dead of the night, which they say was filled with ballots in garbage cans, paper bags, and cardboard boxes.

“The people thought [the truck] was food, so they all ran to the truck. It wasn’t food. It was thousands and thousands of ballots, and the ballots were in garbage cans, they were in paper bags, they were in cardboard boxes, and they were taken into the center,” he said.

Giuliani said the ballots were put on tables. At the time, “they thought all the Republican inspectors had left,” but two remained, as well as an employee of Dominion.

The affiants claimed that “every ballot that they could see, everything they could hear, these were ballots for Biden.”

“When they saw a ballot, these were ballots only for Biden, meaning there was no down ticket. Just Biden. Many of them didn’t have anything on the outer envelope because these ballots were produced very quickly, very swiftly,” he explained.

“I didn’t see that. I don’t know that, but for the fact that three American citizens are willing to swear to it, and we’re not going to let them go to court and do that?” he asked:

The issue expands far beyond Michigan, he added.

“This happened in Pennsylvania. This happened in Michigan. Michigan probably, right now, if I count up the affidavits, just one case alone … the case we dismissed today because that case was attempting to get the Wayne County Board of Supervisors to decertify,” he said.

“Well, they did. They decertified. That case has 100 affidavits,” he said. Those allege the improper counting of ballots, people voting three and four times, as well as changing and backdating ballots “to the point of at least 300,000 illegitimate ballots that we can specifically identify.”

On Wednesday, two Republican members of the Wayne County Board of Canvassers in Michigan rescinded their votes to certify the election results, alleging harassment and bullying.

“The margin in Michigan was 146,121, and these ballots were all cast basically in Detroit, that Biden won 80-20. So you see a change as a result in the election in Michigan if you take out Wayne County, so it’s a very significant case,” Giuliani added.