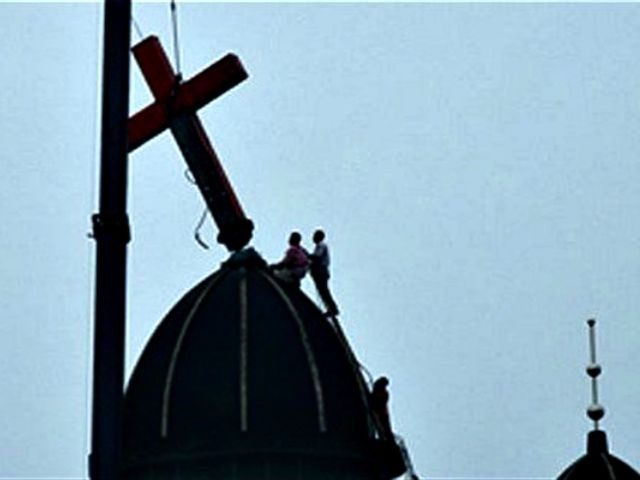 The Chinese Communist Party (CCP) has continued its program of “Sinicization” of religion by channeling religious fervor in the country toward the Party rather than God, the Christian Post reported this weekend.

In May, an official in the eastern province of Shandong raided the home of a local Christian and hung pictures of Mao Zedong and Xi Jinping on the wall in place of Christian images.

“These are the greatest gods. If you want to worship somebody, they are the ones,” the official told them.

This year, China’s “social credit system” was scheduled to become fully functional, assigning points to each individual based on how much the Communist Party approves of them and using their rating to control their behavior and access to certain benefits..

“There are fears that China’s new ‘social credit system’ – designed to reward good citizenship and punish bad – will be used to discriminate against Christians,” wrote the Catholic charity organization Aid to the Church in Need in a 2019 report.

The fears are tied to “cash rewards for those who inform on underground churches and other ‘unofficial’ places of worship,” indicating that the government might also reward the persecution of Christians with high “social credit” scores.

According to the religious liberty magazine Bitter Winter, the CCP is now using state welfare benefits as leverage to coerce people into worshiping the Party rather than Jesus. In April, for instance, party officials visited the homes of Christians in Linfen, in the northern province of Shanxi, ordering those who receive welfare payments from the government to remove crosses, Christian symbols, and images in their homes and replace them with portraits of China’s communist leaders. The officials threatened the Christians that non-compliance with the order would result in suspension of their welfare subsidies.

“All impoverished households in the town were told to display Mao Zedong images,” a local house church preacher said. “The government is trying to eliminate our belief and wants to become God instead of Jesus.”

Officials have often made good on their threats, ruthlessly suspending benefits to Christians who fail to give up their devotions. Communist authorities cancelled the government subsidies of one elderly Christian woman from Shangqiu city in Henan after they found an image of a cross posted on the door of her home.

“They tore it down immediately,” she said. “Afterward, both my minimum living allowance and poverty alleviation subsidy were canceled. I am being driven to a dead end. I have diabetes and need injections regularly.”

Something similar occurred in in Xinyu city in the southeastern province of Jiangxi, when officials canceled the minimum living subsidy and a monthly disability allowance of 100 RMB (about $14) to a disabled Christian who disobeyed government orders and continued to attend worship services.

Another Christian living in Jiangxi’s Poyang county — a woman in her 80s — reportedly stopped receiving government aid after she said “Thank God” after receiving her monthly 200 RMB (about $28) subsidy in mid-January.

“They expected me to praise the kindness of the Communist Party instead,” she said.

In another case, local officials entered the home of a member of a state-sponsored Three-Self church and tore down all Christian images, including a calendar with an image of Jesus, and posted a portrait of Mao Zedong instead.

“Impoverished religious households can’t receive money from the state for nothing — they must obey the Communist Party for the money they receive,” the official declared.