We were told that the governmental interest in ensuring that hospitals aren’t overrun with too many COVID-19 patients was so strong that it superseded the Bill of Rights. All businesses had to be shut, masks must be worn, church services had to be canceled. As Chief Justice John Roberts said in upholding California’s ban on church services, “When those officials ‘undertake to act in areas fraught with medical and scientific uncertainties,’ their latitude ‘must be especially broad.’”

The very first action one would expect a government to undertake to stem the tide of a virus is to not purposely admit people sick with acute cases of the virus from countries with substandard health care. Cross-border travel is not a fundamental right like free movement within the country and from state to state or the right to earn a living, assemble, and worship. Plus, cross-border travel is the ultimate super-spreader.

Amazingly, at a time when politicians and media figures are pushing more lockdowns because of a rise in cases in some states, they fail to inform you that the biggest factor driving the most serious rise is coming from Mexico and is taking place in our southwest border counties. Thus, they are using the malfeasance of our government, which did not fully lock down the border, as a pretext to lock us all down within our own states.

As I’ve noted in recent days, most of the spike in cases is coming from the discovery of more cases through mass testing, antibody tests, multiple positives for one individual, reporting anomalies, universal testing of non-COVID-19 hospital patients and a new way of reporting “probable” cases. This is why, across the country, we are still seeing a decline in ICU admissions and fatalities. Most of the new cases are among younger and healthier people who are largely asymptomatic. However, there is one place where we have been seeing a spike in serious cases and even deaths since May: the border counties of California, Arizona, and Texas.

In Hidalgo County, Texas, last Monday, there were three deaths, more than at any time during the peak.

Mayor Ambrosio Hernandez, the mayor of Mission, Texas, has already instituted a nighttime curfew on the residents of his city thanks to the surge. “Mexico is under reporting by three to five times and when you look at that and the infrastructure among the Rio Grande Valley, meaning doctors nurses, hospitals and ICU beds and if we have to take care of our population here and then uncontrolled infections coming across, because they’re going to seek help, you’re going to totally overwhelm the system and that could be devastating,” Hernandez said.

KRGV reported that there is a shortage of remdesivir in the Rio Grande Valley because of the increase in sicker patients, which has doubled over the last month. Remdesivir has been distributed by the federal government for hospitals to use on patients with serious cases.

What is causing this surge of clearly sicker patients in Texas’s Rio Grande Valley, which is the opposite of we are seeing in the rest of the country? Likely, the same thing we are seeing in the border counties of California and Arizona. In Imperial County, California, the San Diego Times reported last month that two hospitals had to shut the doors to more patients “after admitting scores believed stricken with the virus from Mexico’s nearby border town of Mexicali.”

Imperial County is one of California’s least densely populated counties, yet at 40.1 hospitalizations per 100,00 residents, it had the highest rate of coronavirus hospitalizations in the state. That is more than twice the rate of Los Angeles County, which is the largest county in the country and is 57 times more populous than Imperial County.

While it’s likely that illegal aliens are still coming over the border to use our hospital system, we know for sure that green card holders and dual citizens are definitely coming for the purpose of using the hospitals. Already in May, the Washington Post reported that border hospitals were “flooded” with dual citizens and “Americans working in Mexico or visiting family there.”

According to the Post, “approximately half of the coronavirus patients in several California border hospitals, including El Centro Regional Medical Center, are recent arrivals from Mexico.” That figure jumped to 60 percent for Scripps Mercy Hospital Chula Vista, which is located 10 miles away from the San Ysidro port of entry, between May 31 and June 2.

There is a similar dynamic in Arizona. Yuma Regional Medical Center saw a tripling of its cases in late May along with 13 deaths. As border reporter Todd Bensman of the Center for Immigration Studies commented:

I’ve been to Yuma many times. It’s a tiny community on the Mexican border where any entirely local outbreak generating 13 deaths is simply implausible on its face. Not a single word addresses who the patients are and from where they came. The June 7 [New York] Times story finally noted that many of these patients had come in from Mexico, albeit with the questionable assertion that all were green card holders and American citizens.

So border towns have now gone back into lockdown and have even instituted a curfew, infringing upon rights of Americans, all because of an outsized obsession with the phantom “right” to travel across our border. After suffering through the initial deadly wave of the virus, America has now re-imported the original deadly version from Mexico.

Once the spread starts at the border, who’s to say it won’t travel? Kyle Lamb, a data analyst who joined me on my podcast Friday, noted that 24 border counties accounted for 3.6% of the total positive cases over the past 21 days. Prior to May 29, they accounted for just 0.7%.

This may not seem like much, but this spike alone can explain the difference in 4.5% positive cases nationally and 5.1% this week. It doesn’t even include other counties in those southern states, ONLY counties bordering Mexico…

37 people are talking about this

But not all of them will stay at the border. Lamb also observed that Hispanics now account for 33.7% of all positive cases and 30 percent of hospitalizations.

There is unquestionably a statistical anomaly here due to people coming to the U.S. from Mexico or other Caribbean/Central America countries. Check out these two oddities. You can see a spike with Latino/Hispanic cases and a bizarre inverted hospitalization spike. 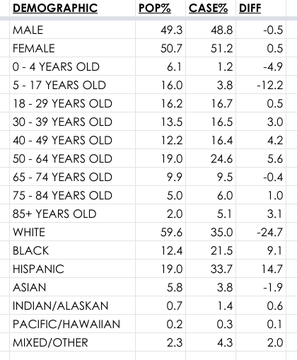 24 people are talking about this

Clearly, it’s the cross-border travel that has brought it back in. Yes, it’s true that the border counties rely heavily on cross-travel of dual citizens and green card holders. But the Bill of Rights for Americans living in America was deemed nonessential and had to yield to the lockdown. Why wasn’t the international border locked down as strongly, especially with people coming across for the express purpose of getting treatment for the virus we were supposed to keep out?

Remember, while the virus peaked in Europe in March and in America in April, it didn’t peak in Latin America until well into May. Any dual citizen who wanted to come home should have done so in March. Once the border was closed, it should have remained closed, because we were importing more serious cases from Mexico after we had already gone through the peak.

Then there are the illegal aliens who come across to work in the fields. The media went berserk when Florida Gov. Ron DeSantis noted that the spread in Florida was mainly among Hispanic migrant workers, as if he was singling out Hispanics. But the operative point wasn’t about race but rather geography. Migrant workers clearly brought in the virus to many southern states later in the cycle, thanks to the work season. We need to focus on where the problem is coming from instead of pushing lockdown for all Americans.

What has become clear in recent weeks is that racial warfare and rioting were able to trump even the new cult of social distancing. Now we know that cross-border travel is on the same superseding level. The media can have their cake and eat it too – keep the border open and then use the fallout to push more lockdowns on us.