Late last week transcripts were finally released from interviews under oath three years ago in front of Congress after lying Adam Schiff was pressured by the Acting Director of National Intelligence Richard Grenell to release the documents.

As we reported on Friday, the release of documents from the Intel Community that were held up by corrupt liar, Rep. Adam Schiff, show shocking revelations that destroy the Deep State’s many lies. The biggest lie was the tale that Russia hacked the DNC and then gave the hacked emails to WikiLeaks, who in turn released them before the 2016 election.

The whole story was a lie!

Interesting admission in Crowdstrike CEO Shaun Henry’s testimony. Henry is asked when “the Russians” exfiltrated the data from DNC. 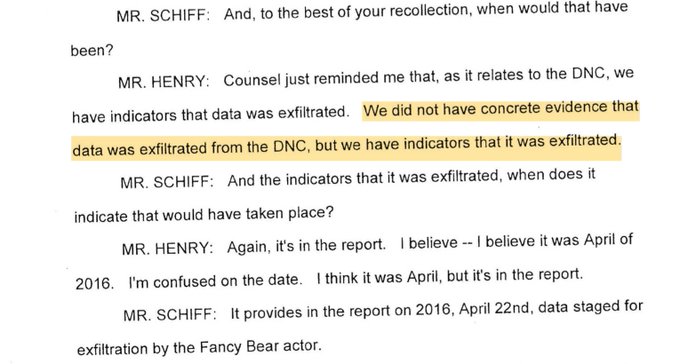 This brings us to Roger Stone, the last American indicted by the Mueller gang.

On January 23, 2019, Stone was indicted for a number of frivolous crimes where he was accused of lying to Congress. Looking at the indictments, Stone had a good case that he did not lie.

In his case, Stone claimed that the DNC servers in 2016 were never examined by Crowdstrike and asked for proof that this was the case, because it was pertinent to his case. Stone was indicted for lying to Congress about Russians hacking the DNC and sending the hacked emails to WikiLeaks:

After speaking w/ my @FBI sources & a @nytimes reporter with direct knowledge of the handling of the @DNC server it’s true – there was no direct examination or physically custody of the DNC server – an “image” (i.e. copy) of the server was examined only: https://www.thegatewaypundit.com/2019/05/roger-stone-asks-for-evidence-russians-hacked-dnc-server-court-wont-provide-it-because-they-dont-have-the-proof/ …

Guest post by Joe Hoft Roger Stone is requesting proof that the Russians hacked the DNC server, as was reported in the Mueller report.  He claims if the Russians didn’t hack the DNC, his case should…

4,173 people are talking about this
It was uncovered in the Roger Stone case that Crowdstrike gave the US government three “draft reports” on the so-called hack by Russia which were full of redactions and the FBI just took Crowdstrike’s reports at face value. The FBI never inspected the DNC servers. It was also reported that the DOJ never received the unredacted copies of Crowdstrike’s reports:

I missed the previous DOJ filing, but this seems significant. 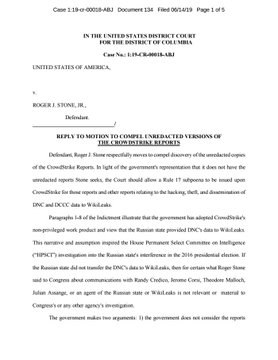 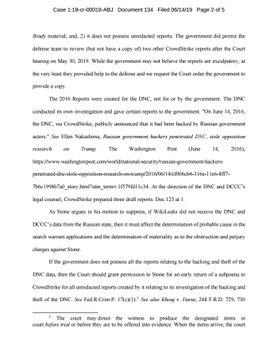 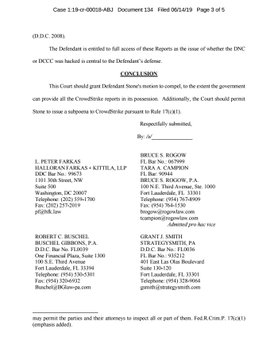 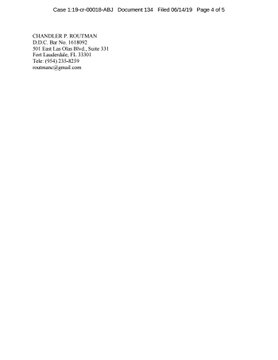 The DNC’s lawyer provided the Crowdstrike reports to the Govt. He said the redacted parts weren’t relevant to the investigation.

The FBI never looked into it. 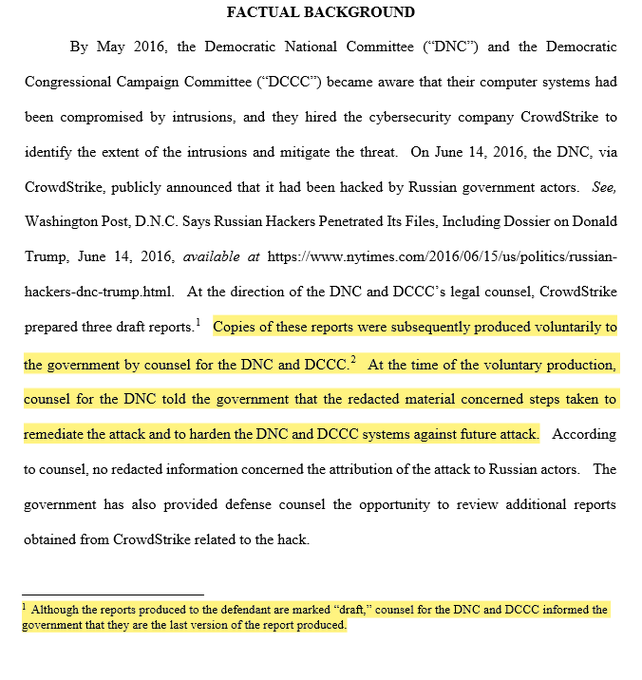 1,346 people are talking about this
Stone pressed the DOJ for support that Russia hacked the DNC and sent the emails to WikiLeaks, and the DOJ eventually responded that the investigation of the 12 Russian GRU officers noted in the Mueller investigation gathered evidence that Russia hacked the DNC systems and sent the emails they hacked to WikiLeaks (Organization 1):

The DOJ went on to say that they were not going to provide Stone the data from the GRU case:

This case was of course run by the Deep State dream team who recently made the news for stepping away from the Stone case in protest: Unfortunately for Deep State actors Kravis, Marando, Jed, Zelinski and Liu, we now know Crowdstrike did not confirm Russia’s actions after they ‘hacked’ the DNC.  To date there is no evidence that Russia sent emails to WikiLeaks.

It looks like these Deep State actors lied to the court.  This is serious.

President of Tanzania Didn’t Trust WHO So Sent Samples of Sheep, Goats, Bunny, Trees, Fruit and Car Oil for COVID Testing — The Results Are In