New court papers that have been released to the public show that former President Barack Obama had direct knowledge of the deep state scheme to railroad General Michael Flynn. The documents pertain to former Justice Department official Sally Yates, who testified that Obama made her aware of the phone call between Gen. Flynn and a Russian diplomat. This was what was ultimately used to begin the process of railroading Gen. Flynn.

“Yates, along with then-FBI Director James Comey, then-CIA Director John Brennan, and then-Director of National Intelligence James Clapper, were at the White House to brief members of the Obama Administration on the classified Intelligence Community Assessment on Russian Activities in Recent U.S. Elections,” the document reads.

“President Obama was joined by his National Security Advisor, Susan Rice, and others from the National Security Council. After the briefing, Obama dismissed the group but asked Yates and Comey to stay behind,” it adds.

The document gets juicier from there when Obama reportedly asked about the Flynn railroading and indicated that he had direct knowledge of the situation.

“Obama started by saying he had “learned of the information about Flynn” and his conversation with [Russian diplomat Sergey Kislyak] about sanctions. Obama specified that he did not want any additional information on the matter, but was seeking information on whether the White House should be treating Flynn any differently, given the information,” the document states.

“At that point, Yates had no idea what the President was talking about, but figured it out based on the conversation. Yates recalled Comey mentioning the Logan Act, but can’t recall if he specified there was an “investigation.” Comey did not talk about prosecution in the meeting,” the document continues.

Yates conveniently claims that her memory became spotty from there when it came time to divulge the specifics on the collusion going on between Obama and the deep state on how to railroad Flynn.

“It was not clear to Yates from where the President first received the information. Yates did not recall Comey’s response to the President’s question about how to treat Flynn. She was so surprised by the information she was hearing that she was having a hard time processing it and listening to the conversation at the same time,” the document reads.

From court papers: During transition, top Justice Department official Sally Yates learned about the Flynn-Kislyak phone call from President Obama himself. She was surprised. 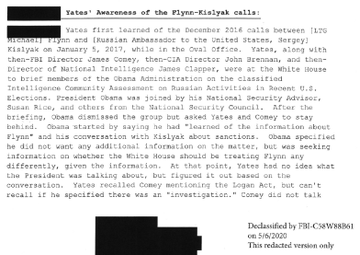 8,053 people are talking about this

Earlier today, Big League Politics reported on how the charges were dropped for Gen. Flynn and he has been completely exonerated of all wrongdoing:

The Department of Justice (DOJ) has announced that they will be dropping the case against General Michael Flynn, which has been marred with corruption and improprieties from its inception.

The Flynn case was a feather in the cap of the special investigation conducted by FBI spook Robert Mueller into Russian collusion. The deep state had hoped to make an example of Flynn, secure a guilty plea from him, and then use it to justify their continued fishing expedition to damage President Donald Trump.

However, things did not turn out the way the entrenched bureaucrats planned. The DOJ announced on Thursday that it is dropping the case “after a considered review of all the facts and circumstances of this case, including newly discovered and disclosed information.”

They came to the conclusion that Flynn’s interview with the FBI was “untethered to, and unjustified by, the FBI’s counterintelligence investigation into Mr. Flynn” and that the interview taking place on January 24, 2017 was “conducted without any legitimate investigative basis.”

Jeff Jensen, the U.S. attorney tasked with reviewing Flynn’s case, made the recommendation to Attorney General Bill Barr that the case be dismissed. Barr followed through with Jensen’s recommendation in a prompt fashion.

“Through the course of my review of General Flynn’s case, I concluded the proper and just course was to dismiss the case,” Jensen said in a statement. “I briefed Attorney General Barr on my findings, advised him on these conclusions, and he agreed.”

Although Flynn has been exonerated, the deep state and its collaborators, which perhaps includes Obama himself, must be brought to justice before the rule of law is fully restored.

DEFIANCE: Michigan Barber Vows to Stay Open ‘Until Jesus Walks In or Until They Arrest Me’