After the governor and attorney general intervened on her behalf, Dallas, Tex. salon owner Shelley Luther will be freed from jail per an order from the state supreme court.

The Supreme Court of Texas has ordered Shelley Luther be released from Dallas County jail! 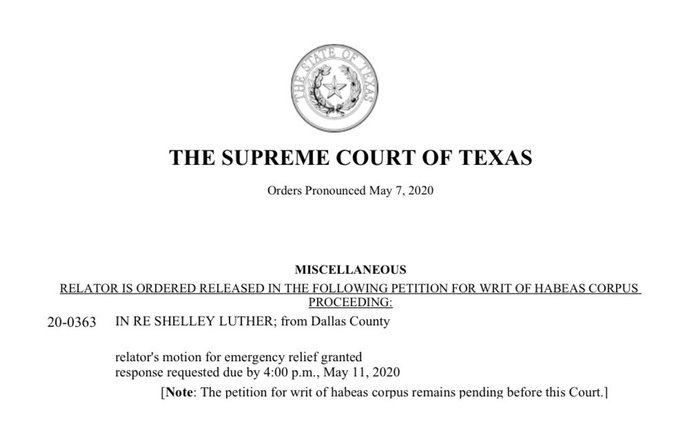 7,443 people are talking about this

Tex. Governor Greg Abbott and Attorney General Ken Paxton sprung into action after Luther was sentenced to a week in jail by an Obama-crony judge for opening her salon against government edicts.

“I find it outrageous and out of touch that during this national pandemic, a judge, in a county that actually released hardened criminals for fear of contracting COVID-19, would jail a mother for operating her hair salon in an attempt to put food on her family’s table,” Paxton said.

“The trial judge did not need to lock up Shelley Luther. His order is a shameful abuse of judicial discretion, which seems like another political stunt in Dallas. He should release Ms. Luther immediately,” he added.

“Compliance with executive orders during this pandemic is important to ensure public safety,” Abbott said in a statement on Wednesday. “However, surely there are less restrictive means to achieving that goal than jailing a Texas mother.”

“Throwing Texans in jail who have had their businesses shut down through no fault of their own is nonsensical, and I will not allow it to happen,” Abbott explained. “That is why I am modifying my executive orders to ensure confinement is not a punishment for violating an order.”

Big League Politics reported earlier this week on how Luther was called selfish by the courts for not succumbing to mass hysteria and sacrificing her livelihood to the fear gods:

Shelley Luther, a salon owner in Dallas, Tex., has been sentenced to seven days behind bars after refusing to comply with government orders to shut down her supposedly non-essential business.

A Dallas County judge reportedly gave an ultimatum to Luther that she must issue a public apology and accept fault in order to avoid jail time. However, the Salon a la Mode owner refused to demean herself beneath the robed lawyer and stood by her principled decision regardless of the consequences.

Luther stood up for herself in the court of law against the judge who claimed she was selfish for wanting to provide for her family.

“I have to disagree with you, sir, when you say that I’m selfish because feeding my kids is not selfish. I have hairstylists that are going hungry because they would rather feed their kids So sir, if you think the law is more important than kids getting fed, then please go ahead with your decision. But I am not going to shut the salon,” Luther said.

In addition to the jail sentence, she will be forced to pay a $7,000 fine as well. The state desperately wants to make an example of Luther as what will happen when a peasant steps out of line during the coronavirus lockdown.

Luther’s heroic act of civil disobedience is already paying off, as her stand has drawn attention to the cruel and capricious nature of these shutdown edicts.